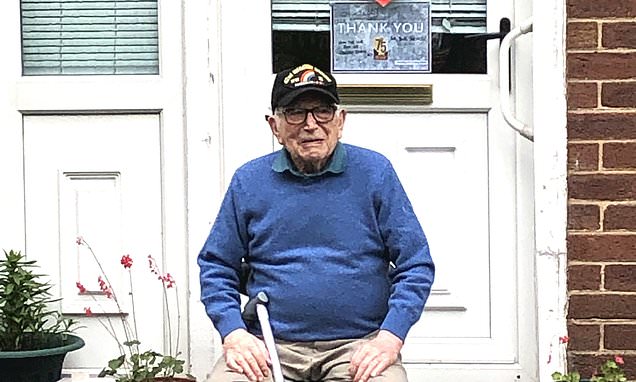 Edward ‘Teddy’ Dixon was born in New York but his family moved to Belfast when he was a young child.

He served in the US army as an infantryman in the 42nd Infantry ‘Rainbow’ Division, receiving his draft notice in 1944, and went on to help liberate the Dachau concentration camp.

Mr Dixon landed in France with his unit in December 1944 before advancing across the continent to Germany in 1945.

As well as helping to liberate the Nazi concentration camp near Munich, he also played a role in the recovery of a treasure trove of looted art stored in salt mines during the conflict.

‘After liberating 33,000 people from the horrors of Dachau concentration camp, he returned to East Belfast a hero.

‘We will remember his service and selfless heroism.’

Mr Brooks tweeted: ‘My generation will never know the fullness of the debt we owe to men like Teddy who risked all to defeat the Nazis. A hero.’

Mr Dixon’s death comes less than a week after the passing of his friend and fellow war veteran Bill Eames, from Enniskillen, Co Fermanagh.

Mr Eames, 97, served as an RAF pilot and was involved in the securing of Pegasus Bridge in 1944, among many other missions.

He described getting to know both men very well over the years through telling their stories.

He said: ‘Because of Bill and Teddy – and their generation, people of my generation, and others who came after me have never had to go to war.

‘We owe those gentlemen and their generation a debt of gratitude that we can never adequately repay. We forget that generation at our peril, otherwise we are going to be repeating the past again and again.’

He described both men as very humble, and passionate about education.

Mr Clark added: ‘They tended to be together at a lot of commemorative events because they were almost the last of that generation.

‘What really struck me about them was their passion for education, they made sure that any time they got an invitation to talk at a school or to talk to young people, they were always very keen to accept so they could listen to and talk to the children, wanting to make sure they were aware of the past.’