The Time Traveller’s Guide To Regency Britain review: A mix of telling anecdote and pithy research

Even the most devoted reader of Jane Austen might find themselves surprised at the reality of life in Regency Britain. True, a few lucky souls get to dance with Mr Darcy and go shopping for gloves in Bath.

Everyone else is more likely to find themselves falling into bed at 9pm after 16 hours of back-breaking labour, having eaten nothing more exciting than a splodge of hasty pudding – a cheap concoction of oats, milk and a knob of butter.

One good bit of news, though: whether rich or poor, Regency people are able to wash down their food with strong drink. In the early 1800s, every man and woman over the age of 15 was consuming the equivalent of 20 units of alcohol a week – enough to get them labelled a ‘problem drinker’ today. 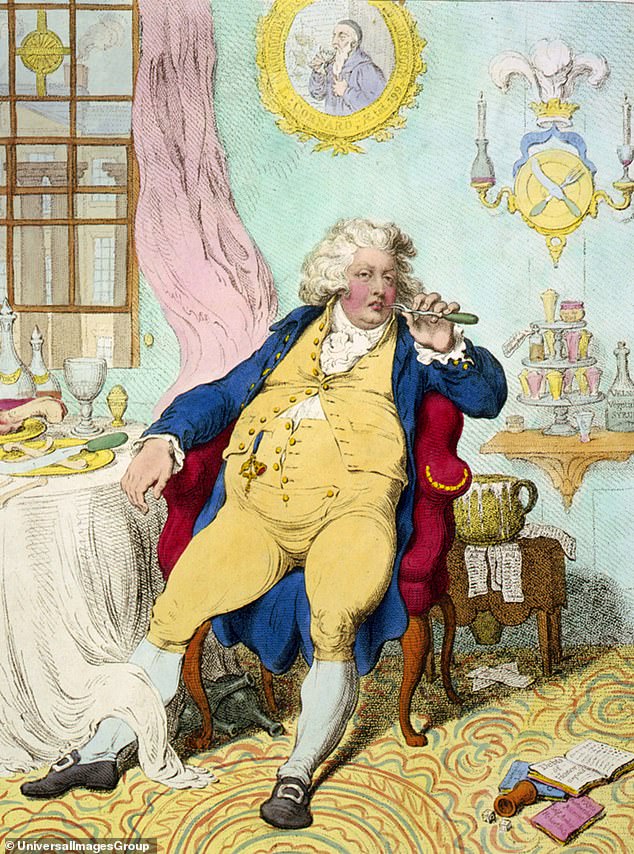 Ian Mortimer starts at the centre of the Regency world, Brighton, where ‘Prinny’ throws parties at the Pavilion (above. cartoon of the Prince Regent, ‘Prinny’, by James Gilray from 1792)

Historian Ian Mortimer has made this kind of imaginative time travel his speciality. He has already written guides to the medieval, Elizabethan and Restoration periods, and now he’s bringing that same mix of telling anecdote and pithy research to Regency Britain, that funny wedge of time squeezed between the Georgians and the Victorians.

He starts at the centre of the Regency world, Brighton, where ‘Prinny’ – aka the Prince Regent – throws glorious parties at the gaudy Pavilion, chases ladies of easy virtue and tries very hard to squeeze his increasingly large gut into his very loud waistcoats.

Prinny’s secret wife, Mrs Fitzherbert, lives in a mansion around the corner. Mortimer calls the Prince ‘an insensitive, fat pig’, and the more you read about him, the more you see his point.

There is, though, an upside to the fact that Regency society is so transfixed with flashy surface rather than authentic identity. For one thing it means that climbing the greasy pole is easier than at any point in history.

Mortimer tells us about Harriet Mellon, born the illegitimate daughter of an Irish peasant, who wiggled her way into the theatre as a mender of theatrical costumes. The playwright Sheridan cast her in his masterpiece The Rivals in 1795, and soon she is earning a colossal £600 a year.

This, though, is peanuts because by now Harriet has a very rich admirer in the shape of Thomas Coutts. On his death, Harriet inherits 50 per cent of Coutts bank in her own right, and from here she proceeds to marry a duke.

From hungry urchin to duchess was an astounding transformation and one that could not have happened at any point in history before the Regency, which Mortimer paints as a vast game of social snakes and ladders.

There are other freedoms too. As far as gender is concerned, Regency people seem far less binary than you might expect. Mortimer tells of a Colchester housemaid who worked for 30 years until, after her death in 1811, she is found to have been born a man.

Or what about James Miranda Barry, the hero doctor who performed the first fully successful caesarean in 1826? Only when his body is being prepared for a funeral does it become clear that Dr Barry is actually a woman who adopted a male persona in order to enter medical school.

Such gender-bending, and much else besides, will become unimaginable in the looming Victorian age when the bossy new bureaucratic culture will require everyone to know their place and stick to it.

Friends And Enemies: A Memoir

In this rags-to-riches-and-almost-back-again memoir, the permanently affronted conservative journalist Barbara Amiel (80 this year) relates her journey from neglected child from Hendon, North London, to successful career girl sleeping about town, through three husbands and then her fourth and final marriage, at the age of 51, to former media proprietor Conrad Black, Lord Black of Crossharbour, who was convicted and imprisoned for fraud in 2007.

To say Amiel feels hard done by is an understatement. No injury, slight or even funny look directed at her or Black is left unmentioned. At the end, in case you’ve not been paying attention, is a list of her friends and enemies, like something you might come across in a teenager’s diary.

She has had a fascinating life, and one has to admire the fact that she clawed her way out of a hideous childhood. She is brainy but, as she never fails to remind the reader, she is also physically blessed – her breasts alone receive several pages of attention.

Her frankness is breathtaking, with numerous startling mentions of her sex life. Dogs appear regularly – while her lover looks on, a Doberman licks whipped cream off her nude body (‘probably horrible artificial stuff’).

Another canine, Gogo, she kicks almost to death. Perhaps this sociopathic behaviour is down to her lifelong codeine addiction and her appalling diet of Carnation milk and Ribena.

Her time living on Manhattan’s swanky Upper East Side provides much entertainment. Amiel had to try to keep up with all the rich people the Blacks know by spending vast amounts of money on jewellery, Hermès handbags and Parisian haute couture – she doubled the amount every year.

But a lot of the fun goes out of the story when Lord Black is arrested, because Lady B makes a miserable prisoner’s moll.

Friends And Enemies seems to be mostly about her settling old scores. ‘I have no forgiveness in me,’ she concludes. No kidding.