A mural of Winston Churchill wearing stockings and suspenders and giving the ‘V’ sign has attracted complaints from locals who claim the hand gesture is ‘offensive’.

The mural of the wartime leader wearing lingerie was painted on a side wall of the Sandpiper guest house in Brighton by illusive local artist who goes by the name of Horace.

Guest house owner Mr Phillips – who only provided his last name – received a call from Brighton and Hove City Council who told him they had received complaints about the mural.

Mr Phillips – who was given three days to alter the image – called Horace as he feared local authorities would ‘ruin the painting’.

But the council changed its mind at the last minute, claiming the ‘decision had been overturned’, Mr Phillips said.

Depictions of Winston Churchill have been hit with mass outrage this year from critics who have accused the former-PM of racism and colonialism. 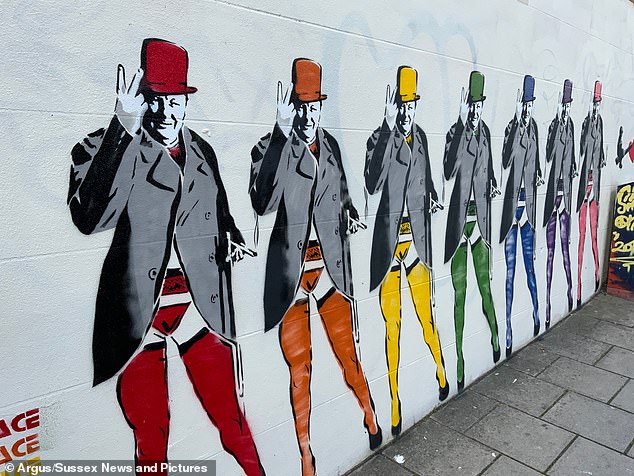 A statue of the former-PM was branded with the words ‘was a racist’ during demonstrations in the summer, prompting authorities to barricade it in before the next wave of protests.

A spokesman for the council said it had only received one complaint and mural would not need to be changed as the gesture was ‘historically authentic’.

Horace was amazed that the mural only garnered criticism for the V sign – and not the ladies’ underwear.

He said: ‘I was surprised when Mr Phillips contacted me, I thought the image might be controversial, but because of the stockings, not the V-sign.

‘It never crossed my mind that people would be offended by that as that’s what he was doing. As a result, I haven’t changed it.’ 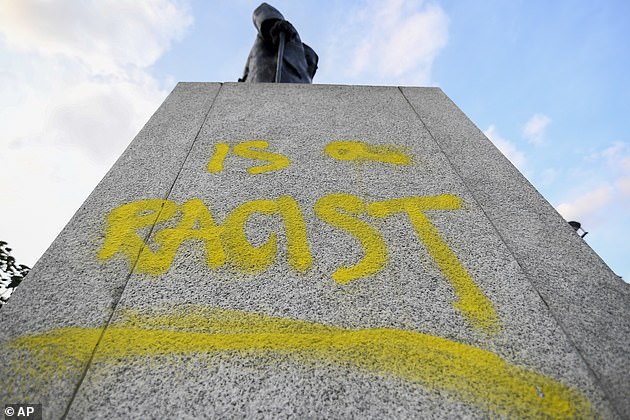 Mr Phillips said he was ‘relieved’ at the council’s decision not to order that the painting be changed.

‘It is a victory for the Sandpiper guest house,’ he added.

The painting called Churchill rainbow was created as part of a series featuring well-known Brightonians and those with links to the city.

Winston Churchill went to school in Hove and, as the artist couldn’t find a picture with legs, stockings and suspenders were added to the mural instead.

Horace has also painted portraits around the city of rock singer Nick Cave and former model Katie Price, depicting her as Wonder Woman.

A council spokesperson said: ‘A couple of weeks ago we had one complaint about it, on the grounds that the V-sign was seen to be an offensive gesture.

Depictions of Winston Churchill (a statue in London, pictured) have been hit with mass outrage this year from critics who have accused the former-PM of racism and colonialism 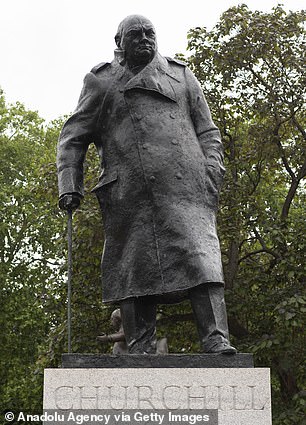 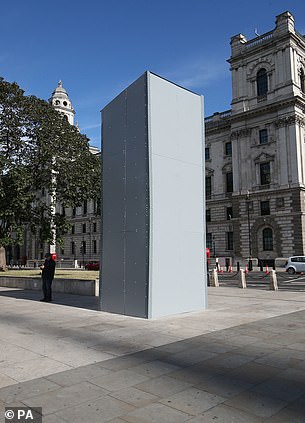 ‘The member of staff who asked for it to be removed was advised by the owner that the gesture was in fact historically authentic.

‘Once we established that this was indeed the case we got back to the owner to apologise and to advise that the mural would not need to be changed.’

Depictions of Winston Churchill have been hit with controversy this year amid the global Black Lives Matter Movement.

Some campaigners have criticised Churchill for racism, colonialism and his handling of the Bengal Famine to the dismay of the politician’s supporters.

Churchill’s statue was defaced with the words ‘was a racist’ during demonstrations in June.

Following the graffiti, steps were taken to fully cover the statue which sits in a prime location on Parliament Square.

It was completely encased in a protective box in order to deter any further attacks.