Look, I realise this is going to sound pathetically sad, but I’m going to confess anyway. My favourite part of the year isn’t Christmas, nor is it my birthday – it’s when I get the Big Coat out of the cupboard. I adore the rituals of getting it winter-ready: taking it to the dry-cleaners, tightening up buttons, cleaning off bits of mud. Forget political tribes: Britain could be divided into those who vacuum pack or mothball their Big Coat, and those who shove it in a cupboard and forget about it until autumn.

Admittedly, the annual treat of seeing what Past Me left in the pockets is bittersweet: receipts from before lockdown, lipsticks left with no thought as to the reality of make-up and masks. But putting on the Big Coat is still a real thrill, demarcating the change in the seasons. And I’m not alone; many of us live for Big Coat season, that period between Halloween and Christmas when our cosiest outerwear comes out of storage and we feel ready to face anything thanks to its protective warmth and deep pockets.

Brainwashing about the power of a Big Coat starts when we’re children, with Lucy stepping into Narnia in her borrowed fur, and Paddington in his bright blue duffel. I was enchanted by Hunter Davies’s books about tween heroine Flossie Teacake, who magically turns into an 18-year-old cool girl whenever she borrows her elder sister’s coat – it perfectly captures the protective and adventurous feeling you get when you put it on. You’re more confident, more excited, warm. 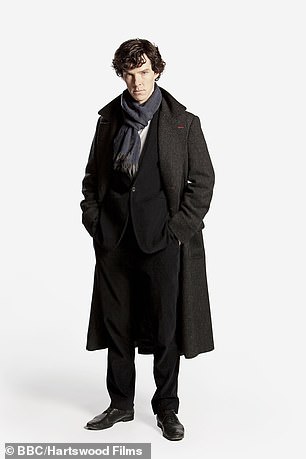 Benedict Cumberbatch, as Sherlock Holmes, sent the overcoat into overdrive

Since Benedict Cumberbatch’s Belstaff overcoat in Sherlock emphasised the detective’s no-nonsense capability (and led to a run on similar coats), the Big Coat has developed almost a supporting role. Viewers have been going as wild for Nicole Kidman’s ravishing duster coats in The Undoing as they have the murder mystery plot, while The Queen’s Gambit’s costume designer Gabriele Binder designed a ravishing cashmere-wool coat for Anya Taylor-Joy to wear in the final scenes to make her look like the White Queen chess piece come to life.

Whether you’re wearing it to a meeting or, as is more likely this winter, to the kettle, the Big Coat’s size and silhouette make it the outdoor equivalent of a dressing gown. ‘I feel like I’m wearing my duvet – only everyone who sees me thinks I’m actually well-dressed,’ says one friend. Another, who has a seriously high-powered job more usually associated with a cashmere camel trench, adores mixing bright colours and tactile fabrics. If you’ve worked your way to the top, wear what you like and love it.

Having serious pockets helps, both for attitude and carrying essentials, as does having sleeves large enough to cope with extra layers. ‘For me, what’s most important is that the coat is fitted enough to look elegant, but big enough to fit a proper jumper underneath,’ says my friend Sarah. ‘It’s amazing how many designers get this wrong.’ Indeed, earlier this year I regretfully sold a beautiful Laura Ashley riding coat because I couldn’t get around the sausage-arm effect that came from wearing layers underneath.

I should have waited. With so many new prospects on the horizon each year, it’s fitting that Big Coat season has its own life cycle for when old favourites fall out of favour. Thanks to charities such as Hands On London, whose Wrap Up London drive each November collects thousands of warm coats that are distributed to the capital’s homeless population, there is a bright future for unwanted Big Coats. There are further Wrap Up projects nationally, with collections in cities including Leicester, Manchester, Glasgow and Birmingham.

The search for the perfect Big Coat would outfox Goldilocks: some are too thin, some the wrong shape, very few are just right. Further short shrift is given to drop shoulders, which do nobody any favours. If you’re tall, you look like Judd Nelson at the end of The Breakfast Club, and if you’re short, as one exasperated wearer puts it, ‘that join now takes place around my wrists’. Wool, a dream fabric, tends to be expensive, which is why so many Big Coat finds happen in charity shops. I found my ideal in the Royal Trinity Hospice shop: a black Aquascutum wool overcoat with metal buttons that cost £75. I’ve spent at least twice that on maintenance since, but it’s fine. As anyone knows, the right Big Coat becomes a part of the family.

On cold days, I swap between that coat and a vintage red woollen cape that I can wear millions of layers underneath. For the worst winter weather, I have a smart orange duvet coat from the Canadian brand Point Zero. Bright colours make the winter blues easier to deal with, and that is a superpower worth having. That is Big Coat Energy.

Our six best – and cosiest – cover-ups