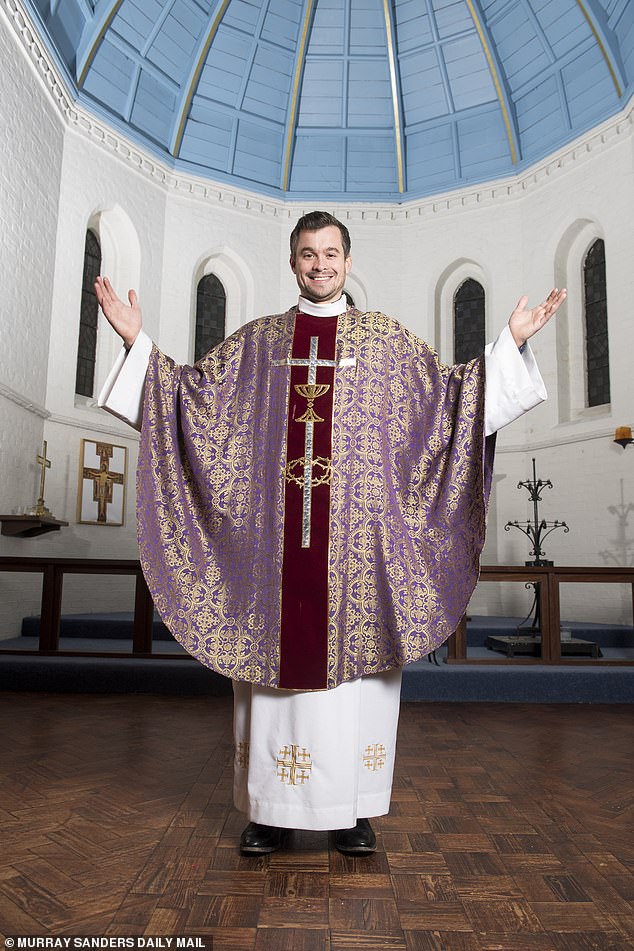 Thousands flock to Reverend Chris Lee’s Instagram page – for his sex appeal as much as his 60-second sermons. Julia Llewellyn Smith meets the heart-throb vicar on a multimedia mission

With Reverend Chris Lee receiving 100-odd direct messages daily on Instagram, you might expect it to be questions about the church, flower rota or Christmas service. Instead, what Chris often finds is explicit selfies from ardent female followers.

When it comes to sexy men of the cloth, until recently the only candidate was the tormented ‘hot priest’ in the BBC hit Fleabag, played by Andrew Scott. But with 176,000 Instagram followers – more than twice that of the Church of England and Archbishop of Canterbury combined – there’s no doubt that Chris is our first real ‘hot’ (not to mention viral) vicar. His YouTube videos have been viewed 400 million times and he has appeared on This Morning, where Holly Willoughby described him as ‘the nation’s favourite vicar’.

But this year, Rev Chris has really struck a chord with the nation – particularly through his wildly popular, always uplifting 60-second sermons. As our spirits plummeted, his follower count soared by some 60,000, and in April this year he announced he’d signed his first writing deal, a self-help book called The OMG Effect based around the inspirational videos he shares online.

Chris discovered the power of social media six years ago when his brother-in-law Ollie, who runs two popular South Korean YouTube sites, asked him to film some videos called British Priest Reacts. Wearing his dog collar, he tried Korean food and discussed music videos – with the clip of his reflections on Ariana Grande’s song ‘God Is A Woman’ being viewed nine million times.

As Chris’s Instagram following exploded, he realised he had a vast audience for his messages, ‘The average young person spends four hours a day on social media so you have to meet them where they are.’

Of his heart-throb status, he simply says: ‘Sex sells. People found a young vicar online and were like “Ooh!” You hear weird stuff about me being “naughty” and a “hot vicar” – but I don’t see that. It’s more that vicars have the image of being a bit heavy and old and I’m neither of those things.’

Before lockdown Chris’s fans (he’s particularly big in South Korea, the Philippines and Australia) would travel to his church – St Saviour’s in Acton, West London – to demand selfies. One even accosted him when he was conducting a funeral. Now parishioners guard the doors, reminding visitors that church is a sacred space. ‘I’m happy to do selfies outside, but not in the church,’ Chris says.

When lockdown hit, Chris moved his services online but hackers gate-crashed one Zoom congregation – something that happened to many other churches all over the world, until the platform improved its security procedures. ‘They took over one of our screens and posted dodgy material involving Barack Obama superimposed on something,’ he recalls. ‘We managed to close it down so quickly I don’t think some parishioners noticed what was going on. One left in disgust, others just laughed it off.’

He managed to track the activity to Canada – someone had put details of the service and how to join on social media. ‘I thought I’d be able to shrug it off as just the actions of some 14-year-old but, actually, I was quite hurt,’ Chris says. ‘I lead and love these people, so I was really sorrowful. I’m the shepherd of this flock and the wolves just jumped in. I had to pray about it.’

Now back in lockdown, the church has a vetting procedure in place with passwords issued for virtual services. ‘We get people at our Zooms from all over the world,’ Chris says. ‘We even have secret worshippers from places where being a Christian is dangerous.’

Today, Chris is sitting in the chilly study in the vicarage where he lives with Jenny, a writer and director, and daughters Rose, five, and Saoirse, two. ‘She had us up at 4.50am today,’ he winces. ‘It was rough.’

A brief glance at Chris’s Instagram might fool you into thinking he’s just your average dad. The dog-collar images are outweighed by relaxed snaps of his family hanging out and pre-Covid holidays (shots of him swimming in Greece had fans particularly excited). But if you start watching his videos you realise Chris is using social media to deliver 60-second sermons on subjects such as forgiveness and hope.

Usually filmed while he’s strolling down the road, these bitesized talks are the opposite of the bum-numbing sermons that put many off church. ‘People don’t need 45-minute sermons any more,’ Chris says. ‘They’re often a bit boring and they say the same thing time and time again.’ Now he’s written The OMG Effect, summing up his key message. ‘What I’m trying to teach is, whether people believe in God or not, God loves them and knows them. He’s relevant.’

The world seems more fractious than ever but Chris’s charismatic presence attracts followers of every faith, as well as atheists. ‘There’s so much uncertainty out there – a lot of people now are looking for something more to life. So when they find me they’re like, “This guy seems authentic, he doesn’t seem like one of those ‘I’ll give you a miracle for £50’ preachers.”’

Chris’s preaching may seem incongruous on platforms largely dedicated to flaunting beautiful bodies, homes and holidays, but he says: ‘Instagram can be a superficial world but I have an opportunity to invade that space with life and love. A friend said to me, “Chris, my Instagram is full of bums and boobs, then I come across yours and it’s like a breath of fresh air.”’

Does this modest man ever feel tempted to post a particularly flattering selfie? Chris laughs. ‘Sure, I’m human and I suffer from the same seductions and temptations. I’m by no means squeaky-clean. But if I post anything that’s a bit vain, my wife will have me out. She keeps me grounded and so do the kids. When you’re sleep-deprived and changing nappies, you don’t feel like a celebrity.’

Does he think Jesus would have been on Instagram? ‘I definitely think everyone else would be filming him for their feeds. Jesus’s followers, who wrote his Gospels, would have been showing him off on social media.’ 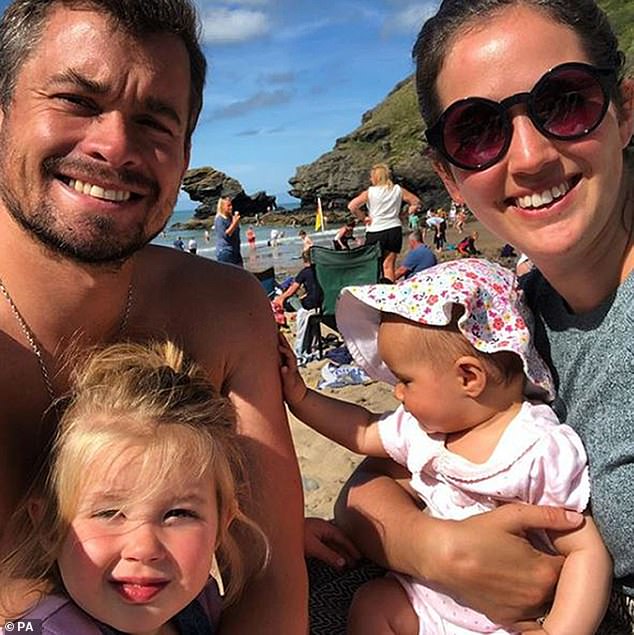 Rev Chris with wife Jenny and daughters Saoirse and Rose, on holiday in Wales, 2019

Many of Chris’s church colleagues shunned social media until the pandemic hit. ‘Suddenly all the vicars were on Instagram. The church was woken up abruptly to the fact the technological revolution was here and we needed to get on board if we were going to reach people,’ he says. After all, people were in more need of spiritual guidance than ever, with research showing a 50 per cent surge in online searches for prayer at the start of lockdown, and churches reported attracting three times more worshippers online than at previous ‘real-life’ services.

‘Coronavirus has been a traumatic event and it’s made so many people question things in a way they hadn’t before. Seeing maybe their grandfather or a friend die of Covid-19 made people understand their fragility. The superficial things that sometimes blind us were stripped away and made us grapple for something deeper,’ Chris says.

Growing up in Northamptonshire, Chris had no idea of his destiny. His dad is a surgeon, his mum a physiotherapist, while his identical twin Charles, who often appears in videos with him, is a major in the Royal Horse Artillery and trained alongside Prince Harry at Sandhurst. The family were Christians – but not fervent worshippers. Chris followed a ‘middle-class conveyer belt’ of private school and studying business management at Kingston University. ‘I was just a young guy doing what young guys do – chasing girls, doing soft drugs like weed, playing poker.’

On graduating, he found a job working in property. ‘I had a house, a mortgage, a career path where I wore a suit and drove a nice car, but all the time I was thinking, “If this is all life is, it is pretty rubbish.’ So when a friend suggested he travelled to Tanzania to help a mission set up a school and medical centre, Chris jumped at the chance.

‘I quit my job, put my house on the market. In Tanzania, reading the Bible and seeing how people really relied on the land made me understand the connectedness of us all. I fell in love with Jesus. I knew this was what I wanted to spend the rest of my life doing.’

At 24, he was ordained, making him one of the youngest Church of England ministers. ‘I thought my parents would find the decision weird,’ he remembers. ‘I’d always been the troublesome child. But when I called my mum with the news, she said, “You were born on Christmas Day and I went to the hospital chapel and prayed, “God, you’ve given me two sons, so I offer one to your service.” I was like, “What? You committed me to God and never told me!”’

Chris is clear his faith can’t solve problems but it can help us deal with them. In his book, he’s frank about how he and Jenny (whom he met while studying at theological college in Cambridge) have their marital ups and downs when they don’t find enough time for each other. He’s also tearjerkingly honest in his description of their devastation when Jenny miscarried twice. ‘For a while we struggled with that hurt and with our relationship with God,’ Chris says. ‘We still grieve for the loss of what could have been, but we’ve moved on. I wanted people to know we need to be OK with a bit of sadness. If we run from the pain we don’t grow, but if we go through it we become resilient.’

As a Church of England priest, he’s allowed to marry – whereas Fleabag’s ‘hot priest’ is a Catholic who has taken vows of celibacy. Chris watched Fleabag – ‘I had to, everyone said it was a must for me. I really liked the hot priest’s humanity. But there were other things I was disappointed in. I didn’t like the way he and Fleabag ended up sleeping together. She needed someone to look after her and help with her grieving for a friend, she didn’t need someone to sleep with. But, as I’ve said, sex sells.’

Usually when people talk about how fame hasn’t changed them, you’re sceptical, but Chris couldn’t be more genuine. ‘I ask myself constantly: “Why am I doing this? Is it to self-promote?”’ he says. ‘But I don’t point to myself, I point my followers to the good God out there. And my value as a person doesn’t come from Instagram. It comes from my relationship with that God.

‘If there’s more to come from this success, then brilliant. If it doesn’t, I’m still a vicar in West London and I love what I do.’