Commuting key workers have been urged to check their timetables under plans to slash the number of trains to 72 per cent of normal levels during the third lockdown.

Industry body the Rail Delivery Group (RDG) said the drop from 87 per cent reflects the lower number of people travelling and provides better value for money for taxpayers, who are subsiding franchised train operators to keep trains running.

Morning and evening peak services are being prioritised to support key workers.

Some timetables have already been amended, while others will be changed over the coming weeks. 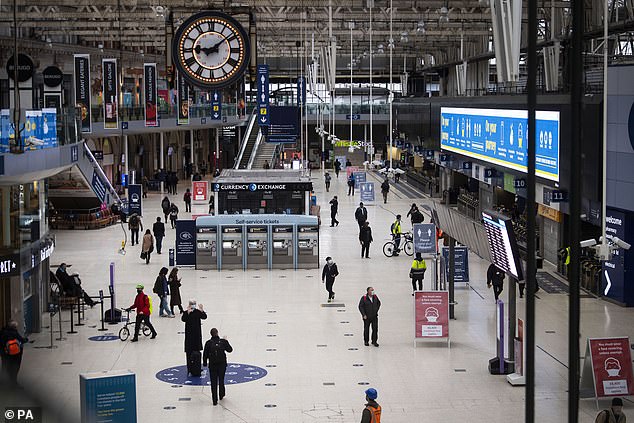 Commuting key workers have been urged to check timetables as the number of trains are slashed to 72% of normal levels (above: commuters in Waterloo Station, London, on Tuesday)

The RDG said alterations are being made in a way that will allow services to be restored ‘as quickly as possible when restrictions are eased’.

Leisure travel is currently prohibited, with people only allowed to leave home for limited reasons.

RDG director of nations and regions Robert Nisbet said: ‘Changing to a reduced timetable during this period of much lower demand will deliver certainty for those people who need to travel while saving taxpayers’ money.

‘We ask people to check before they travel in the weeks ahead and we thank our frontline rail staff whose hard work is keeping other key workers moving.’

Rail minister Chris Heaton-Harris added: ‘It is critical that our railways continue to deliver reliable services for key workers and people who cannot reasonably work from home, and that they respond quickly to changes in demand.

‘The new reduced timetable delivers that, as well as reducing the financial burden on the taxpayer.

‘Levels of services will vary by operator and changes will come into effect steadily over the next few weeks.

‘Passengers who are using the railways, including those who need to travel to vaccination centres, should check their route before they travel, and aim to do so outside of peak times wherever possible.’ 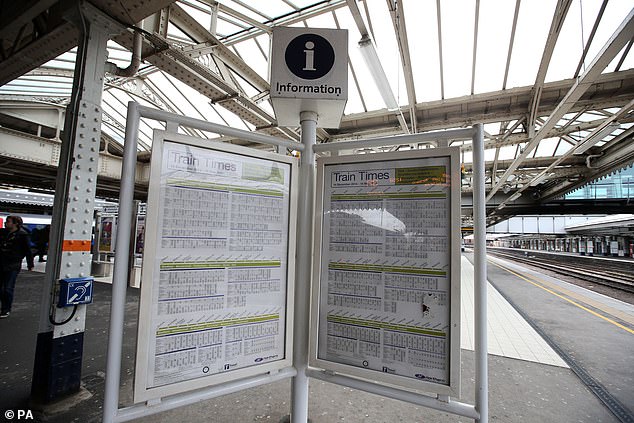 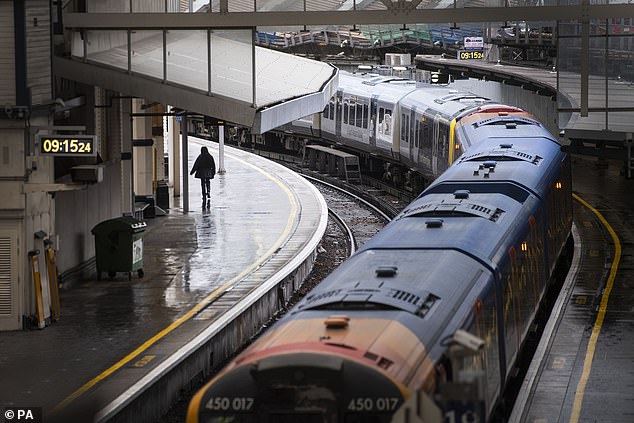 A solitary person on a platform at Waterloo Station during the morning rush hour in London on Tuesday, as England’s third lockdown to curb the spread of coronavirus continues

It follows rush-hour traffic congestion in London reaching its highest level so far during England’s third lockdown on Tuesday morning, as key workers continued to commute into work.

Data from TomTom revealed congestion in the capital hit 28 per cent at 7am, beating Monday’s figure of 25 per cent and every day last week which ranged from 19 to 22 per cent after the lockdown was imposed on January 4.

The level at 8am on Tuesday was 29 per cent, which was also higher than yesterday’s 27 per cent and above every day last week which ranged from 20 to 23 per cent. This also compares to a 2019 average for the time of 67 per cent.

The congestion level represents the extra travel time for drivers on average compared to baseline uncongested conditions – so a 29 per cent level means a 30-minute trip will take nine minutes more than with no traffic.