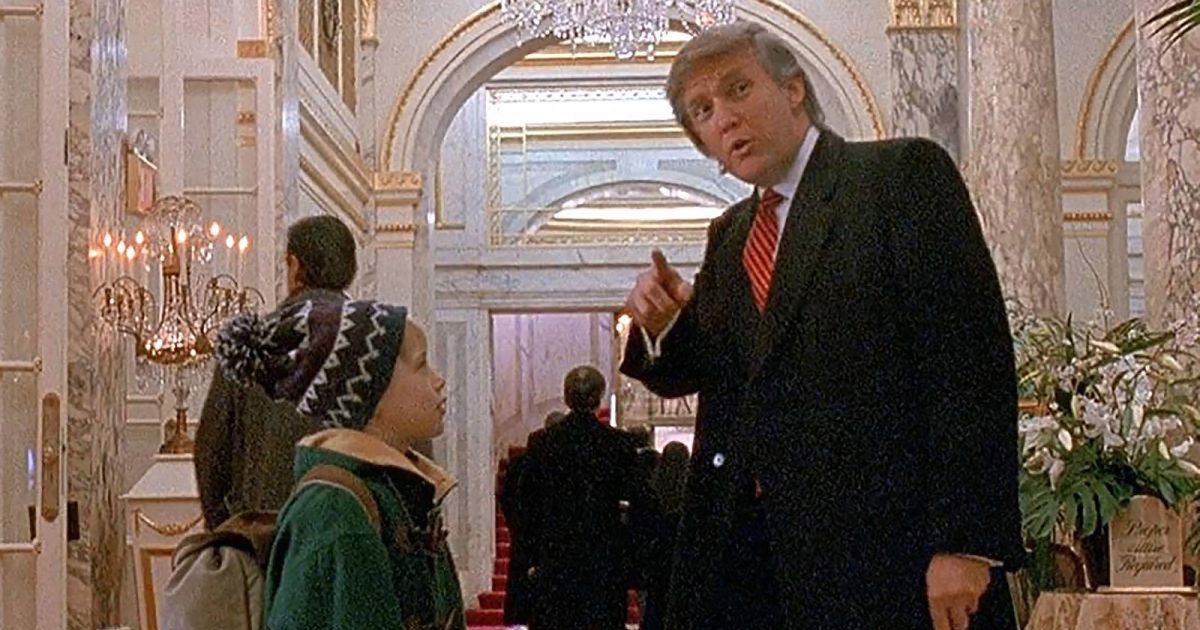 On Wednesday Donald Trump became the first U.S. president to be impeached twice, as the House voted to charge him with inciting last week’s deadly siege on the Capitol.

It’s the latest backlash facing Trump over his false claims of election fraud and inflammatory rhetoric. At least seven major companies have distanced themselves from the outgoing president, who has been banned from Twitter and other social media platforms. The push to de-platform Trump has even extended into the cinematic universe, with movie fans on social media suggesting that Trump’s cameo be scrubbed from the 1992 sequel Home Alone 2: Lost in New York.

One Twitterer even took it upon himself to do some low-grade editing:

It’s not the first time Culkin has knocked Lost in New York for its infamous cameo. During a 2018 Reddit AMA, the actor was asked which Home Alone film he prefers. “The first one was more fun because we didn’t know what we were walking into and it was a lot less flying all over the place; it was all in Chicago,” Culkin replied. “Also it had 100 percent less Trump.”

A Change.org petition has been launched asking Disney to replace Trump with President-elect Joe Biden, but that only has about 100 signatures so far. Some have suggested 40-year-old Culkin (a suggestion Culkin also approved) and Jack from Jack in the Box, among others.

But the most frequently floated substitute has been 91-year-old Oscar winner Christopher Plummer, who famously took over for disgraced actor Kevin Spacey (and earned an Academy Award nomination) in the 2017 drama All the Money in the World.

BREAKING: Christopher Plummer will now tell Kevin where the lobby is in Home Alone 2

The film’s trivia page on the popular user-generated site IMDb was updated to include a widely shared tidbit that “Donald Trump is the only cast member from Home Alone 2: Lost in New York to have been permanently banned from Twitter after encouraging an armed insurrection” before it was ultimately removed.

The meme got an impeachment-based update on Wednesday.

BREAKING: Donald Trump becomes the first cast member of Home Alone 2: Lost in New York to be impeached twice by the House of Representatives. pic.twitter.com/dgHGkhgUhm

Trump briefly appears in the follow-up to the 1990 smash Home Alone, passing young Kevin McAllister (Macaulay Culkin) in the hallway of Manhattan’s glitzy Plaza Hotel when Kevin stops him to ask for directions. The sequel, originally distributed by 20th Century Fox, now falls under the Disney umbrella after the studios’ 2019 merger.

Neither Disney nor Chris Columbus, the director of Home Alone and Home Alone 2, immediately responded to requests for comment.

However, in a recent interview with Yahoo Entertainment, Columbus explained how Trump ended up in the film, saying the businessman-turned-politician who owned The Plaza at the time essentially forced his way into it.

“We got wind back that the only way we could get into The Plaza Hotel was if Donald Trump had a cameo in the movie. I was like, ‘Are you kidding me?’ He said, ‘No, he wants a cameo. He wants a line.’ So we devise this thing cause we needed to shoot in the Plaza. My producers were like, ‘You can cut it. We’ll shoot it. And we’ll cut it later where this is the only way we get in the Plaza.’”

Columbus and company did plan on cutting the scene — but then the studio screened the film for test audiences.

“We previewed the movie for the first time in Chicago. And when that moment came up, it [got] the loudest laughter and cheers. Get this, cheers back in 1992 when they saw him. Weird moment,” the filmmaker said. “That was literally a high point for the audience. I mean, no one had a crystal ball. They couldn’t know what was going to happen today.”

Watch Chris Columbus talk about the making of Home Alone: