Mother, 28, ambushed woman inside train station toilet to demand she hand over her granddaughter 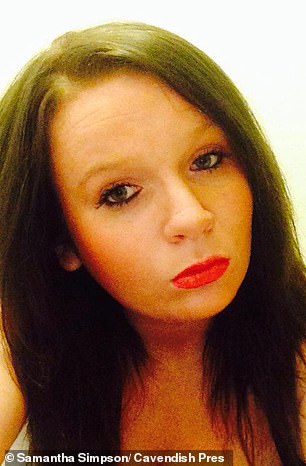 Mother-of-three Samantha Simpson, 28, (pictured) ambushed a woman inside a train station toilet and demanded she hand over her granddaughter after her own children were taken away by social workers

A mother-of-three who ambushed a woman inside a train station toilet and demanded she hand over her granddaughter after her own children were taken away by social workers has avoided jail.

Samantha Simpson, 28, spotted the woman with a seven-year-old girl in Piccadilly Railway Station in Manchester and cornered her in the ladies lavatory.

Simpson shouted ‘I’m taking her’ and ordered the distressed girl to ‘come to mummy’, to which the grandmother – who was moments away from boarding a train to London with the child – replied: ‘You are not taking her.’

Simpson had her own children taken away by social workers after she clocked up a string of convictions for drink and drug related violence.

Her mental health had ‘deteriorated’ in the weeks before the confrontation, a court heard.

Simpson told police – who were called to the scene by terrified staff – that the girl was her daughter.

She also attacked a female officer at the scene, leaving her with a scratch on her chin.

Simpson faced a charge of attempted kidnap but prosecutors accepted her guilty plea to the lesser charge of affray.

She was ordered to complete an 18-month community order plus 20 rehabilitation activity days after insisting she was now getting professional help for her behavioural issues.

The girl and her grandmother – who have not been named – were not hurt in the incident on March 19, 2020.

Minshull Street Crown Court heard that the grandmother had travelled by train to Manchester to collect her granddaughter from relatives.

Mark Brookes prosecuting said: ‘The girl’s grandfather had become unwell and as he was someone who looked after her, the family felt the girl’s grandmother, based in London, should look after her instead.

‘That day the grandmother travelled by train to Manchester Piccadilly station. She arrived on the 12.34pm and planned to return with the girl on the 15.15pm to London.

‘The pair had time to kill so they went shopping in the intervening hours before returning to the train station.

‘There the grandmother took the child into a toilet but at that point, the defendant came into the female cubicle area.

‘While the young child was in the toilet, the defendant approached the grandmother and said, ‘I’m taking her.’ 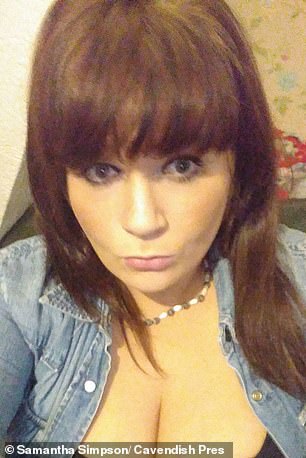 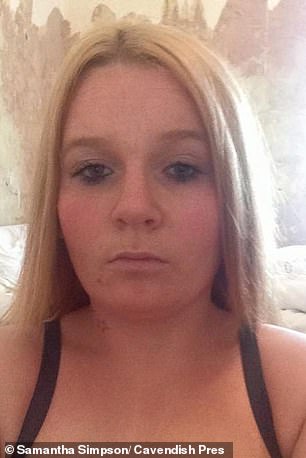 Simpson, 28, (pictured) spotted the woman with a seven-year-old girl in Piccadilly Railway Station in Manchester and cornered her in the ladies lavatory

‘She was then asked to leave by staff at the station staff but outside she waited for the girl to exit the toilet before urging her: “Come to mummy”.’

‘The grandmother replied: “You are not taking her” and the defendant was then intercepted by police who had been called [for] assistance.

‘Initially Simpson refused to believe the officer’s credentials, saying “you’re not the real police” then shouted in the face of one of the officers.

‘But while that took place, the defendant lunged at the officer, leaving a scratch on her chin. The defendant told the officers that the girl was her daughter.’

In 2014 Simpson was convicted of assault after kicking a policeman in the groin after she was found staggering along the street at 3am with two of her young children and a baby in her arms.

During that incident she was so drunk and high on cocaine she could not pronounce her own name and stumbled over hitting her head on a wall.

As police tried to detain her she lashed out and injured three of them.

Simpson was warned her children would be taken into care if she carried on offending but in 2016 she admitted offences of child neglect, carrying a kitchen knife and criminal damage to a door.

She was convicted of assault in 2019.

On the day of the latest incident she had just completed a sentence of supervision.

In mitigation for Simpson – who also pleaded guilty to assault on an emergency worker – defence counsel Miss Rachel Shenton said: ‘Her mental health had been deteriorating.

‘She has also had an extremely troubled and difficult background, aside from her mental health and has spent several months in hospital. 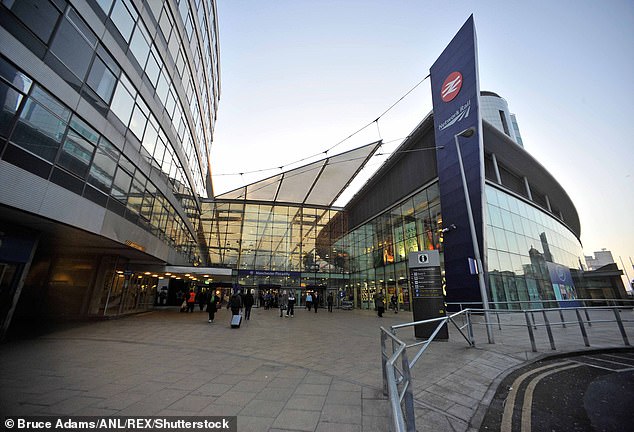 Simpson told police at Piccadilly Station In Manchester (file image, pictured) – who were called to the scene by terrified staff – that the girl was her daughter

‘She’s in sheltered accommodation now and has responded extremely well since the incident.

‘It is the best progress she has made in her history and she has stayed out of trouble. She seems extremely positive about the future.

‘The hope is that she will be able to move from this accommodation to her own. She has some contact with her children, but they have been removed.’

Sentencing Judge Suzanne Goddard QC told Simpson: ‘You have a significant criminal record and what you did that day was concerning.

‘I can’t imagine how frightening it must have been for the child and her grandmother, being faced by this sort of behaviour.

‘It is clear you have some psychological problems but drugs and alcohol are linked to your trouble with the police. I hope that the progress you have made will continue.

‘It seems to me that the public is going to be much better protected if I take the recommendation in the probation report.

‘I am giving you an opportunity today. But in future when drinking casually with friends, just think about me waiting here for you if you get into trouble again.’