The incoming director of the Centers for Disease Control and Prevention has warned that at least one new strain of COVID-19 has shown resistance to antibodies, but assured vaccines are still effective against new variants.

Dr. Rochelle Walensky, who has been nominated by President-elect Joe Biden to be the next head of the CDC, made the comments during a Sunday interview on CBS’ ‘Face the Nation’.

In a more grim prognosis, Walensky said she expects the US to reach a staggering 500,000 virus-related deaths by mid-February and warned of ‘dark weeks ahead’. Currently the nation’s total stands just shy of 396,000.

A number of new strains of coronavirus have arisen over the past few weeks, including in the UK, South Africa, Brazil and even in the US.

Concern has subsequently stirred that current treatments and vaccines may be ineffective in dealing with the new strains, however Walensky said any such fears are currently unfounded.

‘We’ve known for a long time that viruses mutate, not just the coronavirus but any virus,’ she said. ‘So far, the one from the U.K. looks like it is more transmissible.

‘We don’t have any information whether it evades our vaccines,’ Walensky continued. ‘We have indication that it likely does not.’ 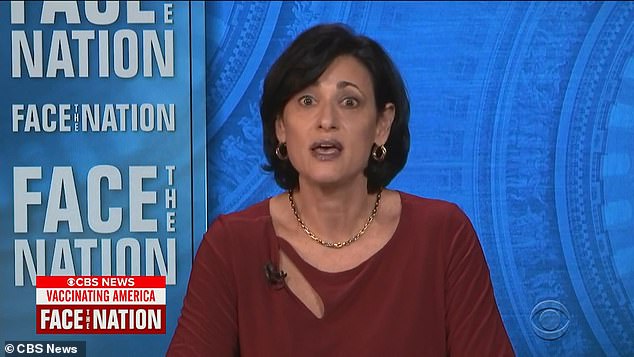 Dr. Rochelle Walensky, who has been nominated by President-elect Joe Biden to be the next head of the CDC, made the comments during a Sunday interview on CBS’ ‘Face the Nation’ 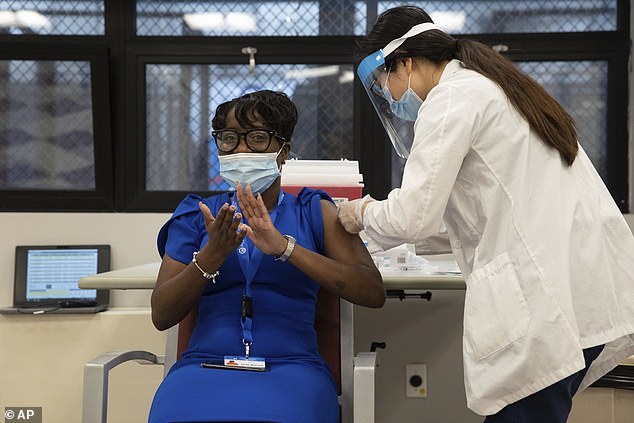 The expert promised that ‘further studies’ are underway to determine the effectiveness of the vaccine on the new strains.

Walensky also spoke in reference to a report which claimed the new South Africa strain of COVID-19 is resistant to anti-body therapies.

The doctor confirmed to Fox that she had ‘heard similar things’ about the antibodies used in treatments like the Regeneron therapy which was used to treat President Trump.

‘I think there is concern about not just the South African and Brazilian strains but that other future strains might have resistance to those antibodies,’ Walensky said. ‘Not taking off all efficacy, but decreasing efficacy.’

Walensky affirmed that she believed the best way to handle any potential issues regarding mutations is to identify them as early as possible. She also called on Biden to ensure the public health systems has the resources needed to be adequately prepared.

The main concern, she said, would be that a lack of investment and preparation for such a development could dramatically delay the re-opening of public schools – one of Biden’s mayor goals for his first few months in office.

The new UK variant of the virus has been found to be far more transmissible than the original strain.

CDC Experts have warned that the ‘super-COVID’ strain could become dominant in the US by March, triggering massive surges in coronavirus cases.

Already, at least 96 people in 16 states have detected cases of the highly contagious B117 variant, according to DailyMail.com tracking. 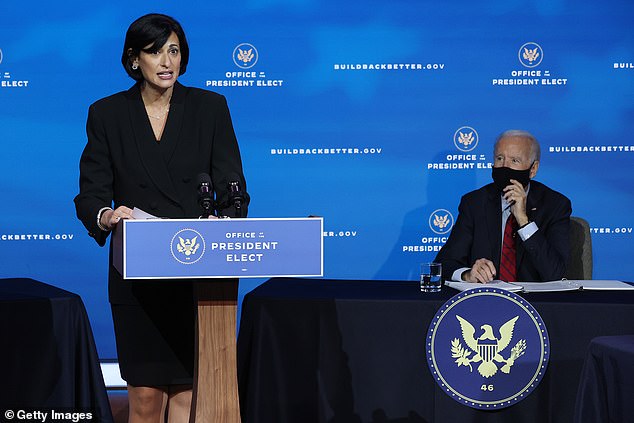 In a more grim prognosis, Walensky said she expects the US to reach a staggering 500,000 virus-related deaths by mid-February and warned of ‘dark weeks ahead 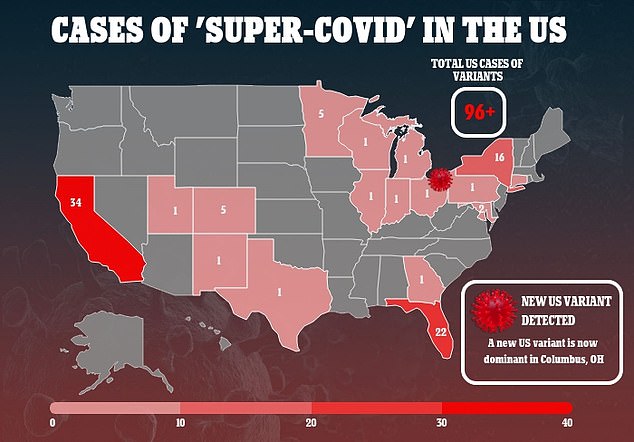 Already, at least 96 people in 16 states have detected cases of the highly contagious B117 variant, according to DailyMail.com tracking 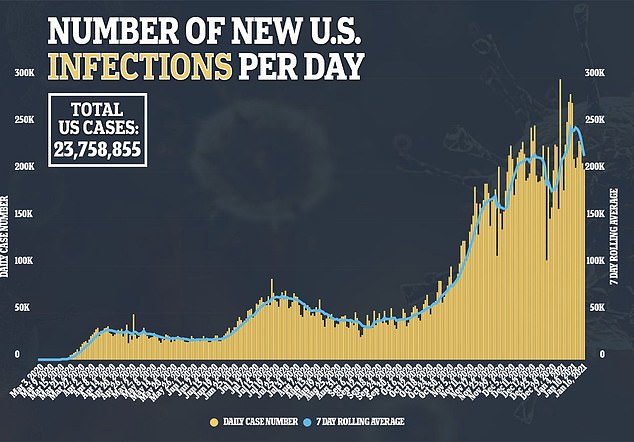 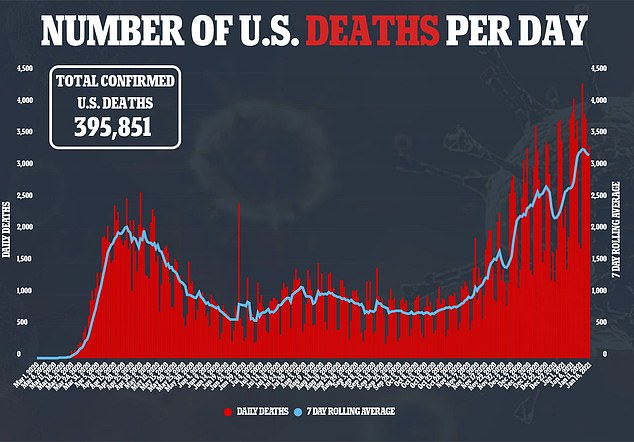 The CDC declined to predict just how many more cases and deaths the variant will lead to in the US.

But it is thought to be up to twice as infectious, and ‘a higher rate of transmission will lead to more cases, increasing the number of persons overall who need clinical care, exacerbating the burden on an already strained health care system, and resulting in more deaths,’ they wrote in a Friday report.

The US also now has three homegrown variants of its own.

All three are suspected to be more infectious than currently more common variants, and one is virtually identical to the UK variant.

Utah and Illinois each reported their first cases of the UK variant on Friday.

California, meanwhile, has emerged as a cluster for the UK variant, with a total of 34 case. Florida also has at least 22 cases of the mutant strain.

Walensky also Sunday offered a grim prediction that the US will reach 500,000 deaths by mid-February.

She noted the nation has reached nearly 4,000 deaths a day and almost 400,000 coronavirus deaths in total.

‘By the middle of February we expect half a million deaths in this country,’ she said.

Walensky emphasized that those numbers do not account for the ‘tens of thousands’ of people who recovered from COVID-19 but have an ‘uncharacterized syndrome.’

She also said the US has not yet seen ‘the ramifications of what happened from the holiday travel,’ which the incoming director said will lead to ‘high rates of hospitalizations and deaths thereafter.’

‘I think we still have some dark weeks ahead,’ she said. 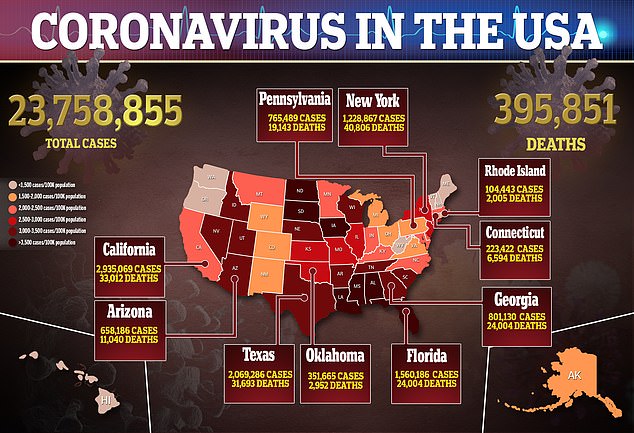