A coffee bar owner has said ghosts in his ‘haunted’ house helped him find a secret vault door hidden inside its walls in a series of ‘spooky coincidences’.

Rupert Ellis bought the home in Camborne, Cornwall, a couple of years ago and was unaware at the time that it was once the head office of the Tehidy Minerals Company.

After talking to a builder who worked on the property in the 1980s and spending around a week tapping the walls, he unearthed a mining vault with a badge reading ‘T Withers and Sons’.

Mr Ellis said he has encountered other strange occurrences at the house, which was built by the famous Basset family around 1832, including flickering lights, banging, mysterious footsteps and eerie posters. 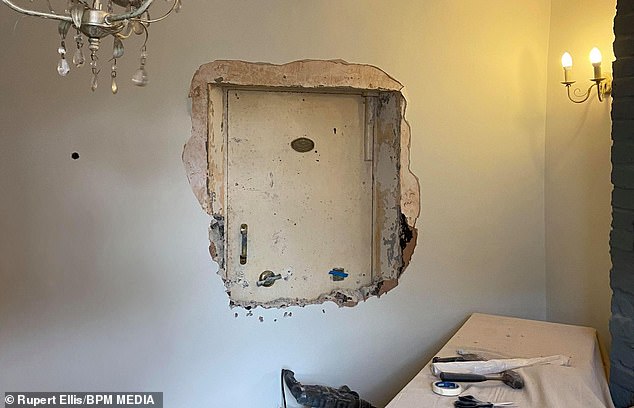 The hidden door to the mining vault, pictured above, at the property in Camborne, Cornwall. Rupert Ellis bought the ‘haunted’ home a couple of years ago 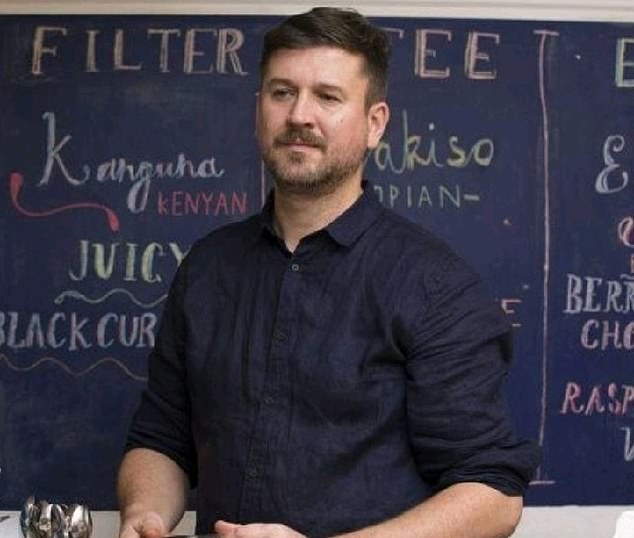 Mr Ellis (pictured above), who owns the coffee bar Espressini in Falmouth, has encountered other strange occurrences at the house, which was built by the Basset family around 1832

Mr Ellis, who owns Espressini in Falmouth, believes he may have been ‘helped’ to discover the vault in an unusual way.

He said: ‘Talking to several local people, who include the great-grandson of the mine captain who lived and worked here, I’ve discovered a wealth of historical information about the house and contents hidden for a generation including a walk-in vault used for storing mine and mineral maps which had been bricked up and plastered over.

‘There’s been this process of taking off layers and getting back to the original. I started chatting to a builder who worked on the house in the 1980s and he said “Have you found the vault yet?” I was like “the what?”

‘I spent a week or so tapping the walls, trying to work out exactly where it would be. It’s a little bit nuts but I do have a suspicion the house is haunted.

‘There have been a lot of coincidences in this house and things that have happened. I get a distinct feeling that I was chosen for this house, rather than me choosing the house.

‘I had an amazing poster framed from an event I held at the shop, and I’ve had it leaning up against the wall in that room. The headline on the poster says “Are you thinking what we’re thinking?”

‘So I did about four little test holes in the wall and then got a jackhammer as I can see there’s something at the back of one of the holes. When I expanded it, the badge of T Withers and Sons on the vault door became visible.

‘It’s so bizarre because the poster was exactly over the position of the door and had been there for about a year and a half.’ 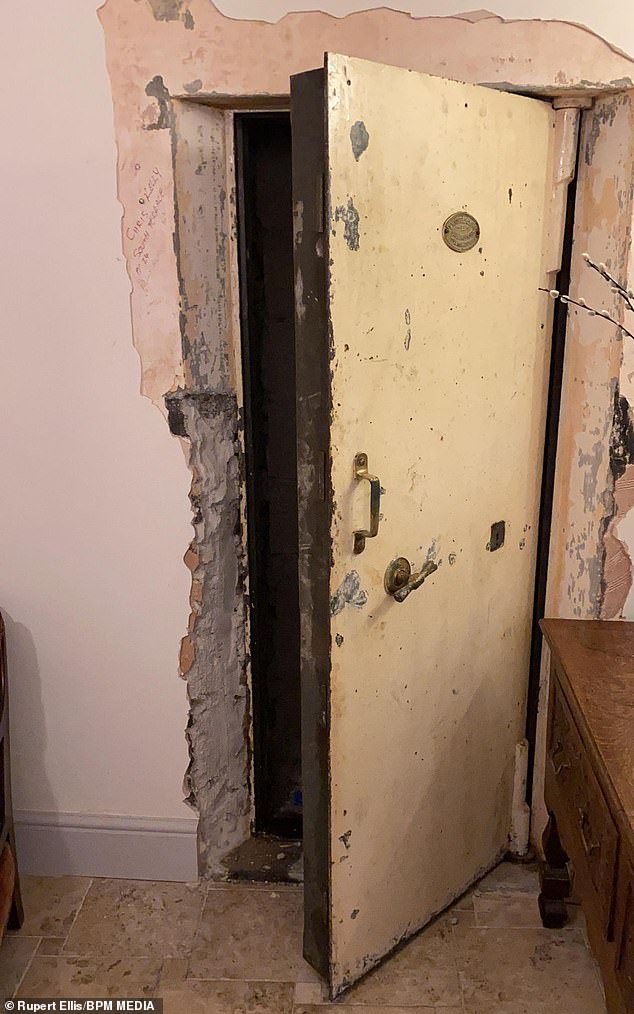 The mining vault door which has been hidden since the 1980s. Mr Ellis believes he may have been ‘helped’ to discover the vault in an unusual way 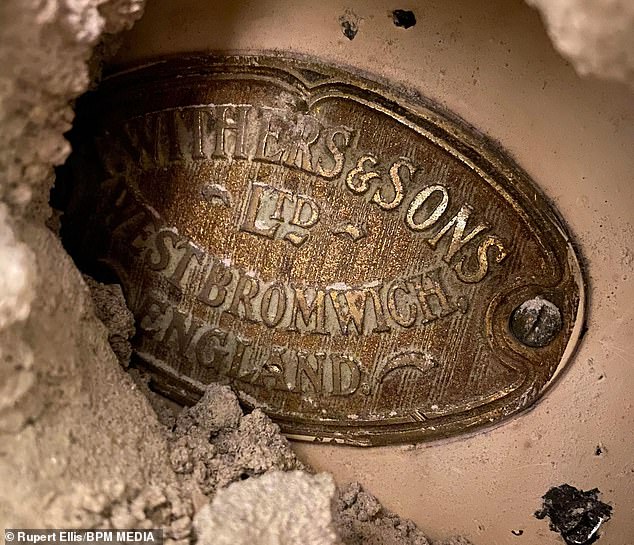 The badge on the vault, which reads ‘T Withers and Sons Ltd, West Bromwich, England’. Mr Ellis has since discovered his paternal great-grandfather was a locksmith from Bilston

Mr Ellis believes that particular room has been trying to get his attention, perhaps to discover the secret vault.

He said: ‘About three or four months ago I had an incident with the lights switching on and off. It’s not the first time that things have happened in the house – there are certain things where I think, I can’t explain that.

‘When I first moved in there was all manner of banging going on. I do get woken up at a certain time each night as well. A friend stayed here who claimed to hear footsteps. There have been some unexplainable scenarios.

‘It’s not something I’m scared of – I feel like I’m joining in with the party.’

Mr Ellis added: ‘I had a tarot reading in that room with a friend who didn’t know anything about the house and she said “your paternal great-grandfather is watching everything you’re doing and is very supportive of all of your movements”.’

It was after this that the vault door emerged with its badge saying T Withers and Son, from Bilston in the Midlands.

‘I thought that sounded really familiar and my mum told me that Jack Willis, my great-grandfather on my father’s side, came from Bilston and he was a locksmith. It was just so bizarre.

‘You can put things down to being coincidental but there are so many coincidences here. So I think I have a responsibility to put the house back in the way it wants to be put back.’

The vault would have originally been a walk-in safe with a strong room at the back, which Mr Ellis believes may still be hidden by plaster. It would have contained mine plans, wages and ore. 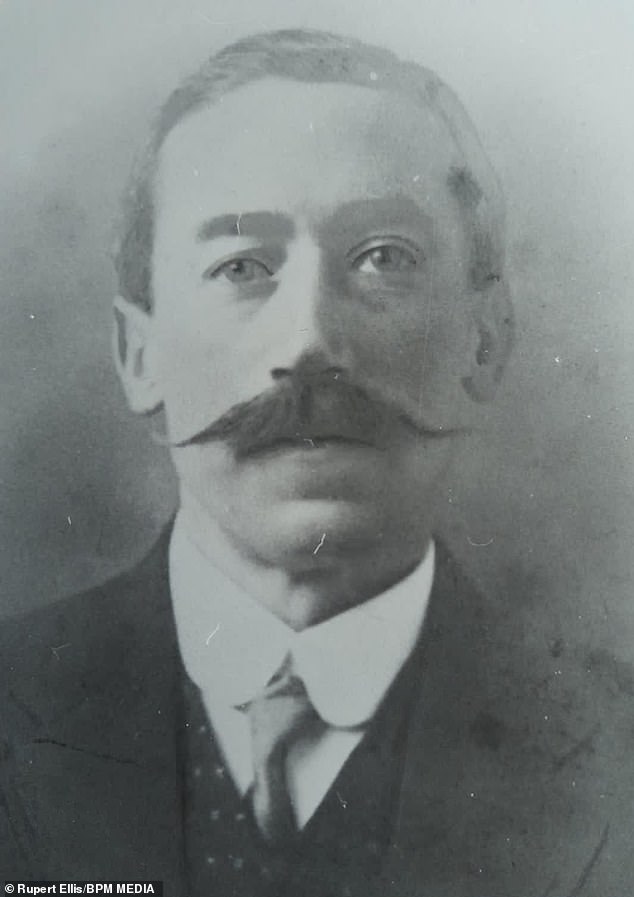 Mr Ellis’ great-grandfather Jack Willis, who provides a ‘spooky’ connection to the home in Camborne. Mr Ellis added: ‘I had a tarot reading in that room with a friend who said “your paternal great-grandfather is watching everything you’re doing”‘

Mr Ellis said: ‘Because of my love of history and a background in archaeology I’m obsessed by the process of putting the features back into the house and discovering hidden treasures.

‘I’m of the firm belief that this house chose me and not the other way round. There have been some very spooky coincidences.’

The infill on the sides of the safe contains big nuggets of turquoise copper, which likely means mine waste was used in the building of the house.

The current bedroom was once the boardroom, seating 20 staff around a large oak table, while the original tiles in the hall were buried under modern laminate flooring.

He added: ‘There’s a delicious irony to the house and the discovery of the vault and its history at a time where the renaissance of mining in Camborne is at a point where it may see its fortunes rise once again.

‘It’s a really interesting point in the history of Camborne – it shows that it’s about to start being put back on the map again.’