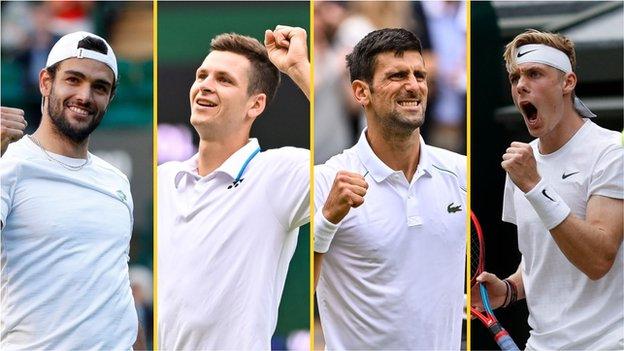 World number one Novak Djokovic says he will “need to be at his best” to beat Denis Shapovalov and reach a third consecutive Wimbledon final.

“I’m sure that that’s going to be the biggest test I will have so far in the tournament,” said Serbia’s Djokovic.

Djokovic is bidding to win his 20th Grand Slam, an achievement that would draw him level with Federer and Rafael Nadal at the top of the all-time list for men’s major singles titles.

He has won the Australian Open and French Open titles already this year, while victory at Wimbledon would be his sixth at SW19.

Djokovic has a 6-0 record over Shapovalov, including a 7-5 7-5 win at the ATP Cup in January, but has never played the world number 12 on grass.

“Shapovalov has been playing really well, he looked impressive against [Andy] Murray,” Djokovic, who cruised past Hungary’s Marton Fucsovics in the quarter-finals, told BBC Sport.

“He’s one of the up and coming stars, the last couple of years we’ve all expected him to make a breakthrough at Slams, he wasn’t really managing to win some big matches but it’s all coming together for him.

“He’s definitely a great quality player, an eye-pleaser for a lot of tennis fans. He has nothing to lose, for sure, in the semi-finals.”

Shapovalov, who at 22 is 12 years Djokovic’s junior, will be playing in his first Grand Slam semi-final, and is only the third Canadian man to reach the last four at Wimbledon.

“When it comes down to the match, you walk out on the court at 0-0, it’s a tennis match and anything can happen. I’m ready for battle and for a chance to win.

“[Djokovic] was telling me that the two wolves are coming at each other.

“He’s definitely a super solid player. He’s got every shot in the book.”

‘It’s going to be tough’ – Berrettini prepares for Hurkacz

Both Berrettini and Hurkacz will be playing in their first semi-finals at the All England Club, while it will mark Poland’s Hurkacz’s first semi-final at a major with his previous best being the third round in London in 2019.

The 14th seed stunned eight-time Wimbledon champion Federer in straight sets in the quarter-finals, having defeated second seed Daniil Medvedev in the previous round.

He is only the second Polish man to reach a Slam semi-final, and beat seventh seed Berrettini in straight sets in their only previous meeting on the ATP Tour on the hard courts of Miami in 2019.

But the big-serving Italian – who hit a 139mph delivery against Felix Auger-Aliassime in the quarter-finals – has pedigree on the grass, winning the Queen’s title in June.

“I think I just need to stay with my game, play aggressive, and do my best to compete as good as I can.”

Berrettini has dropped only two sets on his way to the last four, where he becomes the first Italian man to reach the Wimbledon semis in the Open era.

“Playing Hubert is going to be really tough,” said Berrettini, who has hit 79 aces so far at SW19, compared with Hurkacz’s 48.

“He beat Daniil, beat Roger in a row, and he’s feeling good.

“He’s having a great season so far, so it’s going to be tough one.”

A committee investigating the Jan. 6 Capitol insurrection opened its first hearing Tuesday with a focus on the law enforcement

A committee investigating the Jan. 6 Capitol insurrection opened its first hearing Tuesday with a focus on the law enforcement