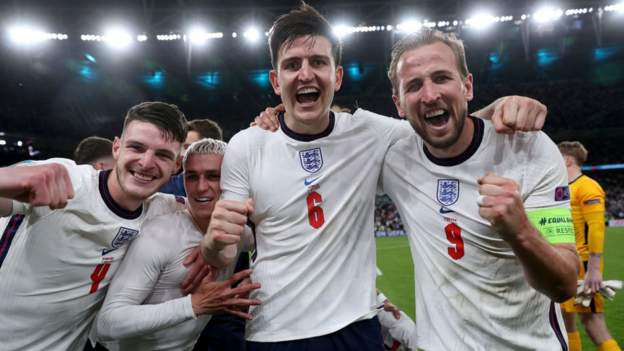 Harry Kane says England have bonded with the public by being “normal lads” who hope to fulfil childhood dreams in “the biggest game of all our careers”.

Captain Kane could lift England’s first trophy in 55 years if they beat Italy to win Euro 2020 at Wembley on Sunday.

“Whenever your name is mentioned in company like that, it gives motivation and confidence,” Kane told BBC Sport.

“You dream of these moments as a kid – lifting trophies for your country. And we have that opportunity now.

“These are the opportunities you have to grab with both hands.”

England’s success in the championship has followed positive headlines featuring a number of the squad’s players.

Striker Marcus Rashford has won praise for assisting a number of good causes, while forward Raheem Sterling will receive an MBE for his services to racial equality in sport.

Midfielder Jordan Henderson helped orchestrate financial support for good causes from Premier League players during the coronavirus pandemic and England’s players have already said they will donate a chunk of their prize money from the Euros to National Health Service.

“We know that the ultimate goal is to finish the job now. But yeah, for sure everyone should be proud of the way they’ve represented themselves and obviously their friends and family across across the country.”

Stones on dreams and Sterling

Central defender John Stones says England have been motivated by scenes of celebration on social media in recent days and – like his captain – is aware of how fans dream of being in the players’ position.

“It’s difficult to put into words,” said Manchester City defender Stones. “We have definitely thrived off the fans.

“I suppose we are living their dream, right at the front , out on the pitch. We can’t thank them enough for all their support through the tough times and the good.

“The support is deeply appreciated by us as players. We are proud to represent them, the country and we hope we do them proud on Sunday.”

Stones moved to praise Gareth Southgate, highlighting the England manager’s “calmness”, a quality he says then “passes through the team”.

He also explained he hopes Sterling can go on to be named player of the tournament.

The Manchester City forward has delivered superb displays and scored three times in England’s passage to the final.

His fine form follows a season during which he opened up about facing racist abuse on social media and where his place in the England starting line-up was questioned.

“I couldn’t be happier for him,” said Stones. “He’s gone through some difficult times personally. You can see it’s motivated him and he’s come out the other end a better player. That’s what top players do, they find something, a way to excel as a person and a player.

“He has done that on and off the pitch. He really deserves it.”

NHS Covid app: Should it stay or should it go?