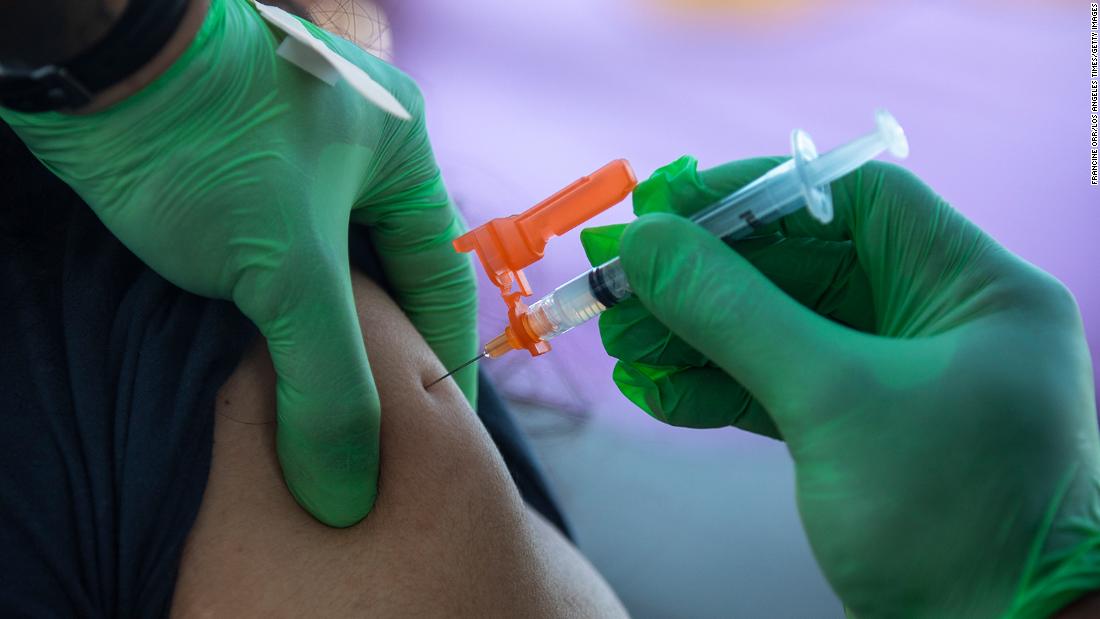 The most populous county in the US is seeing “exponential growth” of Covid-19 cases as the Delta variant takes over as the dominant coronavirus strain, health officials in Los Angeles County said.

While 60% of those over 16 years old have been fully vaccinated, Los Angeles County’s case rate jumped from 1.74 cases to 3.5 cases per 100,000 people in one week, according to a news release from the county Department of Public Health. The overwhelming majority of those testing positive in the county are unvaccinated, representing 99.96% of all new infections, the release said.

The jump mirrors upticks in other parts of the country over the past week, as experts warn of Delta’s high transmissibility.

Those warnings come as some focus turns to the future and what the coming months will look like amid Delta’s rise and continued vaccine hesitancy: Pfizer says it will soon seek emergency use authorization from the US Food and Drug Administration for a booster shot after seeing waning immunity from its vaccine, and the US Centers for Disease Control and Prevention releases updated school guidance, underscoring the importance of in-person learning this fall.

Overall, California’s Covid-19 positivity rate – the percentage of all tests that are positive – has tripled since the state fully reopened last month. The rate now surpasses 2% for the first time since early March, after hitting a low of 0.7% in early June, according to new data from the state’s Department of Public Health.

The Delta variant, first detected in India, has been found in 43% of new sequenced samples in California, the state said.

And it also makes up more than 50% of sequenced samples across the country. In some places, it’s even more, said Dr. Rochelle Walensky, director of the US Centers for Disease Control and Prevention.

“Although we expected the Delta variant to become the dominant strain in the United States, this rapid rise is troubling,” she said.

In parts of the Midwest and upper Mountain states, it accounts for about 80% of cases, CDC data suggests.

See also  Windrush Day 2021: 'I wanted to put my culture out there'

“Widespread vaccination is what will truly turn the corner on this pandemic,” Walensky said. “Please know, if you are not vaccinated, you remain susceptible.”

Pfizer announced Thursday it was seeing waning immunity from its vaccine – manufactured in partnership with BioNTech – and was picking up its efforts to develop a booster shot to offer further protection against variants.

Israel’s health ministry had seen efficacy of Pfizer’s vaccine drop from more than 90% to about 64% as the Delta variant spread, it said in a statement this week.

A Pfizer spokesperson later told CNN the company planned to request FDA emergency use authorization for a booster shot in August.

But hours after the Pfizer statement, the US Food and Drug Administration and the CDC issued a joint statement saying Americans don’t need booster shots yet. Dr. William Schaffner, professor in the Division of Infectious Diseases at Vanderbilt University Medical Center, supported the US government’s stance.

“The answer is that our vaccines still are very, very effective in keeping us out of the hospital, in averting severe disease. That’s what they were designed to do,” he told CNN on Thursday. “Now, it’s a bonus if they can also prevent what we call infection. You can get infected, have mild symptoms or no symptoms at all. They diminish that possibility greatly. But they can’t turn it off completely.”

People who are fully vaccinated against Covid-19 should continue to feel very protected against serious disease, CDC Director Walensky told CNN on Friday.

Cases where vaccinated people get infected but have no symptoms should be seen as “vaccine success,” not failure, Walensky said, because the vaccine is doing what it was developed to do: prevent severe disease and death.

Early studies have also confirmed that most people who develop breakthrough infections do not replicate enough virus in their bodies to become contagious, she said. Even though people might test positive, they are not likely a source of spread of the virus.

See also  Analysis: From 'Friends' to 'Fleabag,' the history of sitcoms is bigger than you think

Former US Surgeon General Dr. Jerome Adams told CNN on Friday he found the apparent “lack of coordination on communication” between vaccine companies and the federal government “troubling.”

But he explained the differing views like this: Vaccine companies are thinking about the future – or as he said, “where the hockey puck is going” – while the government is thinking about the present and trying to convince the vaccine-hesitant to get inoculated.

“We know immunity does tend to wane over time as we go into winter,” he said. “We want to make sure we are in the best possible position to protect vulnerable people in nursing homes,” who were first vaccinated and would be at most risk from waning immunity and the Delta variant.

Meantime, government agencies like the CDC and the FDA want “to reassure Americans your best protection still is a vaccine and you still got great protection – better than for the flu shot in any given year – even in the face of variants and waning immunity.”

“Vaccinations are your best bet right now. They’re still incredibly effective,” Adams said. And if Americans ultimately need a booster shot, “people shouldn’t get too worked up about that,” he said. “We do that for the flu every single year.”

In a statement Friday, Pfizer said, “We regularly discuss our entire research program with regulators and public health authorities in the US and other countries around the world.”

In updated guidance for schools, the CDC on Friday emphasized in-person learning is a priority this fall, regardless of whether all Covid-19 prevention measures are implemented in schools.

But it’s still important to layer safety strategies like masking, physical distancing and, most importantly, vaccinations for everyone who is eligible.

Physical distancing should be practiced in schools where not everyone is vaccinated, the CDC guidance says, but students should not be excluded from in-person learning to maintain that physical distancing.

In line with current guidelines, the CDC recommends unvaccinated people over the age of 2 wear masks indoors. People who are fully vaccinated generally don’t need to wear masks.

The updated guidance also suggests schools take steps to promote vaccination, like offering vaccines on site and providing paid sick leave for employees to get vaccinated, as well as excusing students who are getting vaccinated.

Schools that are ready to transition away from pandemic precautions as community transmission reaches low levels should do so gradually, removing them one at a time while continuing to watch local conditions.

According to CDC data published Friday, 47.8% of the US population is fully vaccinated.

Per the CDC’s data, Alabama remains the only state in which less than a third of residents– 33.2% – are fully vaccinated.

While experts have long stressed vaccines are the best defense against the pandemic, the difference in vaccination rates between Republicans and Democrats has grown over the last two months, a report released Thursday from the Kaiser Family Foundation shows.

The researchers said these numbers get at the importance of targeted vaccination efforts that account for partisan opposition.

“A key component of any effort to boost vaccination rates among Republicans will be identifying the right messengers,” the researchers wrote.

“Republicans are most likely to trust their doctors and employers to provide reliable information on COVID-19 vaccines, while government sources are less trusted.”