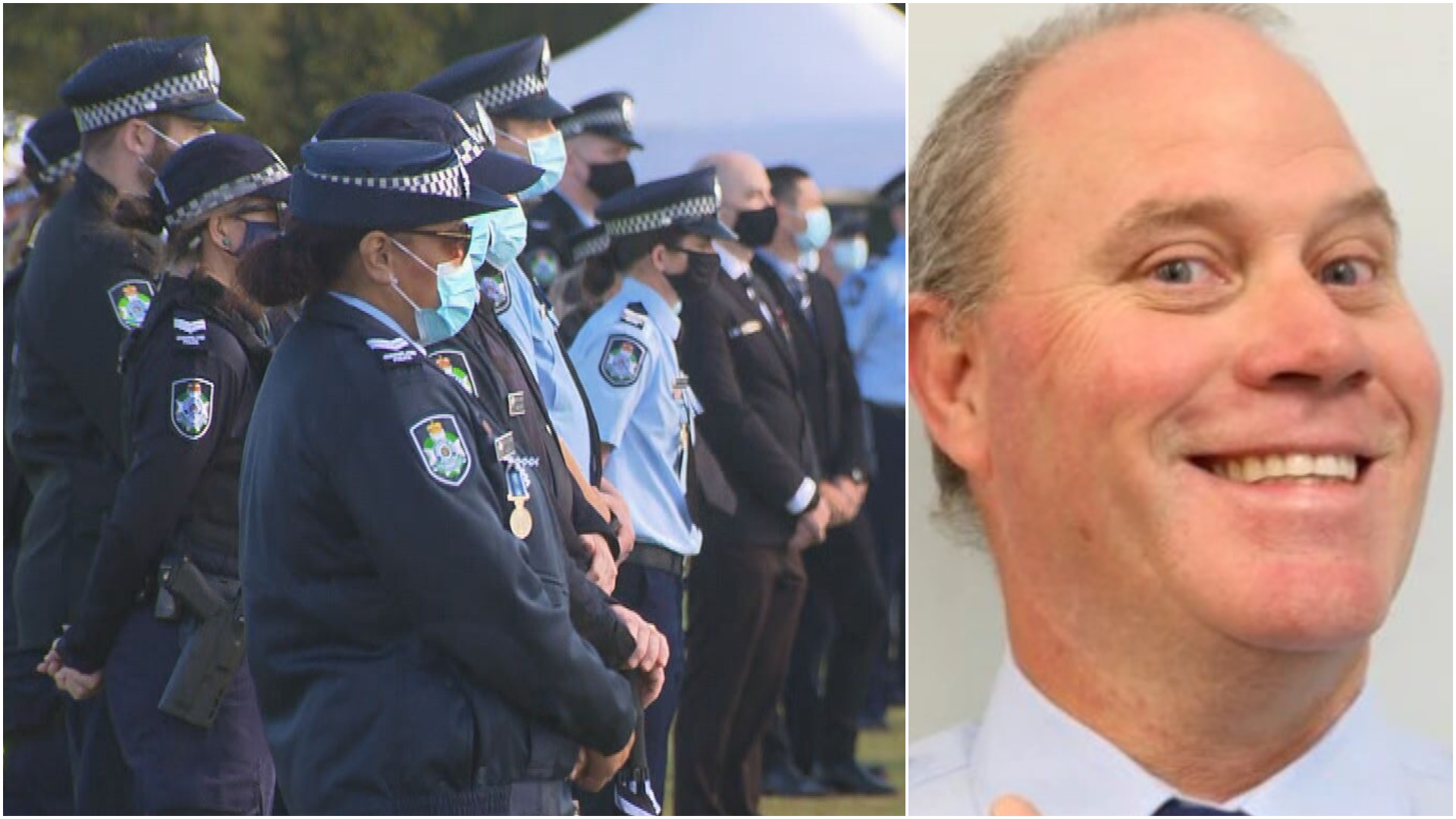 Queensland Police Senior Constable David Masters – ‘Dave’ – who was killed in the line of duty last month, has been honoured and farewelled today with an emotional funeral service and guard of honour.

The 53-year-old was hit and killed by an allegedly stolen car while attempting to lay tyre spikes north of Brisbane in the early hours of the morning of Saturday June 26.

Close family friend Wayne Thompson read the eulogy, speaking of his mate as a “diligent and dedicated police officer”, a loyal husband and friend and a proud father, who loved his community, camping, and horses.

“Dave always had a fierce sense of loyalty to his friends and family,” Mr Thompson said.

“He had a strong set of values.

“He had a great sense of humour, loved a good joke and had a smile which you wouldn’t forget.”

His “resilience and independence” was shaped by his childhood growing up in Margate, in the Moreton Bay region north of Brisbane, Mr Thompson said, playing cricket and rugby league with friends.

“Dave was always very competitive and gave as good as he got.”

Dave met his wife Sharon before becoming a police officer, when she did work experience at Village Motors, where he was working as an apprentice motor mechanic.

He was a “romantic” who once filled her room with roses and would drive her to and from work.

He became “her rock, her protector, her partner in life” and they would go on to have a son, Jack, of whom he was “immensely proud”.’

“He would do anything for his family and they were always the centre of his world,” Mr Thompson said.

An enthusiastic and “meticulous” camper whose “happy place was the great outdoors”, he “loved nothing better than to get away camping with friends and family”.

Dave decided to join the police force after a fated catch-up with a high school friend who was a serving member.

Becoming a police officer and later a member of the QPS Mounted Unit, fulfilled a lifelong ambition for Dave, who had always had an affinity with horses.

The ashes and mane of his horse, Manny, who was put down due to a leg injury, were laid on top of the coffin and will be buried with him.

“Dave loved his blue family and he was well-loved in return,” Mr Thompson said.

“He looked forward to going to work every day.”

Mr Thompson said he first met Dave while volunteering at the Gold Coast’s Indy 600, and over the years the pair cemented a strong friendship.

“At the slightest hint of needing help I didn’t have to look far and you were there,” he said.

“We are all better people for having Dave a part of our lives.”

Addressing the family directly, he said, “Sharon and Jack, my heart breaks when I think of how you both must be feeling.

“Please take strength in knowing there are so many who share your grief and we are all better people for having Dave part of our lives.

“You will take comfort in knowing Dave is riding high in the sky on Manny, patrolling the heavens.”

Queensland Police Commissioner Katarina Carroll spoke of Dave’s time in the service and gave her condolences to the family.

“The Queensland community has been well and truly served by Senior Constable Dave Masters,” she said.

“He is and will continue to be greatly missed.

A photo tribute, accompanied by the Jimmy Barnes anthem ‘Working Class Man’ and ‘One More Day’ by Diamond Rio, inspired more than a few laughs.

Superintendent John Hallam from Moreton District read The Final Inspection, a poem about an officer facing his God at the end of his life.

To begin the service, floral tributes were laid by Sharon and Jack, Governor of Queensland Paul de Jersey, Cameron Dick representing Premier Annastacia Palaszczuk, Comm Carroll, Supt Hallam as well as the officers in charge of the Moreton district including the first responders on the night Dave was killed.

Five hundred of Dave’s colleagues, who would have wanted to be in attendance, instead gathered at the Moreton Bay Lions AFL grounds at Burpengary, standing, socially distanced, in the drizzling rain to watch a broadcast of the service.

Dave’s coffin was accompanied out of the chapel by a commemorative guard of honour.

The motorcade included members of the Mounted Unit, including one horse without a rider, which then proceeded to the AFL grounds, followed by POLAIR, flying at low altitude.

Flags are at half-mast at all Queensland government buildings today, including police stations, as a sign of respect.

Queensland Police Service members across the state held a minute’s silence at stations and workplaces around the state at 12.15pm.

The complex story of Liz Cambage