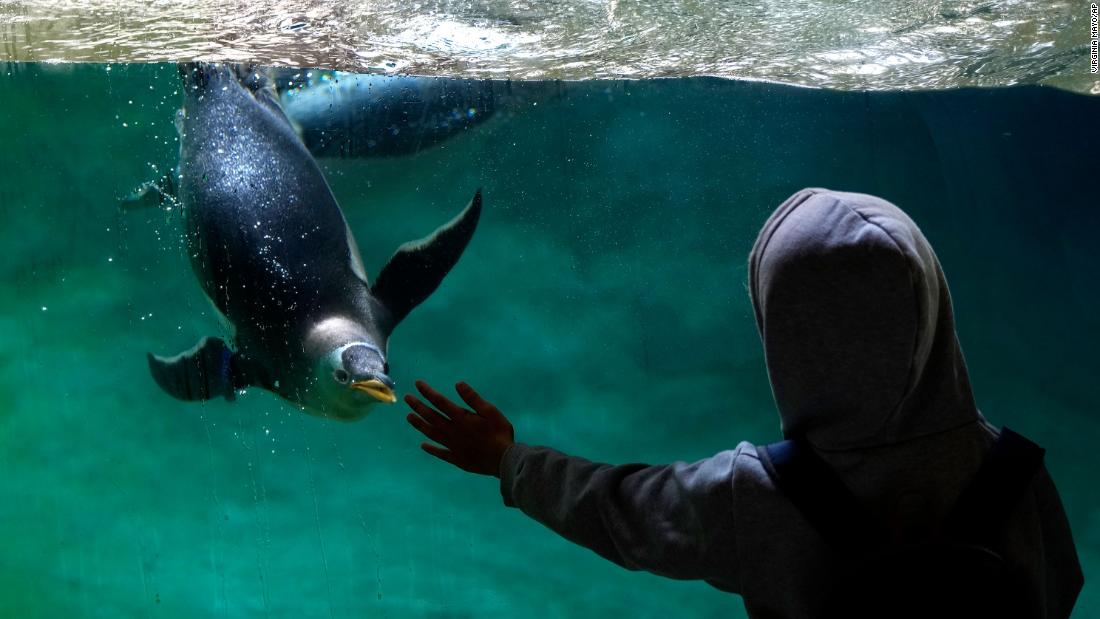 A member of an Israeli search-and-rescue team salutes during a prayer ceremony held in front of the rubble that was once Champlain Towers South on Wednesday, July 7. The 12-story residential building partially collapsed last month in Surfside, Florida, and the rest was demolished on Sunday. Dozens of people have been confirmed dead, and more deaths are expected after the mission transitioned from search and rescue to search and recovery. Jose A Iglesias/Pool/Getty Images
Tropical Storm Elsa makes its way through the Caribbean Sea in this photo taken from the International Space Station on Sunday, July 4. The storm battered some Caribbean islands with heavy rain and high winds before moving into the United States. Megan McArthur/NASA
Confetti falls on Zaila Avant-garde, a 14-year-old from New Orleans, after she won the Scripps National Spelling Bee on Thursday, July 8. She’s the first African American contestant to ever win the event. Joe Skipper/Reuters
England’s Phil Foden, left, celebrates with Harry Kane after Kane scored the match-winning goal against Denmark in the Euro 2020 semifinals on Wednesday, July 7. England won 2-1 in extra time and advanced to play Italy in the tournament final. Laurence Griffiths/Pool/AP
An ambulance carrying the body of Haitian President Jovenel Moise drives past a mural of him in Port-au-Prince, Haiti, on Wednesday, July 7. Moise was assassinated Wednesday during an attack on his private residence. Six suspects are in custody and four have been killed by police, officials said on Thursday. Joseph Odelyn/AP
Nikole Hannah-Jones is interviewed at her home in New York on Tuesday, July 6. The Pulitzer Prize-winning journalist had been chosen as the Knight Chair in Race and Investigative Journalism at the University of North Carolina, the school announced in April. But despite a recommendation by the tenure committee, her tenure was initially denied by the UNC board of trustees. The board changed its decision and offered tenure on June 30 after facing backlash from Black students and faculty who said the board’s initial failure to do so reflected a history of systemic racism at the school. She ended up rejecting the offer, and she will instead teach at Howard University in Washington, DC. John Minchillo/AP
Ambulances line up for a funeral at a cemetery dedicated to Covid-19 victims in Jakarta, Indonesia, on Wednesday, July 7. The country is battling a severe wave of Covid-19 that authorities say is driven by the more infectious Delta variant. Adi Weda/EPA-EFE/Shutterstock

A pickup truck is seen on an Atlanta-area golf course where three men were found fatally shot on Saturday, July 3. Police found the bodies of two men — Paul Pierson and Henry Valdez — in the bed of the truck, which had been driven onto the Pinetree Country Club in Kennesaw, Georgia. The third victim — Gene Siller, the country club’s director of golf — was found shot in the head near the green of the course’s 10th hole. A man was arrested on Thursday and charged with three counts of murder, three counts of aggravated assault and two counts of kidnapping, Cobb County Police Chief Tim Cox said. Ben Hendren

Members of the Tampa Bay Lightning celebrate after they defeated the Montreal Canadiens to win the NHL’s Stanley Cup on Wednesday, July 7. It is the hockey team’s second straight title. Gerry Broome/AP

Pallbearers carry the shared casket of sisters Lucia and Emma Guara before their family’s funeral service in Miami Beach, Florida, on Tuesday, July 6. Lucia, 11, and Emma, 4, are among the youngest victims of last month’s condo collapse in Surfside, Florida. Their bodies of their parents, Marcus Guara and Anaely Rodriguez, were also recovered from the rubble. Lynne Sladky/AP

Migrants bound for Europe rest aboard the Ocean Viking ship on Monday, July 5, after they were rescued in the Mediterranean Sea. Flavio Gasperini/SOS Mediterrane/Handout/Reuters

A half-submerged cargo ship lies in the waters of the Philippines’ Manila Bay after it collided with a dredger on Thursday, July 8. No one was hurt. Aaron Favila/AP

Brooklyn Borough President Eric Adams greets people during a ticket-tape parade held in New York to honor essential workers on Wednesday, July 7. Adams will be the Democratic nominee in New York’s mayoral race, CNN projected on Wednesday after a ranked-choice count of primary voters. Gabriela Bhaskar/The New York Times/Redux
A pet lion that authorities seized from a house in Phnom Penh, Cambodia, poses with a dog after being reunited with his owner on Monday, July 5. Cambodian Prime Minister Hun Sen ordered that the lion be returned to his owner on the condition that his owner made a proper cage for him. Cindy Liu/Reuters
Jessica Ramirez joins a rally on the steps of the Texas Capitol to support voter rights on Thursday, July 8. Texas Republicans were set to mount another push for restrictive new voting laws in their state as lawmakers began a 30-day special legislative session that Gov. Greg Abbott said he wants to see focused in part on “election integrity.” Eric Gay/AP
The Salton Sea is seen from California’s Bombay Beach on Sunday, July 4. Much of the Western United States has been experiencing a historic and unrelenting drought, the worst in the region in at least 20 years. Aude Guerrucci/Reuters
Film director Spike Lee, who is serving as jury president at this year’s Cannes Film Festival, is joined by fellow jury members at the premiere of the film “Annette” on Tuesday, July 6. With Lee, from left, are actress Maggie Gyllenhaal, actress Melanie Laurent and director Jessica Hausner. Lee is the first Black person in history to be jury president at the festival. Brynn Anderson/AP

A man stands in the early morning sun on the dusty streets of Lusaka, Zambia, on Monday, July 5. Tsvangirayi Mukwazhi/AP

Sandra Lindsay, a nurse who was among the first people in the United States to receive a Covid-19 vaccine, waves to spectators in New York as she takes part in a parade honoring essential workers on Wednesday, July 7. John Minchillo/AP

A child reaches out to a Gentoo penguin as it swims at the Pairi Daiza zoo in Brugelette, Belgium, on Monday, July 5. Virginia Mayo/AP

Rescuers check a damaged vehicle at the site of a mudslide in Atami, Japan, on Sunday, July 4. A devastating “tsunami” of mud, triggered by torrential rains, swept through the coastal city. Kyodo News/AP
Michelle Lesco competes in the Nathan’s Hot Dog Eating Contest, which is held in New York on every Fourth of July. She finished ninth overall but was the top-ranked woman, eating nearly 31 hot dogs and buns in 10 minutes. Defending world champion Joey Chestnut broke his own world record, eating 76 hot dogs and buns. Andrew Kelly/Reuters
A member of Afghanistan’s security forces walks at Bagram Air Base on Monday, July 5, after the last American troops departed the compound. Rahmat Gul/AP
The Champlain Towers South building is demolished in Surfside, Florida, on Sunday, July 4. The residential building, which partially collapsed last month, was demolished so that authorities could continue to search safely, officials said. Marco Bello/Reuters

A double rainbow appears in the sky over Wuzhou, China, on Wednesday, July 7. VCG/Getty Images

Tennis legend Roger Federer leaves the court after losing his quarterfinal match at Wimbledon on Wednesday, July 7. Federer, 39, was looking to become the oldest man to reach the Wimbledon semifinals in the Open era. Alberto Pezzali/AP

Migrants board an inflatable raft on the Mexican side of the Rio Grande before crossing into the United States in Roma, Texas, on Wednesday, July 7. Go Nakamura/Reuters

A skydiver floats down to the ground in Caracas, Venezuela, during a military parade marking the country’s Independence Day on Monday, July 5. Ariana Cubillos/AP

A child watches a model of the sun at the Shanghai Astronomy Museum in Shanghai, China, on Monday, July 5. The museum officially opens on July 17. Tang Yanjun/China News Service/Getty Images

People stand in a circle as they take part in the sixth annual Yoga Meeting in the Samalayuca Dunes, on the outskirts of Ciudad Juarez, Mexico, on Saturday, July 3. Christian Chavez/AP

Wuhan virus: Was US money used to fund risky research in China?

How US police training compares with the rest of the world