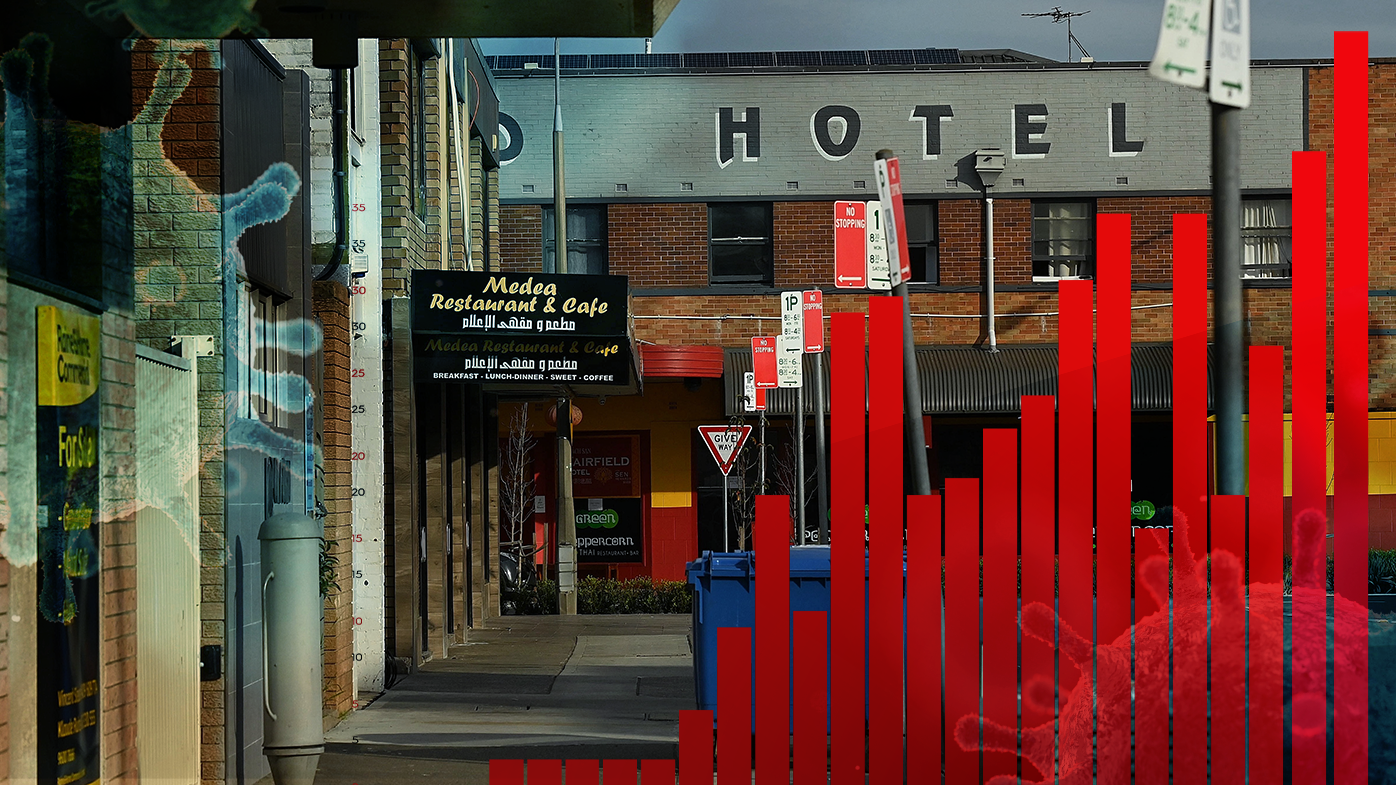 Even more concerningly for health authorities, the majority of those cases have not been in isolation while infectious.

Just 10 were in isolation throughout their infectious period, eight for part of the time and 19 have been out in the community. The isolation status of the remaining seven is still under investigation.

It marks another jump from yesterday’s record figure of 38 new coronavirus cases. At the time, it was the highest daily number in NSW in more than a year.

The figures have prompted a dire warning from Ms Berejiklian, who has told Sydneysiders to brace for even higher daily case numbers in the days ahead.

“The number of people that have been infectious in the community – last night it was 29 and I suspect it will grow tomorrow and the day after,” Ms Berejiklian said.

“It is so transmissible, (so) obviously we’re going to see higher cases moving forward.”

Ms Berejiklian also echoed Prime Minister Scott Morrison’s message this morning that there was no way that NSW could live with the Delta variant in the community, given its current vaccination rate.

“When you only have nine per cent of your community vaccinated, opening up before you get as close to that zero number as possible – it means you would subject thousands and thousands to hospitalisation and death,” she said.

“When we look around the world and we look at countries that are opening up, that are living freely with COVID and the Delta strain, they are able to do that because half of the population is vaccinated.”

Today’s figures have prompted a tightening of stay-at-home orders, with tougher rules now in place around outdoor exercise, essential shopping and funerals.

“Whether you are in a supermarket or anywhere else buying essential items, you have to think about before you leave the home, can I get this online? Do I need to leave the house to go shopping?”

In what the premier has described as a “heartbreaking” decision, from Sunday funerals will be limited to 10 mourners.

Ms Berejiklian again stressed that no one should be visiting others’ households, except for essential care.

“The only exception is if you are receiving care by one person, dropping off essential goods or for health reasons or exceptional circumstances,” she said.

Current arrangements around childcare centres will remain, but the premier said she was unable to say what schools would look like after next week until she saw where the COVID-19 numbers were heading.

“We will get through it together,” he said.

“I know it is tiring, exasperating and frustrating. But we need to keep pushing through.”

The Prime Minister rejected the assertion that Sydney was in lockdown because of the government’s sluggish vaccine rollout.

“It was always known at this time of the year in July of this year that we would still be in the suppression phase,” he said.

“We’ve had breaches here, there have been breaches in other places, and when there are breaches it’s about trying to contain it as quickly as possible.”

Sydney suburbs of most concern

NSW’s Chief Health Officer Kerry Chant today issued a list of the Sydney suburbs of most concern to health authorities, where COVID-19 is circulating amongst the community.

In the city’s south-east, residents in Sutherland, Kareela, Sylvania, Hurstville and Maroubra need to stay particularly vigilant and continue to come forward for testing.

It comes after the local government areas of Fairfield, Canterbury-Bankstown and Liverpool were marked as areas of growing concern earlier in the week, as the outbreak spreads from its origins in Bondi.

Of the state’s 44 new local cases, 21 infections were from south-west Sydney, eight were from the south-east and seven were from western Sydney.

Dr Chant urged Sydneysiders to assume they were coming into contact with someone with COVID-19 every time they left the house.

“Every time you leave your home, you need to assume you are coming into contact with someone who could potentially have COVID,” she said.

There are now 43 people in NSW hospitals being treated for the virus, with six new cases have been admitted in just the past 24 hours.

In a warning for young people, Dr Chant said an increasing number of younger people are being admitted, including seven aged less than 35.

Ten people are being treated in intensive care units, four of whom require ventilation.

‘Dramatic change’ needed for lockdown to end next week

Ms Berejiklian said today that the length of the lockdown will “depend on how the community responds” to restrictions.

The original time frame for the lockdown – which also includes the Blue Mountains, the Central Coast, Shellharbour and Wollongong – was to run for two weeks from 6pm on June 26.

Ms Berejiklian said she needed “everyone to be shocked” by the tightening of restrictions so the tide of climbing COVID-19 cases could turn for the state.

“It is really up to us how long we are in the situation for,” Ms Berejiklian said.

“What I can say is that our target has to be zero or close to zero community transmission before we can live a normal life like we did prior to the lockdown.”

Almost 200 extra police officers have been deployed across the three south-western local government areas of most concern to ensure compliance with the stay-at-home orders.

See also  Agility, toughness and sticking to a plan — how Ash Barty sealed her Wimbledon dream