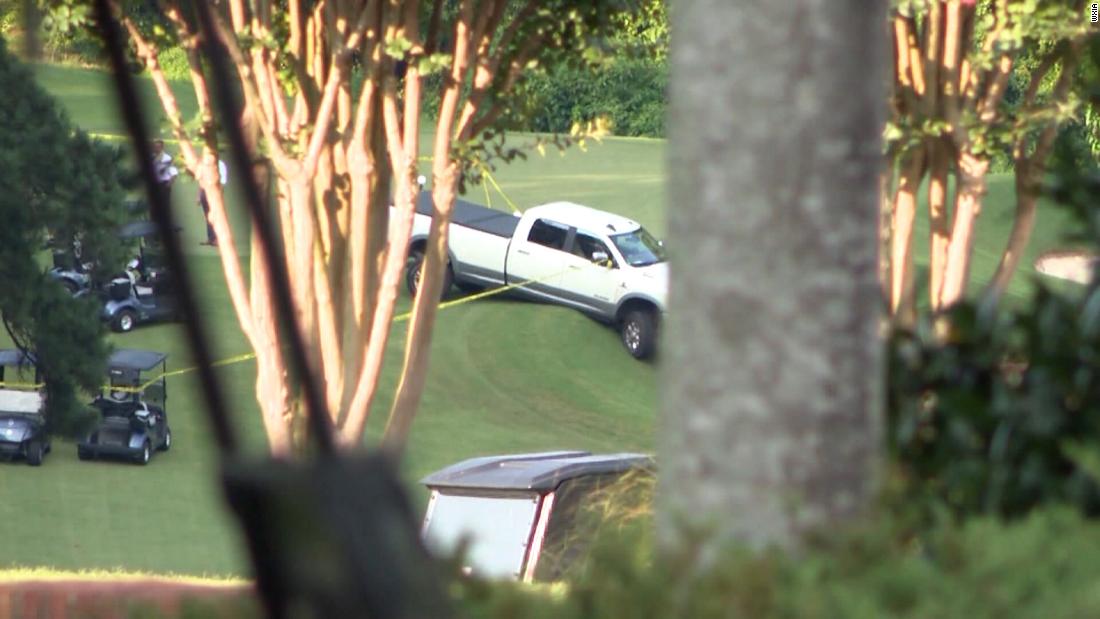 The man arrested and charged in a triple homicide that happened earlier this month allegedly “bound the hands, legs, and mouth” of two men whose bodies were found in the back of a pickup truck, according to a criminal warrant.

Bryan Anthony Rhoden was arrested Thursday afternoon in connection with the killings of the two men, Paul Pierson and Henry Valdez, as well as golf pro Gene Siller, all of whom were found dead last weekend at the Atlanta area’s Pinetree Country Club, Cobb County Police Chief Tim Cox said.

The warrant lists the murder charges against Rhoden for shooting each victim, saying he caused them “visible injuries and internal injuries” that led to their deaths. Additionally, the warrant alleges Rhoden committed three counts of aggravated assault with intent to murder Pierson, Valdez and Siller “by pointing the weapon at said victim and discharging it unlawfully.”

The kidnapping charges accuse Rhoden of abducting Pierson and Valdez by binding their hands, legs and mouths with tape and hiding their bodies in the enclosed bed of a white Dodge Ram pickup truck.

Investigators believe Rhoden, arrested in the Atlanta-area city of Chamblee, was the lone shooter in the killings of Siller, Paul Pierson and Henry Valdez, Cox said.

Police are trying to determine why the shootings happened and whether relationships existed between Rhoden and two of the victims, Cox said.

But investigators feel confident Rhoden, “who has ties to the metro Atlanta area,” had no relationship with the 46-year-old Siller, Cox said.

Police also have said investigators believe that Siller, shot dead on the country club’s golf course, was killed only because he had witnessed a crime in progress involving the shooter and the other two men.

Police have not said precisely what that crime was, but they have said the bodies of Pierson and Valdez were found in the bed of a truck on a golf-course green near where Siller was shot.

On Friday evening, he had an initial appearance before Cobb County Magistrate Judge Donald Hicks. While he did not have any attorneys present, Rhoden told the judge he had obtained legal counsel who had filed all needed paperwork but were “just not here right now.”

Police previously said they were called to a report of a person shot on Saturday afternoon and found Siller – who was the club’s director of golf – shot in the head near the green of the course’s 10th hole.

A truck was on the green, and officers found the bodies of the two other men in the truck’s bed – both of whom also had been shot, police said. One of the slain men was Pierson, 76, of Kansas – the registered owner of the Ram 3500, police said.

Police identified the third victim as Valdez, 46, of California, and said he and Pierson appeared “to have no relation to the location at all.”

Someone had driven to the green in the truck and shot Siller when Siller arrived to see what was going on, a member of the club told CNN affiliate WXIA. The shooter then fled, WXIA reported.

Funeral services will be held Monday

Funeral services for Siller will take place on Monday, according to an email from his golf club, which announced it will also hold a celebration of life Monday evening.

The Georgia State Golf Association expressed its condolences for Siller’s death. “All of us at the GSGA are deeply saddened by the tragic events that occurred earlier today at Pinetree CC. Our thoughts and prayers are with Gene Siller’s family and friends,” the association tweeted on July 3.

Siller, 46, leaves behind a wife and two children, ages 6 and 7, according to the Pinetree Country Club.

He was “a man of compassion” who “loved everybody,” Rand Eberhard, a pastor who lives in a neighborhood near the country club and knew Siller, said earlier this week.

“It’s a big void that is left in our community to lose such an important guy,” Eberhard added.

Rhoden was arrested for DUI shortly after the shooting and later released.

Court records indicate Rhoden was booked on five traffic-related misdemeanor charges some 12 hours after police responded to the shooting on July 3.

Jail records from Dekalb County show Chamblee Police booked Rhoden at 1:54 a.m. on July 4. He was released on July 6.

Police have not said whether Rhoden was considered a suspect in the murders at the time he was released.

Opinion: Biden showed the Black community he gets it

Katty Kay: ‘It’s been a privilege to sit in this chair’

Lauren Maxwell, the 4-year-old daughter of Fetty Wap and his ex, Turquoise Miami, has sadly died. Here’s what we know

Lauren Maxwell, the 4-year-old daughter of Fetty Wap and his ex, Turquoise Miami, has sadly died. Here’s what we know