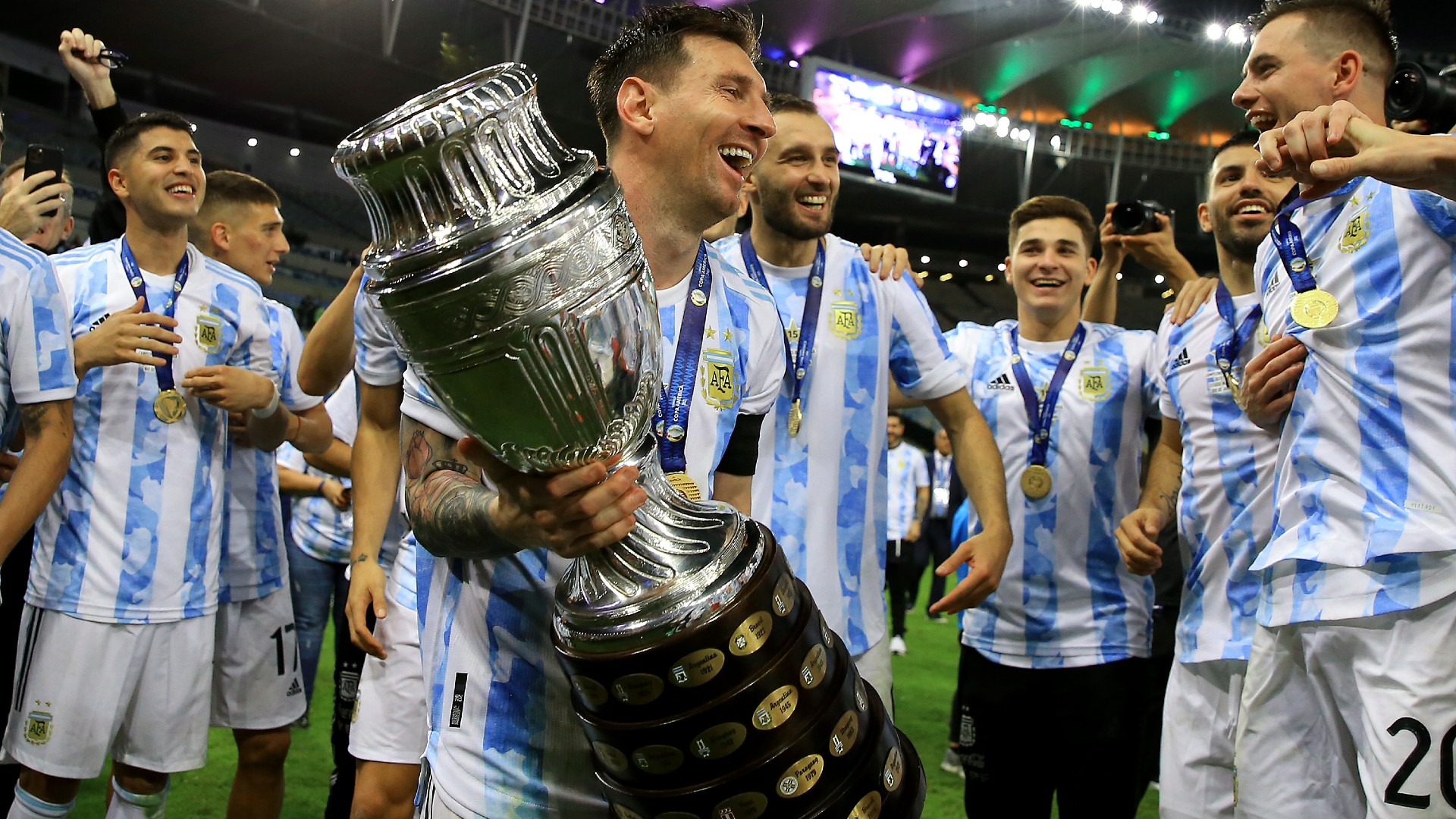 Lionel Messi has finally done it. After so many championship final heartbreaks with Argentina, the 34-year-old Messi won his first major title with his national team after a 1-0 win over archrivals Brazil in the 2021 Copa America final held in Rio de Janeiro.

The Copa America triumph ended a 28-year drought for Argentina, which last one the title in 1993. It also marked the first time Brazil has failed to win a Copa America tournament that it has hosted.

A 22nd minute goal by Angel Di Maria was all that Argentina needed in a chippy final with nine yellow cards. Midfielder Rodrigo De Paul, who was the best player on the field, found Di Maria on the right wing with a long through ball that beat Brazil’s high line. Di Maria controlled it and lofted it over Brazilian goalkeeper Ederson, who came off his line to challenge.

Brazil brought in reinforcements in the second half, but it could never muster a response. Argentina goalkeeper Emiliano Martinez was called into action on two important plays in the second half, parrying shots by Richarilson and Gabriel Jesus. There was also a penalty shout when Gabriel Jesus took a late tumble in the box, but it was a Brazil with too few ideas on the night and it ultimately never found the equalizer.

Messi had a great chance to put his stamp on the match with two minutes remaining, but he uncharacteristically hesitated and slipped in a 1-on-1 with the goalkeeper, allowing Ederson the chance to scoop the ball off his feet. He won’t care. He has his trophy with Argentina and one of the greatest players in the history of the game will never have to hear the questions again.

Brazil vs. Argentina updates and highlights

10:05 pm ET: Messi and Neymar shared a moment before the trophy ceremony.

95th min: Argentina did it! Messi has finally done it! Argentina wins the Copa America for the first time since 1993.

88th min: Messi was 1-on-1 with the goalkeeper and he blew it! He lost his footing and Ederson took advantage and snagged the ball.

87th min: What a save by Argentina’s Emiliano Martinez. Great coordination by Gabigol who volleyed on goal. “Dibu” stopped it.

83rd min:  Brazil’s Danilo with a shot that’s way high after a corner kick didn’t work out for Brazil. The sense of desperation is growing.

79th min: Three subs for Argentina: Pezzella in for fellow center back Romero, who seems to be injured. Exequiel Palacios in for Angel Di Maria and Nico Gonzalez for Lautaro Martinez. Argentina took out its best forwards. It’s about defending the lead with 10 minutes left.

See also  Is UFC 264 do or die for Conor McGregor? Daniel Cormier doesn't think so

78th min: Gabigol (Gabriel Jesus) goes down in the box, but referee says no penalty. Argentina’s Guido Rodriguez was a little too casual in his own box and didn’t see Gabigol coming. Not enough for a PK.

76th min: Two subs for Brazil. Paqueta in fact comes out and Gabriel Jesus “Gabigol” is in. Emerson is also in for Brazil left back Renan Lodi, who was sitting on a yellow.

72nd min: Brazil’s Paqueta proceeds to pick up a yellow. He might be coming out after what’s been a poor game.

71st min: Ball filters into the Argentina box for Lucas Paqueta, but Argentina’s Tagliafico cuts across to defend him expertly. Where’s Firmino at?

70th min: Brazil’s Hernan Lodi is the latest player with a yellow. He took down De Paul near midfield. Brazil don’t have any ideas. Looking good for Argentina.

67th min: Another Argentina midfielder picks up a yellow for a foul on Neymar – this time it’s Rodrigo De Paul, who’s having himself a game.

62nd min: After a dangerous set piece by Argentina, subs are coming in. Argentina left back Nicolas Tagliafico comes in for midfielder Giovani Lo Celso, who was sitting on a yellow (Acuna will move up to midfield). And Brazilian forward Vinicius Jr. also subs in for Everton, who was invisible.

56th min: Neymar goes down in the box (way too easy) and Argentina’s Montiel let’s him have it. The two are jawing. No penalty.

54th min: Richarlison is open on the right side again and he gets a shot off that Argentina GK Emiliano Martinez parries away at the near post.

54th min: SUB – Leandro Paredes, carrying a yellow, is coming out. Guido Rodriguez, who started the Copa America semifinal, is in the game.

51st min: Argentina’s Lo Celso gets a yellow for an ugly foul on Neymar. Now it’s both Lo Celso and Paredes in the referee’s book. It was just Fred with a yellow for Brazil, but he’s out of the game.

46th min: Second half is underway. Liverpool’s Roberto Firmino is in the game for Brazilian midfielder Fred. That leaves Casemiro alone at holding mid to protect the back line.

Halftime: That’s it for the first 45. Argentina will feel great about the way things are shaping up. The Albiceleste have the lead and Brazil hasn’t caused them many issues in the back. Brazil coach Tite is going to have to make some subs. The home team needs a spark.

43rd min: Argentina right back Montiel has to clear the ball away for a corner, first of the match. Neymar’s corner kick was headed and bounced near the penalty spot, but no one could direct it on goal.

37th min: Goal scorer Di Maria is injured on the sidelines. Didn’t look good (ankle twist?), but after some treatment he’s back on and trying to shake it off.

33rd min: Now it’s Argentina’s Leandro Paredes with a yellow for a foul on Neymar, who was running at goal. Free kick for Brazil in range, but Neymar sends it off the wall.

32nd min: Not much has happened since the goal. But Lionel Messi just made a tackle that shows you just how bad he wants this trophy.

18th min: This is how rough the tackles are: Check out what happened to Neymar’s shorts.

13th min: First real threat and it’s Neymar nearly getting a shot off, but Argentina’s Cuti Romero thwarts the chance. The hard challenges are flying and the complaining has begun.

11th min: It’s been stop-start in the opening 10 minutes. Cautious opening by both teams. When Argentina attacks, they’re looking to go down the left side to start.

8th min: Messi has a “get your hands off me” vibe in this photo with his so-called friend:

3rd min: Already a yellow card! Brazil’s Fred gets cautioned for going studs up on Gonzalo Montiel, but it should be a red! No way the ref will show him a red card in the 3rd minute.

1st min: We’re a minute into the game and the Uruguayan referee already has words for Argentina coach Lionel Scaloni! This is going to be good.

7:48 p.m. ET: With only 10 percent of the stadium open to fans, there should be plenty of seats for everyone. It’s not clear what the rush is:

7:42 p.m. ET: Argentina’s record against Brazil when Messi plays is not great:

11 – Lionel Messi has played 11 games against Brazil (W4 D1 L6), one of the defeats in the Copa América 2007 final. Messi has scored five goals against Brazil, his second highest tally against National Teams (alongside with Bolivia and Chile, behind Ecuador’s six). Motivation. pic.twitter.com/N1YoJFA1Ow

7:41 p.m. ET: Argentina in a 4-4-2? It was rumored in the Argentine press, but the official CONMEBOL roster confirms it:

6:50 p.m. ET: Lionel Messi and Argentina are in the house at the Maracana.

The starting lineups are out and while Brazil’s starting XI matches the projections, Argentina coach Lionel Scaloni rang in the changes — five new starters compared to the semifinal lineup:

The 2021 Copa America final between South American giants Brazil and Argentina will be broadcast in the USA in English on FS1 and in Spanish on Univision and TUDN. Those networks are available to stream on fuboTV , which is available on a free 7-day trial . Authenticated subscribers only can stream the match on the Fox Sports app or TUDN.tv

TSN4 will carry the match in Canada and it will be streaming on TSN Direct.