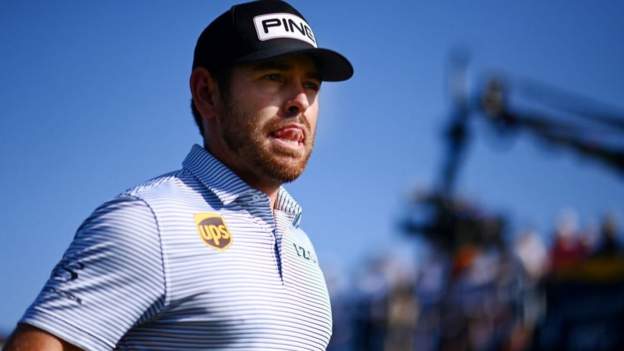 Louis Oosthuizen saw his Open lead cut to one shot heading into the final day at Royal St George’s but he remains in pole position for a second Claret Jug.

The South African, winner in 2010, held a two-stroke advantage after setting a record-breaking pace through 36 holes but it briefly vanished on Saturday.

Americans Jordan Spieth and Collin Morikawa closed in to make it a three-way tie before Oosthuizen birdied 17 and edged ahead at 12 under par.

It sets up a thrilling final day.

Morikawa is the 38-year-old world number 13’s closest challenger at 11 under par after Spieth fell away with a back-to-back bogey finish that dropped him to nine under.

American Scottie Scheffler and Canada’s Corey Conners are four shots off the lead at eight under par.

Scotland’s Robert MacIntyre posted the round of the day, a superb five-under-par 65 that included a birdie-birdie finish as he reached four under for the week.

He is one behind Ireland’s defending champion Shane Lowry and leading English pair Paul Casey and Andy Sullivan, who all sit at five under par.

Low scores were carded when the wind dropped on Friday and organisers responded by setting up tougher pin positions on day three at the Kent links track.

That provided more of a test – with the course again bathed in sunshine and tickled by a light breeze – and challenged the field to hold their nerve around the greens.

World number two Jon Rahm said they “may have been some of the hardest pin positions I have ever seen” after he shot a two-under 68 to move to seven under par.

“You cannot tell on TV but they are almost always on top of a little hill,” added the US Open champion. “It’s a way of defending the golf course.”

And after his round Oosthuizen said: “The R&A put some pins out there that were questionable. It was tough and I’m glad I held it together.”

Oosthuizen showed no signs of nerves on the front nine as he carded seven pars and birdied seven and nine to reach 13 under, despite loud roars up ahead alerting him to the fact 2017 champion Spieth was beginning to make a move.

At the same time 2020 US PGA Championship winner Morikawa was initially trending in the wrong direction, scrambling to save par from a bunker on the opening hole and continuing his jittery start with a bogey after again finding the sand at the second.

The 24-year-old dropped to seven under par, four strokes adrift of Oosthuizen’s lead, with a bogey at five before successive birdies at seven and eight and again on 13 and 14 saw him chisel out a gritty two-under 68 and finish on 11 under.

“I don’t have much experience on links golf and pretty much all the highlights in my head are from this week,” said Morikawa. “Thankfully there are quite a few.

“Hopefully we can just use that momentum from the first three days and bring it into the last 18. It’s going to be a gruelling 18, but I look forward to it.”

Morikawa’s birdie on the par-five 14th moved him into a three-way share of the lead on 11 under after Oosthuizen had bogeyed the par-three 11th and dropped another shot at 13.

The South African, six times a runner-up at major championships since his victory at St Andrews 11 years ago, was beginning to look a little tense himself but saved par on 15 and a wry smile suggested he was back in the grove.

Moments later, a pin-point tee shot at the par-three 16th set the platform for another birdie and Oosthuizen this time edged into a one-shot advantage that he will take into the final day at the Sandwich venue.

“I was definitely not swinging freely,” he said. “I was a little all over the place with iron shots. I felt like I kept the round together at the end there.”

Spieth goes cold at the finish

Spieth’s putter was proving as warm as the late afternoon sunshine when he sank two birdies in his opening four holes and recovered from a bogey at five with two more birdies to take a share of the lead for the first time in the third round.

Even when he found trouble off the tee the three-time major winner was at his scrambling best, making a number of creative shots from the rough and around the edge of the green as he hit the turn in three-under 32 – a start only matched by Cameron Smith among those at the top of the field.

Spieth, who dropped out of the world’s top 50 last year, is looking to end a four-year wait for a major title after last being successful at Royal Birkdale in 2017.

The American, now ranked 23rd in the world, birdied the 10th to reach 12 under par but that was cancelled out on the par-three 11th, though he regained a share of top spot as Oosthuizen stuttered on the back nine.

A string of pars looked to be keeping Spieth in the hunt but he bogeyed the 17th and then missed a two-footer for par on the last to leave himself work to do if he is to end his major drought on Sunday.

With up to 32,000 spectators allowed on site every day, thousands arrived early to follow a couple of big names in the morning groups, Rory McIlroy and Bryson DeChambeau.

Northern Ireland’s McIlroy posted five birdies on the front nine to reach four under but could not maintain that momentum and three bogeys following the turn pegged him back to one under par.

American DeChambeau, who had a spat with his club manufacturer earlier this week after criticising his driver, is well off the pace at three over after a level-par 70.

Woke: Compliment or criticism, it is now fuelling the culture wars

What is redundancy and what are my rights?