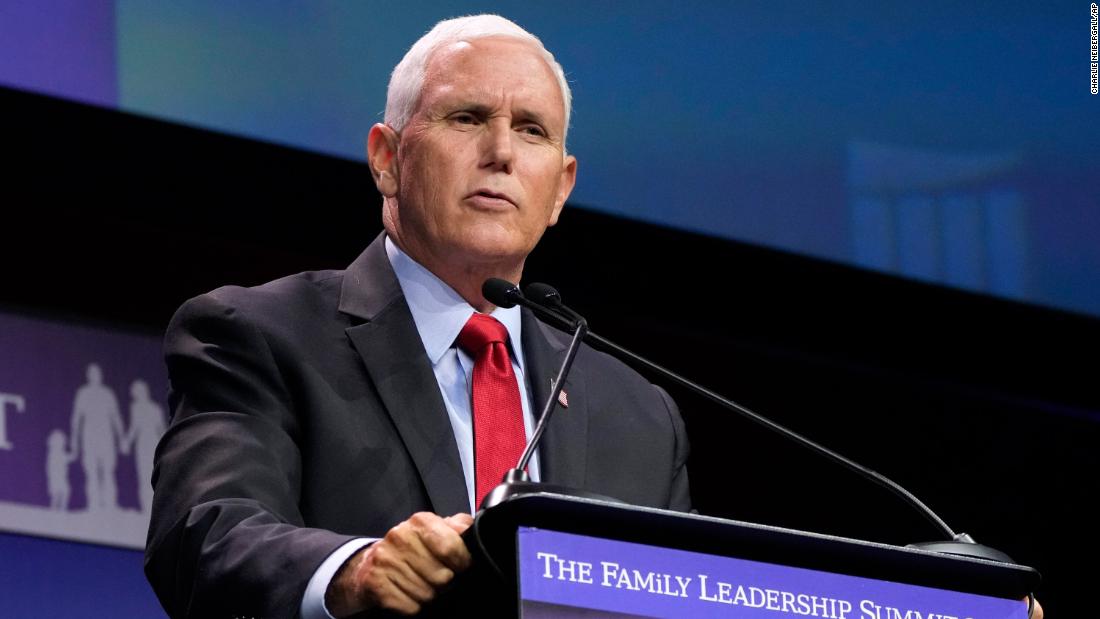 Former Vice President Mike Pence crisscrossed Iowa on Friday, assailing President Joe Biden’s administration for unleashing “a tidal wave of left-wing policies that threaten to wipe out all the progress that we made” in speeches that could preview his potential 2024 message.

The trip to the first presidential nominating state offered a window into how Pence is attempting to craft a political future outside the shadow of former President Donald Trump.

Despite four years of loyalty, Pence has drawn the ire of the GOP’s pro-Trump base over his refusal to heed Trump’s wishes and attempt – without any legal mechanism to do so – to thwart the counting of some states’ electoral votes on January 6.

But in front of friendly audiences, he received warm receptions as he dipped his toes into the early-state campaign waters – flipping burgers in Sioux Center and drawing cheers from a socially conservative crowd that included longtime allies in Des Moines.

Pence insisted that the agenda he and Trump had campaigned on in 2020 is a winning one, pointing to GOP gains in the House. But he largely left Trump out of it, omitting the frequent credits to the former President that had filled his speeches during his four years as vice president. He made no mention of their relationship since departing Washington.

He did, though, include a reference to the January 6 riot that followed Trump’s speech riling up supporters who wanted Pence to throw out some states’ electoral votes – and, after Pence had refused, marched on the Capitol, chanting, “Hang Mike Pence.”

“Truth is, we’ve been through a lot in the last year, a global pandemic, civil unrest, a divisive election, a tragic day in our nation’s capital,” Pence said.

In Des Moines, he criticized Biden and Vice President Kamala Harris, complaining of “the damage they’ve done in such a short period of time.”

“I came here today to say, after 177 days of open borders, higher taxes, runaway spending, defunding the police, abortion on demand, censoring free speech, canceling our most cherished liberties, I’ve had enough. And the time has come … to stand up and fight back against the agenda of the radical left,” Pence said.

The earliest stages of the 2024 Republican presidential primary are unfolding with the party’s biggest question of all – whether Trump will run again – looming large.

Trump recently resumed holding campaign-style rallies that he is using to settle intraparty scores. He has endorsed Republicans in 2022 primaries. And he has teased another presidential run, telling the right-wing propaganda network Newsmax in June that he will be “making an announcement in the not too distant future.”

If he does not run again, though, Republicans would begin with a wide-open field – a prospect that has led the party’s most ambitious figures to begin traveling to early-voting states, making connections with activists, potential staffers and GOP officials, a year and a half before the 2022 midterm elections.

In his speech, Pence accused Biden of overseeing an “explosion in runaway spending,” pointing to budget talks in Washington. He criticized the Biden administration for ending construction of Trump’s border wall. And he accused the administration of replacing “patriotic education” with “indoctrination” focused on race – while offering a misleading explanation of critical race theory.

See also  'I should have done it:' Unvaccinated man who survived COVID encourages others to get the shot

“And it’s far past time to discard the left-wing reflex to find systemic racism in every institution in the country,” he said. “America is not a racist country. America is the most just, noble and inclusive nation ever to exist on the face of the earth.”

Along with Pence, two other potential 2024 contenders were on hand for the Family Leadership Summit: South Dakota Gov. Kristi Noem and former Secretary of State Mike Pompeo.

Both got polite – but subdued – receptions from the crowd of hundreds of social conservatives.

Noem positioned herself as opposed to America under Biden, describing a country that she said “is built on hate and division. On pitting people against each other.”

“It is a shame to watch the violence and the crime and the lack of unity,” she said.

She bragged that South Dakota had not ordered any businesses to close during the coronavirus pandemic. “We didn’t shelter in place. We didn’t mandate anything. We just trusted people,” she said.

South Dakota has the third-most Covid-19 cases per 100,000 people in the nation, with 14,103, according to data from the Johns Hopkins University Center for Systems Science and Engineering. But the state has recently seen just 1 new case per 100,000 people each day.

After watching last year’s protests over racial injustice, Noem said, the state launched a week of advertising attempting to recruit out-of-state law enforcement officers to work in South Dakota, a campaign that she said drew interest from 900 police officers in 41 states. “We’re going to continue to be a state that wraps its arms around our law enforcement officers,” Noem said.

Pompeo touted the role his faith played in foreign policy decision-making during his tenure as Trump’s top diplomat. He said the Biden administration’s unwinding of Trump-era policies “has been tough for me to watch.”

Pompeo argued that Biden has not been tough enough against China and in responding to crime in American cities, and he complained that Democrats have not been sufficiently supportive of police.

He lambasted “the garbage they’re trying to teach in our schools today” – a reference to critical race theory, an increasingly frequent Republican target – and said the United States is not “inherently and systemically racist.”

“We should not challenge our founding. It was noble,” Pompeo said.

He added: “We are not a nation in decline. We are not a racist nation. We are a God-blessed Christian nation. Do not let the woke socialists get you down.”

Biles reveals her aunt unexpectedly died during the Olympics

History curriculum, books were written by and for white people. What about kids of color?

One thought on “Pence says he’s ‘had enough’ of Biden”