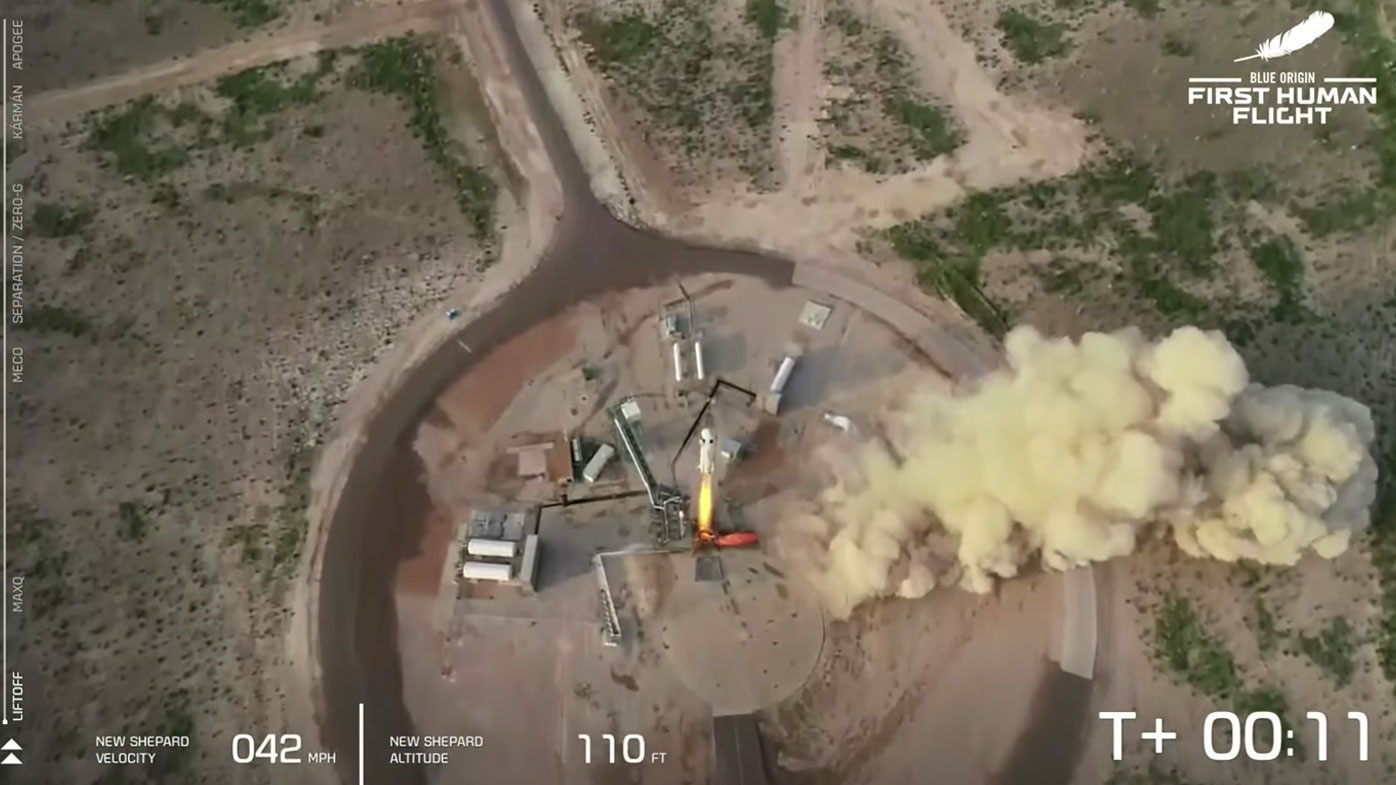 Jeff Bezos, the richest man on the planet, has blasted off for a 3700km/h excursion to space and landed back on Earth safely, in a rocket built by his own company and shared with his brother and the youngest and oldest astronauts ever.

The founder of Blue Origin and Amazon on Tuesday became the second billionaire to ride his own rocket in the space of a little more than a week.

He launched from West Texas with his brother, Mark; an 18-year-old from the Netherlands, Oliver Daemen; and an 82-year-old female aviation pioneer from Texas, Wally Funk — the youngest and oldest to ever hurtle off the planet.

The rocket lifted off just before 11.15pm AEST and reached zero-gravity about five minutes later, to the audible cheers of the four new astronauts on board.

“Best day ever,” Mr Bezos said after the capsule touched down on the desert floor at the end of the 10-minute flight.

Ms Funk, who burst out of the capsule with a smile almost as wide as her outstretched arms, clearly didn’t want the trip she’d been waiting decades for to end.

“That was only about 5 minutes,” she was heard shouting on the way down.

She was one of 13 female pilots who went through the same tests as NASA’s all-male astronaut corps in the early 1960s but never made it into space because they were women.

Joining them on the ultimate joyride was the company’s first paying customer, Oliver Daemen, a last-minute fill-in for the mystery winner of a $28 million auction who opted for a later flight.

The Dutch teen’s father took part in the auction, and agreed on a lower undisclosed price last week when Blue Origin offered his son the vacated seat.

“Oliver, status terrific,” the youngest astronaut ever said during the flight when asked for a status check hundreds of kilometres above the Earth.

Mr Bezos was heard shouting “happy, happy, happy” shortly after, saying “we’re so grateful to everybody who made this possible”, after the capsule returned safely to Earth.

University of Chicago space historian Jordan Bimm said the passenger makeup was truly remarkable. Imagine if the head of NASA decided he wanted to launch in 1961 instead of Alan Shepard on the first US spaceflight, he said in an email.

“That would have been unthinkable!” Dr Bimm said.

“It shows just how much the idea of who and what space is for has changed in the last 60 years.”

Mr Bezos, dressed in a blue flight suit and cowboy hat, had earlier ridden to the launch pad with his fellow passengers. He waved to the cheering crowd gathered along the road and raised a clenched right fist.

The recycled rocket and capsule that carried up Tuesday’s passengers were used on the last two space demos, according to company officials.

Blue Origin — founded by Mr Bezos in 2000 in Kent, Washington, near Amazon’s Seattle headquarters — has yet to open ticket sales to the public or reveal the price.

Virgin Galactic already has more than 600 reservations at $250,000 apiece. Founded by Mr Branson in 2004, the company has sent crew into space four times and plans two more test flights from New Mexico before launching customers next year.

Blue Origin’s approach was slower and more deliberate. After 15 successful unoccupied test flights to space since 2015, Mr Bezos finally declared it was time to put people on board.

Most of the $28 million from the auction has been distributed to space advocacy and education groups, with the rest benefiting Blue Origin’s Club for the Future, its own education effort.

Fewer than 600 people have reached the edge of space or beyond. Until Tuesday, the youngest was 25-year-old Soviet cosmonaut Gherman Titov and the oldest at 77 was Mercury-turned-shuttle astronaut John Glenn.

Both astronaut billionaires want to drastically increase those overall numbers, as does SpaceX’s Elon Musk, who’s skipping brief space hops and sending his private clients straight to orbit for tens of millions of dollars apiece, with the first flight coming up in September.

Tuesday was the 52nd anniversary of the Apollo 11 moon landing, a date chosen by Mr Bezos for its historical significance.

He held fast to it, even as Mr Branson pushed up his own flight from New Mexico in the race for space tourist dollars and beat him to space by nine days.

Despite appearances, Mr Bezos and Mr Branson insist they weren’t trying to outdo each other by strapping in themselves.

Mr Bezos noted this week that only one person can lay claim to being first in space: Soviet cosmonaut Yuri Gagarin, who rocketed into orbit on April 12, 1961.

The chief executive of Amnesty International UK, Sacha Deshmukh, said: “The plight of Nanzanin Zaghari-Ratcliffe, Anoosheh Ashoori and other UK

CNN —   Whether you’re using it for data transfer or charging a phone, tablet or laptop, a USB-C cable

Stone may roll onto Cumberland Lodge

CNN —   Whether you’re using it for data transfer or charging a phone, tablet or laptop, a USB-C cable

Stone may roll onto Cumberland Lodge