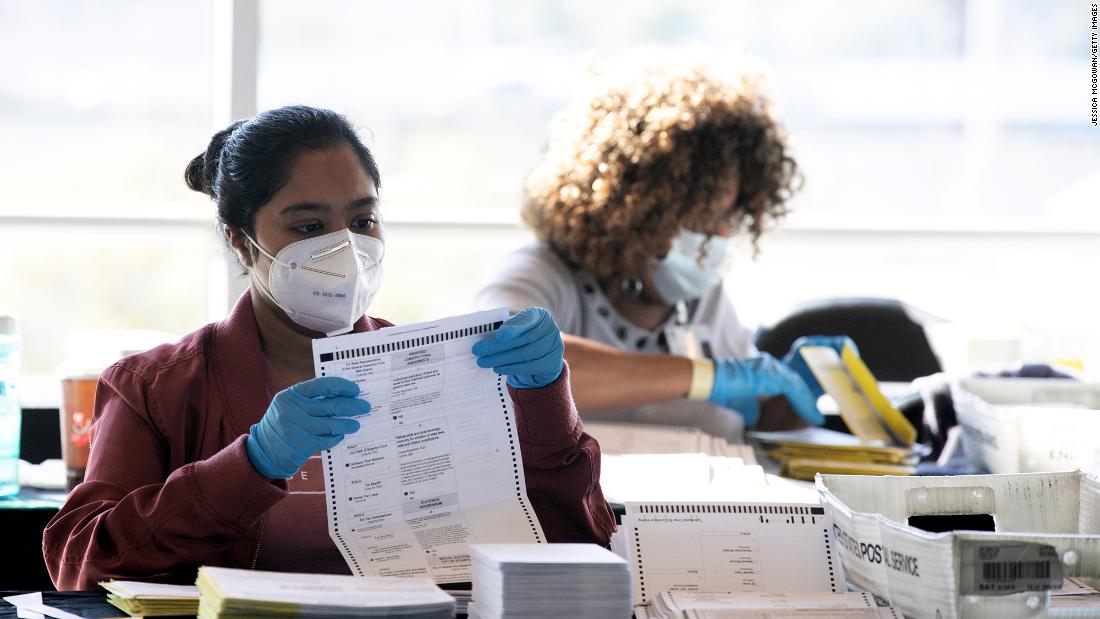 Republican lawmakers in Georgia are requesting that the state undertake a performance review of local election officials in Fulton County – a move that could result in a GOP takeover of election operations in a heavily Democratic region of this battleground state.

A letter sent Friday to the State Board of Elections and signed by Georgia Speaker Pro Tempore Jan Jones and four other Republican members of the Georgia House said the review is needed “to assure voter confidence in our elections and help to rectify elections process deficiencies in a county representing 10% of the state’s population.”

A group of Republican senators from the county sent their own letter seeking a review earlier this week, as first reported by the Atlanta Journal Constitution.

The ability of state lawmakers to trigger a performance review of local election officials is embedded in a controversial new voting law in Georgia. The law also empowers the State Election Board to replace a county’s election board after conducting a performance review or an investigation and to install a temporary administrator with wide authority to oversee election administration and vote counting.

This week’s moves by Republicans in the Georgia General Assembly set off alarms for voting rights advocates, who have pointed to the state takeover provisions as the most dangerous parts of Georgia’s new law, known as SB202.

Fulton County’s Chairman Robb Pitts, a Democrat, vowed to fight what he called the “first official step” in a “hostile takeover” of the county’s elections.

“We are exploring every legal option that is on the table and I am hopeful that we will prevail against these attacks that look more like political theater than good governing,” he said in a statement.

A source familiar with the conversations tells CNN that Pitts discussed legal options with attorneys this week, but his office declined to reveal any details about a potential strategy at this point.

Former President Donald Trump and his allies have targeted Fulton County amid false claims that President Joe Biden won the state because of election fraud. Biden’s win – the first for a Democrat in Georgia in nearly three decades – was certified last December after three counts of ballots, and judges have tossed out several lawsuits claiming fraud.

Election operations in the county, which includes swaths of Atlanta, have been under intense scrutiny for years. Officials oversaw a June 2020 primary plagued by long voting lines and complaints that voters had failed to receive their absentee ballots by mail. Subsequent elections, including the January 2021 Senate runoff elections, however, appeared to operate more smoothly.

Carter Jones, a nonpartisan monitor assigned by the state to review Fulton County’s operations, told the state elections board earlier this year that he uncovered signs of “systemic disorganization” in the election office. But he said he found no evidence of “illegality, fraud or intentional malfeasance.”

In an email to CNN, Fulton County election director Richard Barron ticked off the measures he said his office undertook to make voting easier in 2020 – including accepting grant money to improve operations, widely distributing drop boxes and deploying mobile voting buses to reach more voters during the pandemic. The new Georgia law prohibits or restricts those activities in future elections.

Republican legislators want to “repeat falsehoods over and over to make people believe that they are true ahead of the 2022 primary and general elections,” Barron said. “Our strategy for 2021-22 is to improve in areas where legitimate opportunities are apparent to ensure that voters in Fulton are served well.”

In Friday’s letter, Jones and other members of the Georgia House who asked for the performance review said they recognized it “may later become the basis for removal of one of more of the local elections officials by the State Elections Board, but believe this is a critically important step.”

State Senate President Pro Tempore Butch Miller, a Republican who signed on to the Senate letter calling for a review, said “no one doubts Fulton County has had systemic problems.”

“We believe that the incompetence of election officials leads to long lines and voters not getting absentee ballots on time,” he said in a statement. “That’s what suppresses votes.”

This week’s letters are the first of many steps under the new election law, and final action could be months away. The State Election Board has 30 days to appoint a three-person independent review board.

The action in Georgia comes as Democrats in Congress seek a way to revive stalled federal legislation that would set a baseline for voting rules across the country. Several Democratic senators also have introduced a standalone bill that would limit the ability of state election boards to remove local election officials – a provision that could make it into a pared-down election overhaul a handful of Senate Democrats are negotiating this week.

But any effort to alter election laws faces long odds in an evenly divided US Senate, unless Democrats who support the chamber’s 60-vote threshold for advancing legislation agree to a rule change.

Tropical Storm Sam swirls to life in a frenetic season, expected to be a hurricane by Friday

Tropical Storm Sam swirls to life in a frenetic season, expected to be a hurricane by Friday