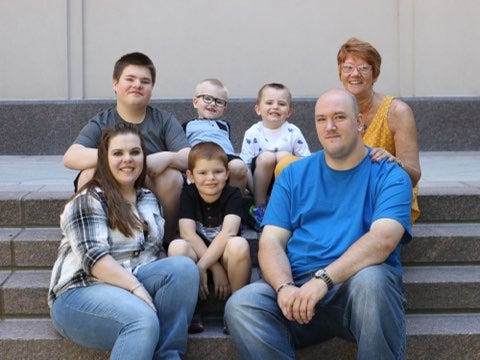 Jessica DuPreez and her fiancé of nearly three years, Micheal Freedy, wanted to give it a year before they rolled up their sleeves for a COVID-19 vaccine. But time wasn’t on their side.

DuPreez and Freedy were together for over seven years and met as co-workers at Potawatomi Hotel & Casino in Milwaukee, Wisconsin. DuPreez loved how Freedy “could always just light up a room when he walked in.”

“His presence was always just so positive and so larger-than-life,” DuPreez told USA TODAY. “He was just awesome to be around.”

DuPreez and Freedy thought they were being cautious by waiting to get their shots. DuPreez never considered herself an anti-vaxxer.

She said the newness of the COVID-19 vaccine and the speed that it had been produced gave her and Freedy pause.

“I do believe in vaccines; I do believe wholeheartedly in this one,” DuPreez said. “We just wanted to wait like one year to see what everybody’s reactions were.”

While DuPreez and Freedy put off getting vaccinated, the couple pursued their travel plans.

About three weeks ago, DuPreez and Freedy, along with their five kids, left their Las Vegas, Nevada, home for a two-day trip to San Diego, California: a small getaway from the desert heat. DuPreez said it was an amazing time, especially for their children.

“None of our kids had ever been to the ocean, so they were loving that and they got to ride the rides at Belmont Park,” DuPreez said.

Freedy returned home with a “brutal” sunburn, purplish red in color with water blisters, and a number of symptoms: lack of appetite, restlessness, feverishness, dizziness and nausea. He stayed home from work the next two days: he couldn’t eat, couldn’t sleep and was “hot to the touch.” But DuPreez said there was little concern because they chalked up these symptoms to Freedy’s sunburn, as they thought he had come down with a case of sun poisoning.

DuPreez said Freedy went to the ER three days following their return from San Diego as his symptoms persisted. She said not much was made of Freedy’s condition at the time; the doctor who saw him just told him to drink some Gatorade. Freedy went to work that night.

However, DuPreez said Freedy continued feeling unwell and called in sick the next two days. Freedy visited a different ER at the beginning of the following week, where a different conclusion was reached about his condition – Freedy tested positive for COVID-19.

DuPreez said Freedy’s young age – he had just turned 39 a couple days before his COVID-19 diagnosis – and relatively good health offered her some reassurance at the time, which she tried to channel into encouragement. “I promise we’ll get through this,” she told Freedy.

Freedy went back home, advised by doctors to stay hydrated with Pedialyte, rest and self-isolate.

But his condition rapidly worsened. He woke up DuPreez around 3 a.m. the following morning, according to DuPreez’s account of Freedy’s illness on GoFundMe, telling her he couldn’t breathe or stand up straight.

DuPreez took Freedy to the ER for his third visit in 96 hours. His blood oxygen level was low, and hospital staff were “surprised he was even able to walk and talk.” Scans of Freedy found pneumonia in both of his lungs, DuPreez said.

It was a rapid decline DuPreez never saw coming.

Although DuPreez wasn’t able to see Freedy after this point, other than bringing him clothes and other items to the hospital, she said she still felt hopeful, even as an anxiety began to settle in.

DuPreez said Freedy was transferred to another hospital and then an intermediate care unit to better meet his care needs. During one of their text conversations, Freedy expressed regret.

“I should have gotten the damn vaccine,” Freedy wrote, according to a report from FOX5, a Las Vegas affiliate of Fox News.

After five days in the intermediate care unit and a week after his COVID-19 diagnosis, DuPreez said Freedy was taken to the ICU. She said he was fully intubated and sedated within about two hours of his arrival.

DuPreez said she was told by a nurse that night “to contact next of kin and to take all of his belongings home.”

DuPreez got up early the day her fiancé died. She said she was planning on going to work that day and had to drop her kids off at her sister’s place across town. But she wanted to visit Freedy at the hospital first.

‘We’re not here to place blame’:WH responds to Ala. Gov. wanting to blame unvaccinated

“I want to make sure he knows that I’m here,” DuPreez said.

When she arrived at the hospital, she thought there was good news. Freedy was in a new bed and some of his numbers had improved.

But soon his blood oxygen numbers plummeted. DuPreez said a nurse reassured her that this was normal.

Then Freedy’s numbers “bottomed out” and he no longer had a detectable pulse.

A “swarm of doctors and nurses” rushed in. DuPreez was promptly moved to the back of the room, as the doctors performed chest compressions on him.

See also  The delta variant is 'ripping through the unvaccinated' and crowding hospitals in Florida, Texas

After 30 minutes of compressions, DuPreez said one of the doctors came over to her and told her they had to stop – “we’ve done everything that we can.”

Brant Graves, one of Freedy’s best friends, normally works late and gets his sleep during the daytime. That day he woke up “to a million text messages and missed phone calls,” all sharing a tone of sorrow: “Oh, that’s so sad” and “Oh, I’m so sorry.”

Graves said at first he couldn’t believe the news of Freedy’s passing.

“It was just very hard to realize that one of my best friends is just gone, and I’m never gonna see him again,” Graves said.

Graves is “fully versed” in dealing with the harrowing realities of COVID-19. He is a registered sleep technologist and spent three months “working side by side with nurses every single day on the frontline dealing with COVID patients and seeing them die left and right and seeing all the tragedy.”

He said he didn’t know Freedy was unvaccinated and that the only time they spoke of COVID-19 was in the in the context of working with pandemic restrictions, such as wearing face masks.

“It’s just a shame that he didn’t get it [the vaccine],” Graves said.

DuPreez said she and her oldest child were vaccinated the same day Freedy tested positive for COVID-19.

Looking back on her own experience, DuPreez said vaccine-hesitant people should push through their skepticism and get vaccinated.

“I would just implore everybody to get it [the vaccine] if they can,” Graves said. “If they’ve been thinking about getting it – get it.”

Some papers cover the Queen’s hospital stay in their late editions, while others focus on Covid. See also  Here’s a

Hawks’ Trae Young: ‘We don’t get the respect we deserve’

Hawks’ Trae Young: ‘We don’t get the respect we deserve’