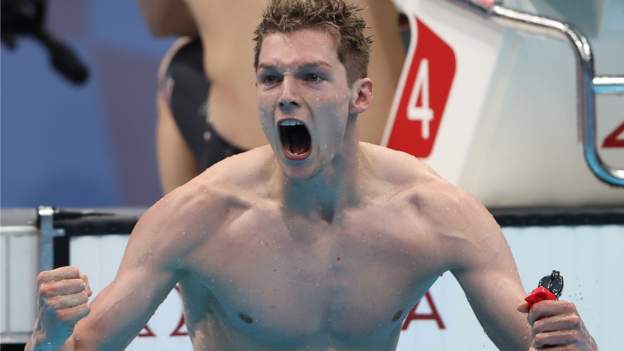 Duncan Scott says he arrived in Tokyo targeting four gold medals. He leaves with one, but also the momentous distinction of having made Olympics history for Great Britain.

At just 24, the Scottish swimmer is the first British athlete to win four medals at a single Games.

His Tokyo haul was completed in the men’s 4x100m medley relay on Sunday, adding a third silver after also finishing runner-up in the 200m freestyle and 200m medley. His sole gold came in the 4x100m medley.

Scott has blocked out all distractions – even family members – to focus his tunnel vision on performing at his peak.

“It doesn’t quite feel real yet,” he told BBC Scotland. “It’s been quick between each swim and every time I’ve just parked it and moved on to the next one.

“I’ve had great support from back home but not replied to anyone, even my parents. I like to stay in the bubble of the competitive environment.”

With two silvers from Rio 2016, Scott’s six Olympic medals is a total bettered only by cyclists Chris Hoy and Jason Kenny (both seven) and Bradley Wiggins (eight).

While Scott’s medals feat in Tokyo sets him apart, he says he fell short of his own sky-high expectations.

Individual gold eluded him by slender margins. In the race he entered as favourite – the 200m freestyle – team-mate Tom Dean won by just 0.04 seconds.

“I thought four golds was a possibility – that’s what I wanted to achieve,” Scott added. “That’s at the very top of what would be great, but to fall short with a gold and three silvers, I’m still delighted.

“I’ve got a lot of team-mates to thank, being part of some awesome relays, getting close to a world record in the 4×200 and it took a world record to beat us in the 4×100 medley.”

Scott’s place in the record books is now assured. And, from a Scottish perspective, he is a sporting legend alongside Hoy, five-time Olympic rowing medallist Katherine Grainger, and three-time Grand Slam tennis champion Andy Murray.

Not that you’ll find the 24-year-old bracketing himself in such exalted company.

“It’s nice to hear but personally I wouldn’t put my name alongside those figures, because of the longevity in their sports,” he added.

What next for swimming superstar?

With the next Olympics taking place in Paris in 2024, the chance to become Britain’s most decorated Olympian is a tantalising prospect for Scott.

Before then, there’s a packed schedule looming next summer with three showpiece events – including the Commonwealth Games in Birmingham – in three months starting mid-May.

For now, though, Scott’s priority is rest for the mind and body.

“Physically you can recover quite quickly but mental fatigue is different,” he said. “It will take a few weeks to just relax because it’s been a long 12-18 months.

“Worlds, Commonwealth Games and Europeans all in one year, I don’t know how that is possible.

“I’ll sit down with the support staff at University of Stirling and set my targets for the next cycle, to see what I want to try and do.”

See also  Plymouth shooting: 'Why did he have a gun licence in the first place?'

Drugs: The county lines gang in our Powys cul-de-sac

Social care: ‘It’s too late for my mum, her house has been sold’

Boris Johnson, who is in New York for a UN General Assembly meeting, told reporters: “We’ve got to try and

3 reasons it’s not too late to refinance your mortgage

CNN —   If you’re a homeowner who’s been considering a mortgage refinance, you might feel like your best chance

3 reasons it’s not too late to refinance your mortgage

CNN —   If you’re a homeowner who’s been considering a mortgage refinance, you might feel like your best chance