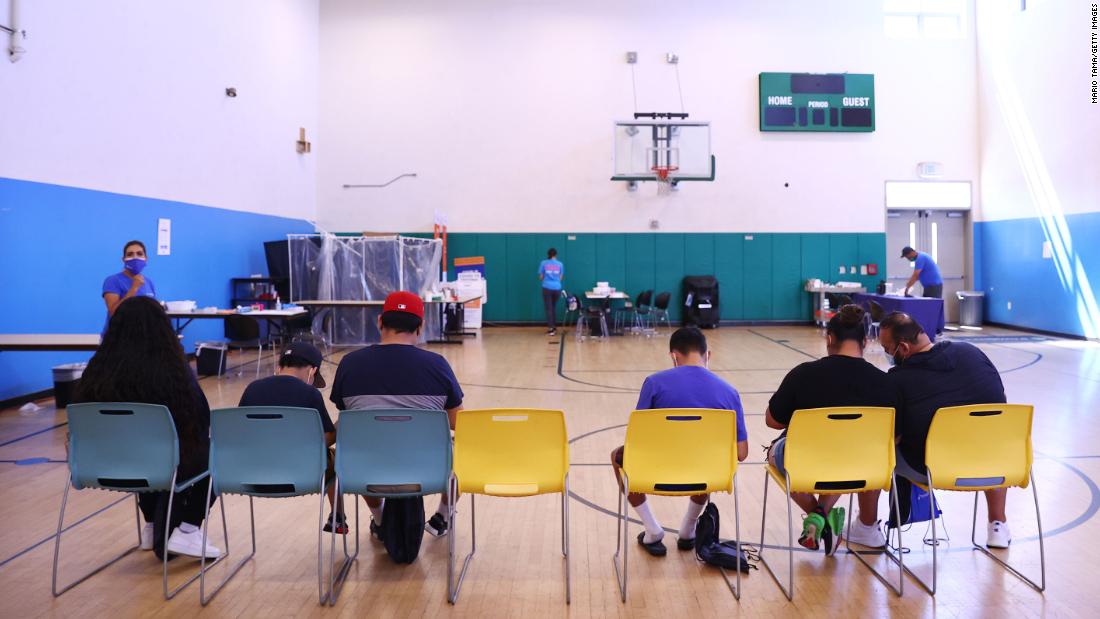 To avoid lockdowns, people in the United States will have to do things that they won’t necessarily want to do, such as wearing masks at indoor gatherings even if they’re vaccinated and having kids mask up in schools, the director of the National Institutes of Health said Monday.

“We want to avoid lockdowns at all costs, but that means we’re going to have to do some other things that won’t necessarily be welcomed by people,” Dr. Francis Collins said on ABC’s “Good Morning America” when asked how he saw the fall playing out.

Those unwelcome things include vaccinated people wearing masks at indoor parties, Collins said, citing an outbreak in Massachusetts in which many of the infected people were fully vaccinated.

Also, children may need to wear masks in schools so that they’re protected from being a source of spreading, something he acknowledged is “not popular with kids or parents.”

“But if we want to avoid more severe outcome that might lead to more extreme measures like lockdowns, we know what to do, we just need to do it,” Collins said. “And oh my goodness, it will be so good if we can have that conversation about the data and the evidence and the public health arguments and get politics out of it. Unfortunately, that’s not where we are at the present time in the United States of America.”

A “silver lining” of the surge in Covid-19 cases caused by the Delta variant is that more Americans appear to be at the tipping point of understanding the importance of Covid-19 vaccinations, Collins said Sunday on CNN.

“People are waking up to this,” he said. “That’s what desperately needs to happen if we are going to get this Delta variant put back in its place, because right now it is having a pretty big party in the middle of the country.”

And according to Jeff Zients, the White House coronavirus response coordinator, vaccination rates have more than doubled in the states with the highest case rates.

“The eight states with the highest current case rates have seen an average increase of 171% in the number of people newly vaccinated, each day over the past three weeks,” he said.

“Louisiana has seen a 302% increase in the average number of newly vaccinated per day, Mississippi 250%, Alabama 215%, and Arkansas 206%,” Zients said Monday at a briefing.

Zients said this increase means people are understanding the risks of going unvaccinated.

“This increase in vaccination rates in states that have been lagging is a positive trend. Americans are seeing the risk and impact of being unvaccinated and responding with action. And that’s what it’s going to take to get us out of this pandemic,” he said.

More than 99.99% of people fully vaccinated against Covid-19 have not had a breakthrough case resulting in hospitalization or death, according to the latest data from the CDC.

In the past two weeks, daily case rates have gone up fourfold, Collins said. This increase comes as the Delta variant spreads and the percentage of fully vaccinated Americans hovers around 49.7%, according to the US Centers for Disease Control and Prevention. Hospitals are once again filling up with patients as the virus tears through the unvaccinated population.

The US by Monday had vaccinated 70% of adults with at least one dose of a coronavirus vaccine, the White House’s Covid-19 data director, Cyrus Shahpar, said on Twitter.

This is the goal the Biden administration originally set for July 4, so it’s roughly a month behind that deadline.

The CDC reported Sunday that 816,203 additional doses were administered, the fifth straight day the agency recorded more than 700,000 shots in arms. The current seven-day average of doses administered is 662,529 per day, the highest average since July 7.

Dr. Anthony Fauci, director of the National Institute of Allergy and Infectious Diseases, attributed the increase to two likely factors: trusted leaders coming out in support of vaccines and people seeing how much better vaccinated communities are faring against the virus, he told CBS on Sunday.

In Florida, where nearly 1 in 5 new Covid cases across the US are reported, chief clinical officer for AdventHealth Central Florida, Dr. Neil Finkler, said none of his patients thought they would get the virus.

“The Delta variant has proven to be so highly contagious that even the young and the healthy, including pregnant patients, are now starting to fill up our hospitals,” said Finkler.

The race to get people vaccinated

Despite the rising number of Covid-19 cases, Fauci believes there is enough community protection to prevent the country from having to implement lockdown measures again, he told ABC on Sunday.

“I think we have enough of the percentage of people in the country, not enough to crush the outbreak, but I believe enough to not allow us to get into the situation we were in last winter,” he said.

But things are still likely to get worse for the unvaccinated, Fauci warned.

“We’re looking to some pain and suffering in the future because we’re seeing cases go up,” he told ABC.

To address the overall impacts, many officials have been increasing vaccination efforts in undervaccinated communities.

“I think … fear of the Delta variant is certainly one of the causes,” DeWine told CNN on Sunday.

Ohio is now focusing outreach efforts to the “undervaccinated” Medicaid population through incentives like $100 cash awards for getting the shot, DeWine said.

The state’s “Vax-a-Million” lottery program also played a major role in reversing a downward trend in vacation rates, he said.

“We think well over 100,000 extra people were vaccinated, at a minimum, because of that,” DeWine said. “It was very, very successful. It was something that worked and, you know, we are glad we did it.”

Despite the state’s progress on vaccinations, “We have room to grow,” DeWine said.

The surge of Covid-19 patients in hospitals could have an impact on others who need medical care, doctors said.

In Austin, Texas, “our ICU capacity is reaching a critical point where the level of risk to the entire community has significantly increased, and not just to those who are needing treatment for COVID,” Austin-Travis County Health Authority Dr. Desmar Walkes said in a statement.

“If we fail to come together as a community now, we jeopardize the lives of loved ones who might need critical care.”

In Mississippi, Covid-19 hospitalizations have increased significantly – including among younger patients, State Health Officer Dr. Thomas Dobbs said. All 88 beds in the University of Mississippi Medical Center’s intensive care unit had filled up by Friday, according to data from the state’s health department.

And in Louisiana, “we’re becoming victims of the unvaccinated,” said Dr. Christopher Thomas, a critical care physician at Our Lady of the Lake Regional Medical Center in Baton Rouge.

“We currently are overwhelming our bed capacity. We’re creating burnout for our teams. And honestly, we’re beginning to impact the rest of the health care for the community.”

The facility has 23 patients wating for a transfer into the hospital for an ICU bed, Dr. Catherine O’Neal, the hospital’s chief medical officer, said Monday.

“We no longer think we’re giving adequate care to anybody, because these are the darkest days of the pandemic.”

“That means there are children – with parents – who are now in the hospital,” he said.

Correction: An earlier version of this story gave the wrong timing for when the doses were administered when discussing the rate of daily vaccines. The Centers for Disease Control and Prevention reported the additional doses Sunday, but it’s not clear when they were all administered.