"Fast-moving" storms rolling across New South Wales and southern Queensland, have brought large hailstones and heavy rain, with a tornado warning issued for Sydney this afternoon.

Westfield in Mt Druitt, in Sydney's west, has been evacuated after the roof partially collapsed.

The Bureau of Meteorology (BoM) issued a severe weather warning for large parts of Sydney and the Central Coast around 4pm.

A tornado warning has since been downgraded, but very dangerous thunderstorms are still in the area, BoM said.

"The Bureau of Meteorology warns that, at 4:05 pm, very dangerous thunderstorms were detected on the weather radar near Horsley Park, Riverstone and Fairfield," it said.

"These thunderstorms are moving towards the south to south-east.

The BoM issued the tornado warning but removed the threat shortly after 5pm.

Anyone planning to travel between Sydney and Central Coast has been urged to be careful, with large hailstones predicted.

Thunder started rumbling over Sydney around 3.30pm with heavy rain and hail following soon after.

Three to four centimetre hail was reported in the Blue Mountains around 3pm. 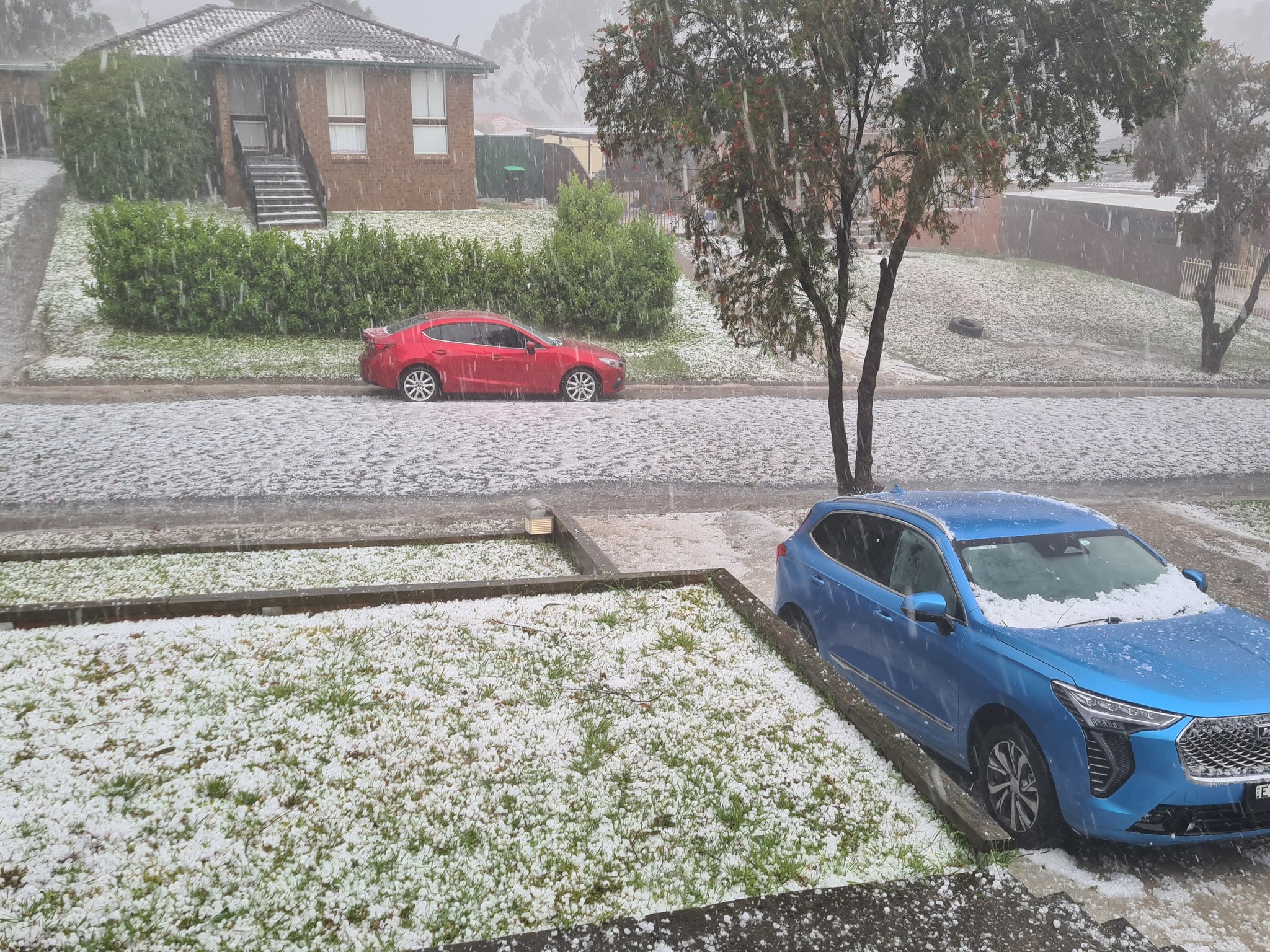 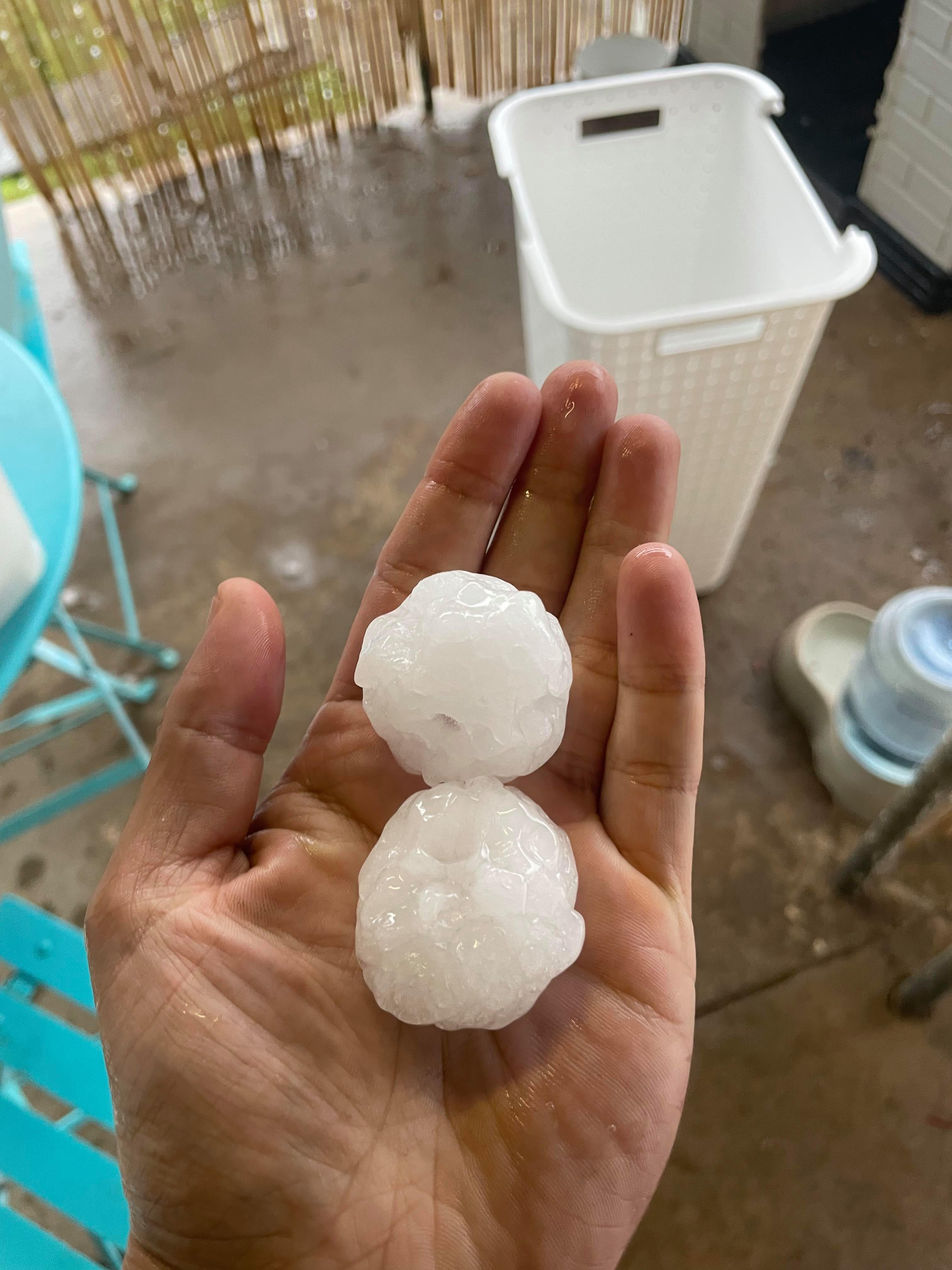 Bargo, in the state's south-west, has been pummelled with large hailstones, as has Sydney's west.

There are reports hail has fallen in the state's Mid North Coast.

The dangerous storms are anticipated across NSW and Queensland, Weatherzone said. 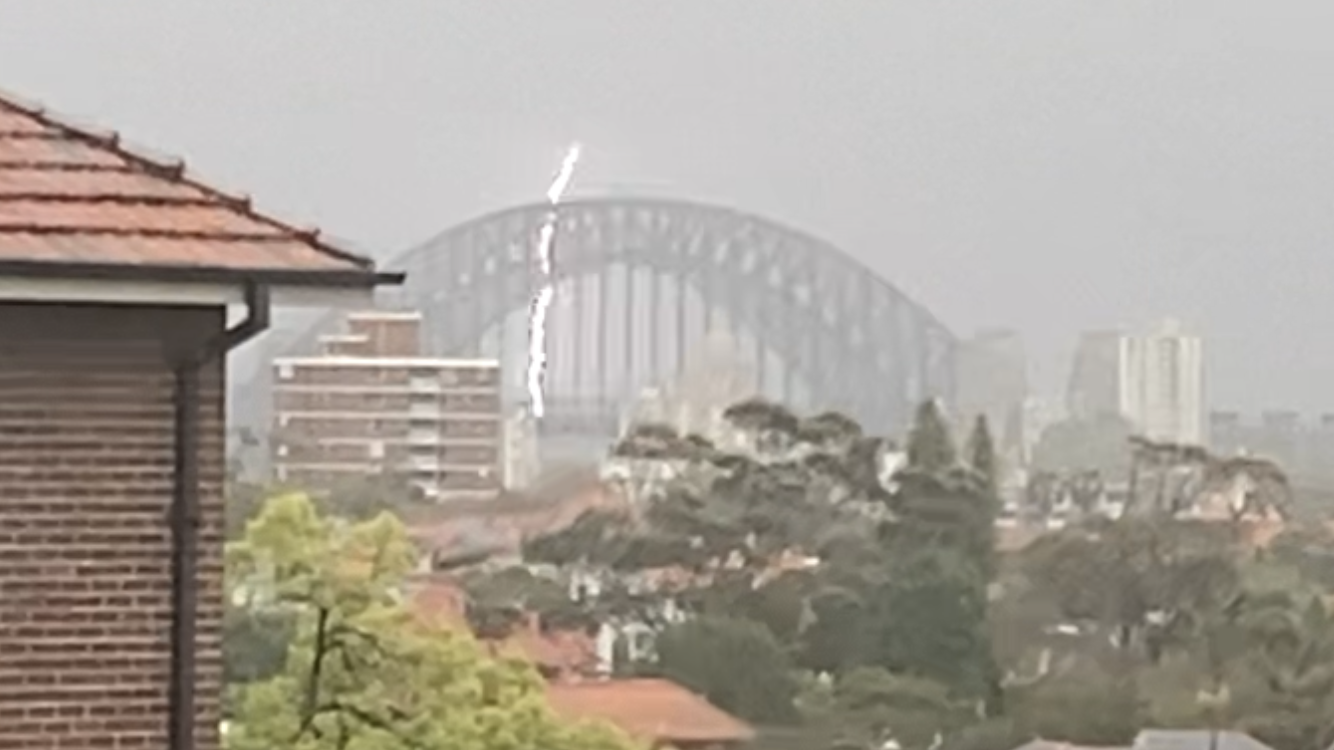 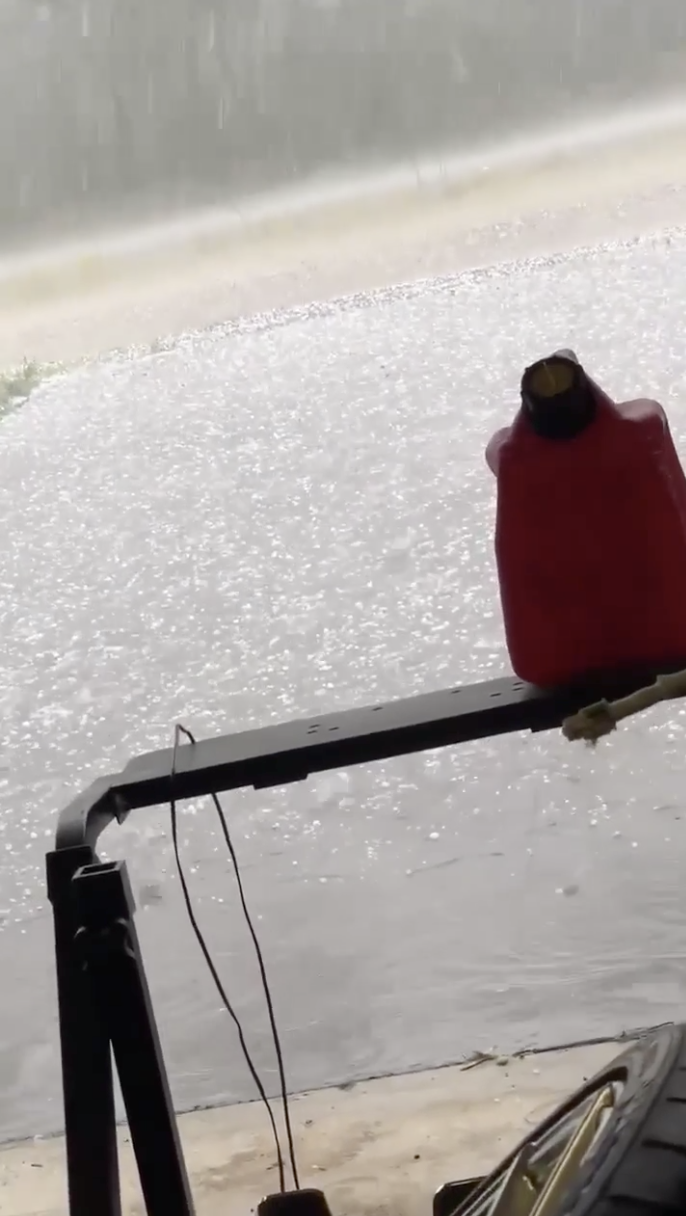 A severe thunderstorm warning has been issued for parts of Queensland.

The storm front comes after a severe weather warning issued for Brisbane, Moreton Bay and Darling Downs this morning was cancelled.

The BoM said storms are "likely" to re-develop over south-east Queensland this afternoon.

"The cluster is breaking up now but a second round of storms is likely to erupt again this afternoon over a broad area from the NSW border to the southern Capricornia and west to the Maranoa, with a potential for supercell activity in the southeast corner including destructive winds and even giant hail," meteorologist Shane Kennedy said.

"Showers and thunderstorms redeveloping tomorrow through eastern Queensland with the focus of activity gradually shifting north."

Meteorologist Jonathan Howe from the BoM had earlier warned tornadoes have been produced by dangerous weather cells like this one.

"Today is tricky because there is a small scale phenomenon but the ingredients for today do line up," Mr Howe said.

"So we can't predict where exactly they will form but the environment is conducive to seeing the supercell thunderstorms which do produce their tornado events."

Storms to intensify from mid-morning onwards

"In eastern Australia, convective clouds will grow taller as the day warms up, allowing showers and thunderstorms to become more widespread and intense from the late morning and afternoon," a Weatherzone spokesperson told 9news.com.au.

See also  Would you be able to survive in the bush?

"Storms are likely to develop over a broad area stretching from central Queensland down to northern Tasmania."

The BoM was affected when the storm started brewing this morning, with phone lines going down when the building was struck by lightning.

Minister for Agriculture David Littleproud described the storms as "a doozy" in an interview with 4BC's Neil Breen. 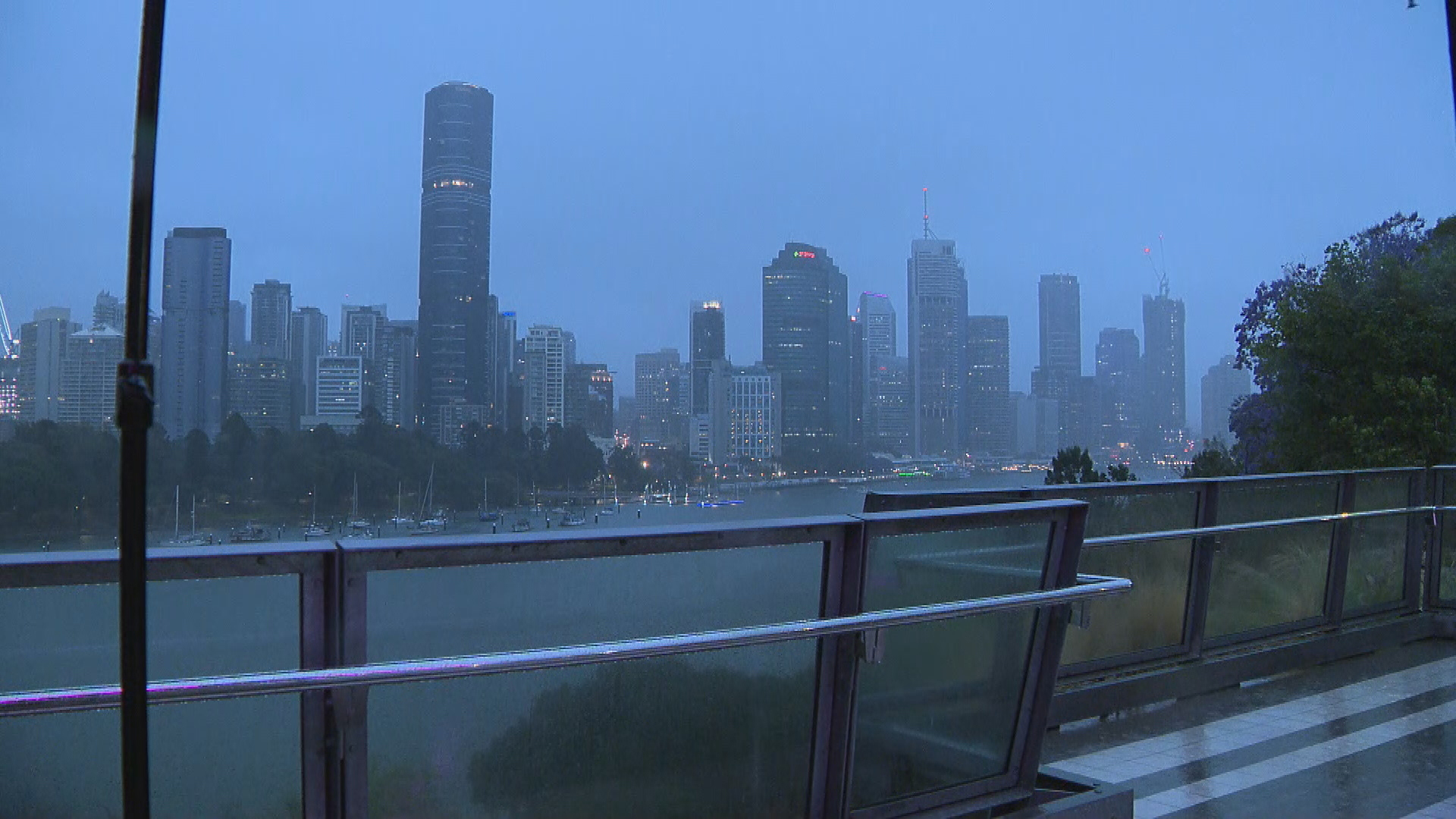 "I was at a motel and about 2.30 this morning, it just woke me up," he said, adding the rain was welcome news for farmers.

"Huge thunder and lightning here, and it just bucketed down, and it only just stopped probably about 40 minutes ago.

"So, I think the reports around 50 millimetres, so there'll be a bit of water running into the system, which is good."

Loudoun Bridge near Towoomba was smashed by 51mm of rain in just an hour overnight.

People are being warned to take place on the roads with flash flooding possible.

Earlier this week parts of south-east Queensland saw a month's rain in a day.

Forecasters have warned of a La Nina weather pattern this summer which would bring more rain.

Gunman arrested after shootout on freeway in Perth’s east

At least 50 Australians stuck in Kabul after rescue mission ends