What Is Carson Kressley’s Net Worth?

Carson Kressley is an American television personality, fashion designer, actor, producer, and author who has a net worth of $8 million. Kressley is best known as the “Fashion Savant” on the Bravo reality series “Queer Eye for the Straight Guy” (2003-2007), which later became known as simply “Queer Eye.” Carson co-hosted the ABC reality series “True Beauty” in 2010, and he has been a judge on “RuPaul’s Drag Race” (2015–present), “RuPaul’s Drag Race All Stars” (2016–present), and “RuPaul’s Secret Celebrity Drag Race” (2020–present). He is a producer on “RuPaul’s Drag Race All Stars,” and he also produced the film “16 to Life” (2009) and produced and hosted “How to Look Good Naked” (2008) and “Get a Room with Carson & Thom” (2018).

Carson Kressley was born Carson Lee Kressley on November 11, 1969, in Allentown, Pennsylvania. He grew up in nearby Orefield, and he attended New Tripoli’s Northwestern Lehigh High School. After graduating in 1987, Carson enrolled at Gettysburg College, where he majored in management and earned a bachelor’s degree in 1991. As a college student, Kressley was elected to the fraternity Phi Beta Kappa, and he joined the service fraternity Alpha Phi Omega as well as the equestrian team and the management club. Carson’s family raised ponies, and he began competing in equestrian events at a young age. He continued as an adult, making it onto the U.S. World Cup Saddle Seat equitation team in the late ’90s.

Kressley’s career began as an independent stylist, then from 1994 to 2002, he worked in corporate advertising and menswear for Ralph Lauren. From 2003 to 2007, he starred on “Queer Eye” alongside “Food and Wine Connoisseur” Ted Allen, “Grooming Guru” Kyan Douglas, “Design Doctor” Thom Filicia, and “Culture Vulture” Jai Rodriguez. The series aired 100 episodes over five seasons and won a Primetime Emmy and two GLAAD Media Awards for Outstanding Reality Program. In 2006, Carson launched the clothing line Perfect, which he described as “basics with a twist,” on QVC, and in 2012, he began selling his Love, Carson womenswear collection on Shop NBC. Kressley was a judge at the 2005 Miss Universe pageant, and the following year, he was a commentator for the Miss Universe and Miss USA pageants. In 2008, he hosted “How to Look Good Naked,” a makeover show that aired on Lifetime, and acted as the Master of Ceremonies for Cyndi Lauper’s True Colors Tour 2008. In 2011, Kressley hosted “Carson Nation” on the Oprah Winfrey Network. 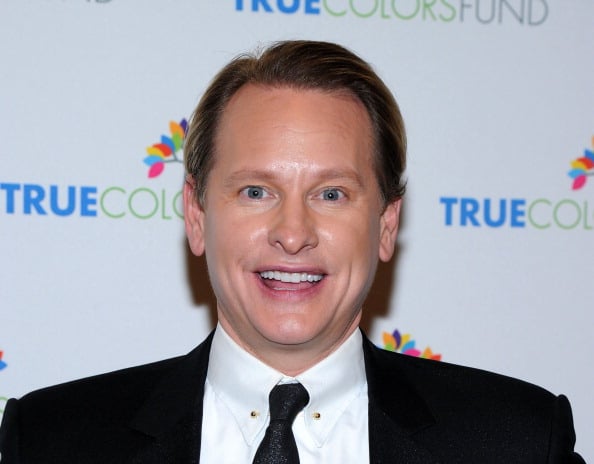 Besides his stint on “Dancing with the Stars,” Kressley has also competed on “Celebrity Family Feud,” “I’m a Celebrity…Get Me Out of Here!” (Australian version), “Worst Cooks in America,” “The Chase,” and “The $100,000 Pyramid.” In 2006, he lost “Celebrity Jeopardy!” by just $1, and in 2017, he finished in sixth place on “The New Celebrity Apprentice,” winning $25,000 for Cyndi Lauper’s True Colors Fund (now known as True Colors United), which “implements innovative solutions to youth homelessness that focus on the unique experiences of LGBTQ young people.” In 2022, Kressley competed on “Celebrity Big Brother” and was voted America’s Favorite Houseguest by fans of the show; he donated his $25,000 prize to True Colors United. He has been a judge on several shows, including the mother-daughter beauty pageant series “Crowned: The Mother of All Pageants,” the gift wrapping competition “Wrap Battle,” and the barbecue competition “BBQ Brawl.” Carson became a regular judge on “RuPaul’s Drag Race” in 2015, followed by “RuPaul’s Drag Race All Stars” in 2016 and “RuPaul’s Secret Celebrity Drag Race” in 2020. In 2022, Kressley appeared in the documentaries “All Man: The International Male Story” and “Pride Eve.”

In 2006, Carson became a minister of the Universal Life Church after getting ordained on the internet in order to officiate a wedding ceremony on “Queer Eye.” Kressley owns American Saddlebred horses, and in 2009, he won a world title as a horse show exhibitor. In 2007, he served as an ambassador for the Melbourne Cup and took part in the “Fashions on the Field” event.

“Queer Eye” earned two Primetime Emmy nominations for Outstanding Reality Program, winning in 2004. In 2022, Carson won a PGA Award for Outstanding Producer of Game & Competition Television for “RuPaul’s Drag Race,” and in 2009, he received a Teen Choice Award nomination for Choice TV Fab-u-lous for “How to Look Good Naked” and “Queer Eye.”

Kressley lives in a 3,819 square foot home on a 10-acre lot in New Tripoli, Pennsylvania, and he owns a nearby horse farm. The home was built in the early ’70s and includes four bedrooms and three bathrooms. According to property records, Carson paid $475,000 for the home in 2014. In 2004, he bought a one-bedroom, one-bathroom Manhattan apartment for $735,000.