The Greatest Sports Business Deal Of All Time Back in 2007, the National Basketball Association struck a deal with ABC/ESPN and TNT in which the television networks agreed to pay $7.4 billion over 8 seasons for the right to broadcast NBA games. That $7.4 billion, which belonged to the league’s team owners, was not paid upfront, all at once. A pro-rated $7.4 billion was paid monthly to the team owners.

So, in practice, every month over the lifetime of that agreement someone from the NBA’s finance department accumulated the disbursement and divided it up to be sent out to 31 recipients.

That extra check went to a pair of brothers named Ozzie and Daniel Silna. The Silna brothers did not own an NBA team. In fact, they were universally despised by NBA executives and team owners.

So why did they get a cut of NBA television royalties? Because decades earlier the Silna brothers accidentally found themselves sitting on what is today considered the greatest sports business deal of all time.

Ozzie and Daniel Silna were born in 1933 and 1944, respectively, to a pair of Latvian immigrants who settled in New Jersey, by way of Palestine, in the 1930s. Their father ran a small textile business which both brothers took over and ran for two years until the company was sold in the early 1960s.

In case you were wondering, YES the brothers played basketball as kids. Neither was particularly good, but Dan in particular fell in love with all things basketball at an early age. That love eventually grew into a lifelong obsession and dream of owning an NBA team.

As a kid, Dan told himself:

And, once he became rich, that’s exactly what he did.

In the early 1970s Ozzie and Daniel launched their own knitting business. The brothers grew this knitting business into one of the largest manufacturers of polyester in the world. Their timing could not have been more perfect. Polyester was the fabric of choice for the fashion of disco dancers. As disco fever swept the nation in the 1970s, the Silna polyester business boomed and the brothers became rich. Rich enough to fulfill Dan’s childhood dream of owning an NBA team. But there would be a detour.

In 1974 the Silnas attempted to purchase the Detroit Pistons from the team’s founder Fred Zollner. The Silnas offered $4.85 million, which is the same as $30 million in today’s dollars. Zollner rejected their offer and ultimately accepted $7 million from another party.

There were no other NBA teams up for sale and it didn’t look like any would hit the market any time soon. Thankfully for Dan Silna, the NBA wasn’t the only game in town… literally.

As strange as it sounds, back in the mid-1970s there were actually TWO professional basketball leagues operating in the United States:

The ABA was founded in 1967 as an attempt to chip away at the NBA’s monopoly on professional basketball. You might assume the ABA was a joke, especially if you’re imagining the universe portrayed by Will Ferrell’s 2008 movie “Semi-Pro,” but that assumption is false. In the early-1970s, the ABA posed a significant challenge to the NBA’s dominance.

ABA owners were conducting a full-scale salary war against the NBA. ABA teams were offering young players much larger contracts than their NBA counterparts could ever dream of. The ABA also introduced exciting new concepts like the three-point line and the All Star Game dunk contest. Future NBA legends Julius Erving, Moses Malone, Connie Hawkins and Larry Brown all got their start in the ABA.

When the Silna brothers’ attempt to purchase an NBA franchise came up short, they went shopping for an ABA team. In 1973 they stuck a deal to purchase the ABA’s struggling Carolina Cougars for $1 million. As soon as the deal closed the brothers decided to move the team to St. Louis where they hoped to reach a larger contingent of basketball fans. They proceeded to pour an additional $3 million of their own money into the newly named “Spirits of St. Louis” signing hot young players and upgrading the team’s facilities. They also hired a young announcer fresh out of Syracuse broadcasting school by the name of Bob Costas to do the team’s play-by-play commentary. 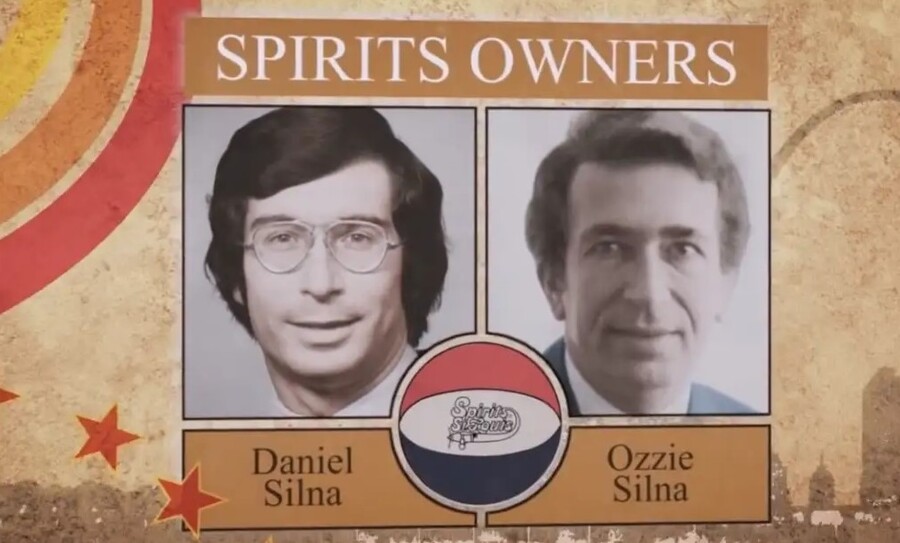 In their very first season the Spirits of St. Louis made the playoffs. They actually defeated the ABA defending champion New York Nets before losing to the eventual winning team, the Kentucky Colonels.

Unfortunately, that was the high point for the Spirits. A year later, in 1976, the American Basketball Association went belly up. As part of a dismantling agreement, the four most viable ABA teams became full-fledged NBA franchises. Those four lucky teams were:

Of the three remaining ABA teams, the Virginia Squires went bankrupt before any financial compensation agreement could be made with the NBA. That left the Kentucky Colonels and the Spirits of St. Louis. As part of the dismantling agreement, both teams needed to approve the merger for the deal to go through. The Kentucky Colonels’ owner (who was the president and largest shareholder of Kentucky Fried Chicken) accepted a $3.3 million buyout offer and then went on to successfully run for Governor.

Having just poured their hearts and souls into their beloved Spirits, the Silna brothers were much more reluctant to accept a quick buyout and disappear from basketball forever. They did agree to accept a $2.2 million lump sum for the right to draft their former players into the NBA. But that wasn’t enough.

To make the Silnas happy and get them to go away, some long-forgotten NBA executive hatched an idea that the league assumed would be a meaningless concession.

In the 1970s, NBA television viewership was barely a blip on the ratings radar. Games were barely aired. Even NBA championship series were shown on tape delay after the 11pm news. And that was a championship game!

To make the brothers happy, NBA executives offered the Silnas a small percentage of “Visual Media” (aka television) rights.

More specifically, their offer was for a 1/7 cut of any revenues earned by the four ABA teams that were being absorbed into the NBA. In other words, the Silnas would give up their ABA franchise in exchange for 1/7 of the television revenues generated by the Spurs, Nuggets, Nets and Pacers. And here’s the kicker: The 1/7th ownership stake would last in perpetuity. Meaning, forever, or as long as the NBA exists as an viable entity. Specifically the contract read:

“The right to receive such revenues shall continue for as long as the NBA or its successors continues in its existence.“

The Silnas accepted. Their attorney who negotiated the deal, got a 10% cut of the Silna’s royalties.

For the first years, between 1976 and 1978, the Silnas did not earn a dime from the NBA and the league looked like it had negotiated a brilliant deal. In 1979 however, the Silna’s received their first royalty check in the amount of $200,000.

Then, between 1980 and 1995, the NBA’s popularity exploded thanks to players like Kareem Abdul-Jabbar, Larry Bird, Magic Johnson and later Michael Jordan, Charles Barkley and Shaquille O’Neal. And with that explosion in popularity came several very large television contracts.

The first mega contract that the NBA struck happened in 1997 when NBC and Turner agreed to pay $2.7 billion to broadcast games. Five years later, ABC/ESPN/TNT agreed to pay a combined $4.6 billion. In 2007, ABC/ESPN/TNT signed that eight-year $7.4 billion that we mentioned at the beginning of this article.

Every time a new deal was stuck, the Silna brothers cashed in.

Between 1976 and 2013, NBA television royalties paid Ozzie and Daniel Silna…

But wait, it gets better…

Because the language in their original contract covered all “visual media” revenues, in 2012 the Silnas took the NBA to court over money earned from sources that were unimaginable back in 1976. For example, international broadcasts, internet rights and the NBA TV cable network. Amazingly, a Federal judge sided with the brothers and ruled that the NBA had to pay them to cover incremental revenues from the last few years, and increase future royalties going forward.

The NBA made a number of attempts to buy their way out of the deal over the years. In 1982 the NBA offered to buy the brothers out of their contract for $5 million paid over five years. The Silna countered with $8 million over eight years. The NBA declined!

The league kept at it, but as the royalties grew so did the cost of buying the Silnas off.

Finally, on January 7, 2014, the NBA announced that it had finally reached an agreement with Ozzie and Daniel that allowed both parties to walk away once and for all and end years of bitter back and forth lawsuits and animosity. The price to finally get rid of the Silnas?

The brothers accepted the deal in April 2014. The deal was concluded.

Younger brother Daniel is still alive! And while he may not have achieved his boyhood dream of owning an NBA team, he did get a nice consolation prize: $800 million worth of NBA TV royalties 🙂

ESPN: Who Is Erin Dolan? Find Out If She Is Married, Has A Boyfriend Or Single