Retired art dealer and author Forrest Fenn has now narrowed down the location of where the $3million treasure chest he hid 10 years ago was found – somewhere in Wyoming.

In 2010, Fenn published a memoir, The Thrill of the Chase, in which he included a poem with clues to the location of a treasure chest – supposedly filled with $3million of gold and other valuable antique items – he’d hidden somewhere in the Rocky Mountains.

Hundreds of thousands of people are believed to have gone on the hunt, covering grounds from New Mexico to Montana, and at least five people died in the process of searching for Fenn’s hidden fortune, KRQE reported. 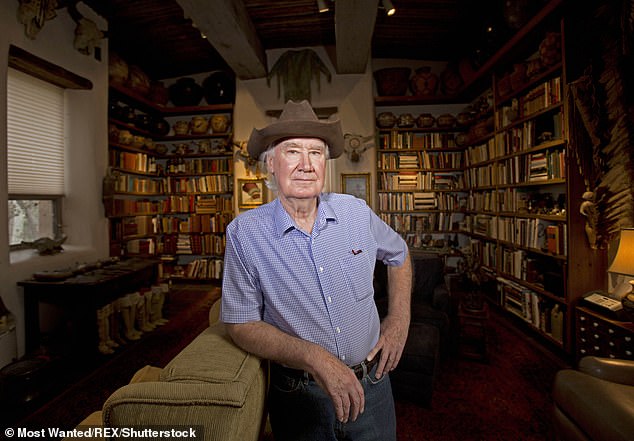 Art dealer Forrest Fenn (in 2013) revealed that his $3million treasure was tracked down in Wyoming, more than a month after he said it was found by an anonymous treasure hunter 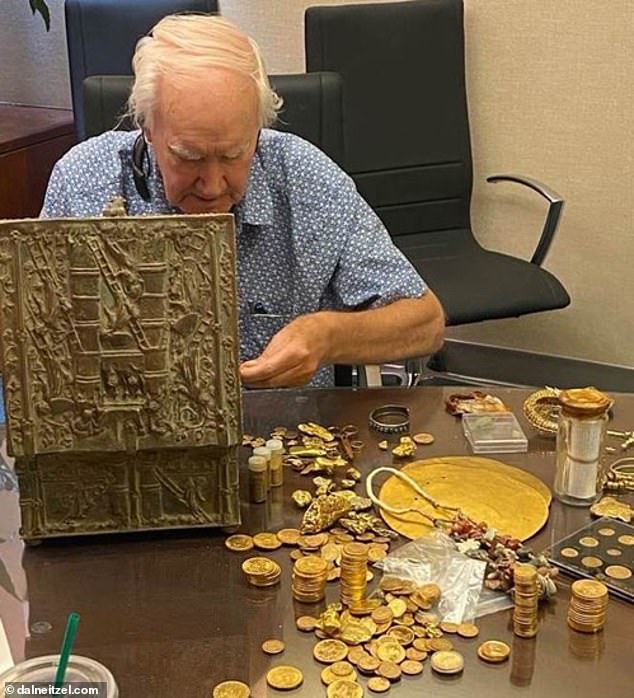 But, on June 6, Fenn, of Sante Fe, New Mexico, revealed in a blog post that the treasure chest had been found finally, but declined to provide more details about who the lucky treasure hunter is or where exactly it was tracked down.

All Fenn, now 89, said at the time was that the treasure ‘was under a canopy of stars in the lush, forested vegetation of the Rocky Mountains and had not moved from the spot where I hid it more than 10 years ago.’

He also wrote that, ‘The treasure chest was found by a man I did not know and had not communicated with since 2018.’

More than a month later, Fenn has now decided to throw his fans – and disappointed treasure hunters – a bone, though, by giving them a tiny hint about where the chest was found.

Fenn reiterated that he had promised the lucky finder that he’d keep mum about the person’s identity and the location of where the 20 pound chest filled with 22 pounds of valuables was found.

‘However, the finder understands how important some closure is for many searchers, so today he agreed that we should reveal that the treasure was found in Wyoming,’ Fenn wrote on July 22. 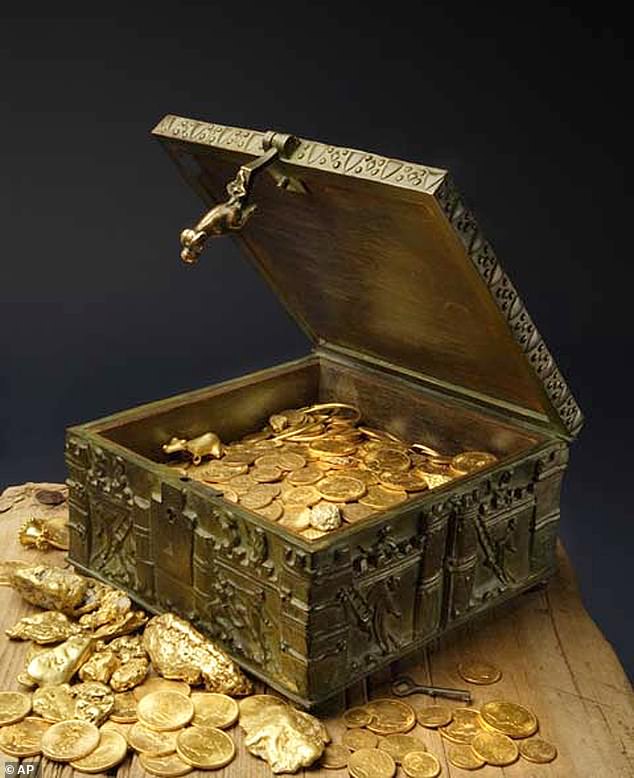 An undated photo of the bronze chest, gold coins and other antiques making up the treasure 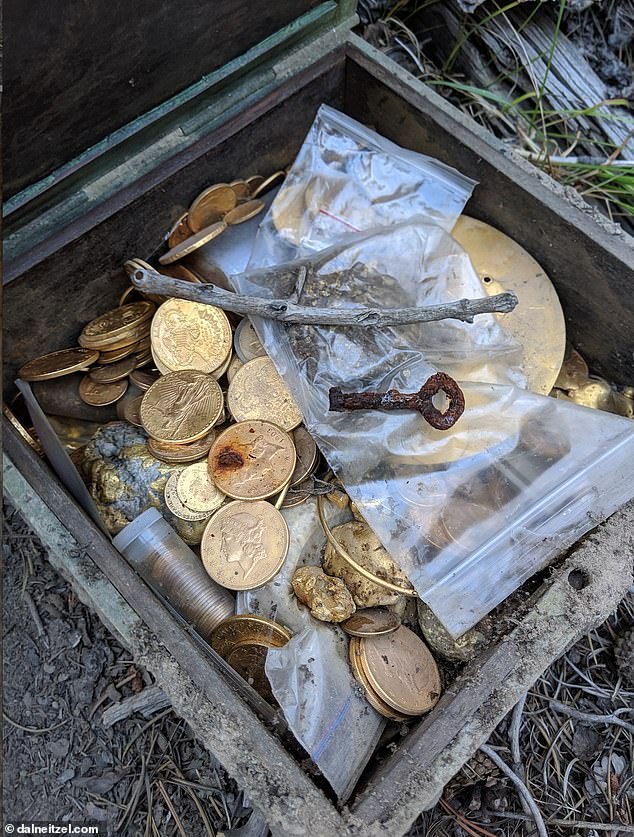 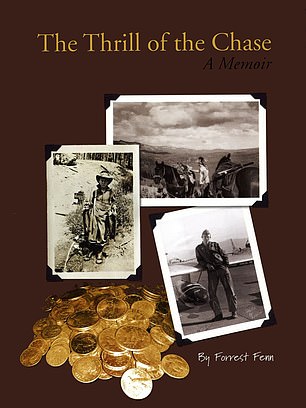 Fenn models a bracelet (left) that had tarnished over the 10 years since he left the treasure in Wyoming. His memoir, with the poem that sparked the treasure hunt, is seen at right

‘Perhaps today’s announcement will bring some closure to those whose solves were in New Mexico, Colorado, or Montana.’

Fenn also wrote that in ‘the treasure had not moved in the 10 years since I left it there on the ground, and walked away’ – implying that he hadn’t even bothered to bury it.

He concluded the post by writing: ‘To all of those who did not find the treasure, we hope that you got some enjoyment from the chase.’

Bilyeu was found dead in New Mexico’s back country in 2016. Murphy’s body was found in Yellowstone National Park in 2018, after he’d disappeared there in 2017.

In 2017, Wallice’s body was found in northern New Mexico, while Ashby’s remains were found in Colorado.

Sexson died in March 2020 while in Dinosaur National Monument, along the Utah-Colorado border.

Fenn faced criticism follow each of the treasure hunters’ deaths, but declined to call off the search.

Instead, in June 2017, he made it a point to warn treasure hunters to stay safe during their search.

‘The treasure chest is not under water, nor is it near the Rio Grande River. It is not necessary to move large rocks or climb up or down a steep precipice, and it is not under a man-made object,’ Fenn wrote on a blog devoted to the search.

‘Please remember that I was about 80 when I made two trips from my vehicle to where I hid the treasure. Please be cautious and don’t take risks.’ 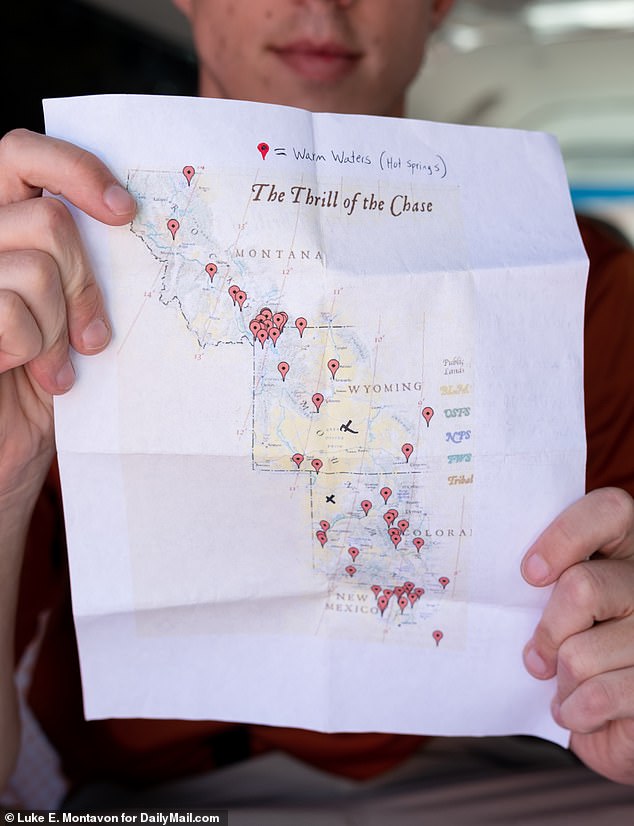 In June, after Fenn revealed that the treasure was found, but before he posted pictures of the cache, Bilyeu’s wife, Linda Bilyeu, told Westword that she believed Fenn ‘never hid the treasure.’

‘He needed attention and this is how he got it,’ she said. ‘Fenn needed more attention, which is why he said the treasure has been found with “no proof.”‘

In an interview in 2018, Fenn explained why he decided to hide the bounty.

‘I had several motives,’ Fenn said. ‘First of all, we were going into a recession – lots of people losing their jobs. I wanted to give some people hope. Despair was written all over the newspaper headlines.

‘And secondly, we’re an overweight society – I think not only in this country, but the world,’ said Fenn, who ran a successful Santa Fe art gallery with his wife for 17 years.

‘So I wanted to get the kids away from their electronic gadgets … and out into the sunshine, out into the mountains, hiking, fishing, picnicking – and anything but the couch. Get out of the game room.’

The idea came to him after he was diagnosed with kidney cancer in 1988 and given a 20 percent survival rate.

‘I went through all of the emotions like everybody else does – denial, anger, all of those things,’ said Fenn, who has two daughters with his wife.

‘But then, after a week or so, I told myself: ‘Okay – if I’ve got to go, who says I can’t take it with me?’ I had a bunch of stuff, and I had so much fun collecting it over 75 years, why not give somebody else the same opportunity that I had?

‘I mean, I’m not going to miss these things. My family has been cared for. And so I got this beautiful little treasure chest; I gave $25,000 for it, and I started. My problem was, I wanted it to be valuable, but I also wanted it to be survivable, also. That boils down to gold, essentially, and precious gems.’

He began assembling a cache that included ‘hundreds and hundreds of gold nuggets.’

He added: ‘I’ve given to charity, and everybody else has, too. That’s been done. I wanted to do something that would last. I wanted to introduce the Rocky Mountains to people – flatlanders – that’d go back over and over again. I mean, if I gave to a charity, that’d be the end of it.

‘A 79 or 80 year old man went to that hiding place twice in one afternoon. There’s no point climbing up to the top of the mountain or hiking 20 miles looking for the treasure.’

‘I didn’t expect it to catch fire like it has, but I think 350,000 people have been looking for the treasure,’ Fenn told DailyMail.com in 2018. ‘Of course, it’s been eight years, too; some of them go back multiple times.’

Coronavirus: ‘Soft play is heading for a cliff edge’

‘Injured bats hide under my sofa’

Donald Trump defends having wine-drinking members of his golf club crowd into...