American children became 10 per cent fatter during the pandemic, an ‘alarming’ study suggests.

A team from the Children’s Hospital of The King’s Daughters in Virginia looked at more than 200 children’s BMIs two years before the pandemic and in 2021.

They found that average BMI increased by an average of 11 per cent — however the increase was only significant in girls.

The researchers warned the damage done to children’s waistlines during Covid ‘will likely stay with us long after Covid lifestyle modifications [are] no longer at play’. 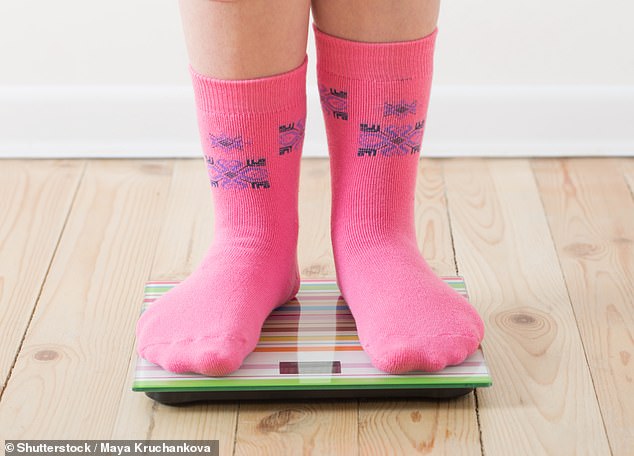 The researchers tracked the BMIs of 238 children two years before the pandemic and one year after the start of the pandemic in Norfolk, Virginia.

The majority of the children were Black, had an average age of 10 and there was an almost 50/50 split of girls and boys.

The researchers recorded the children’s BMIs for at least two visits one year apart.

Organized sports can have ‘dramatic’ benefits for teens’ mental health and quality of life, another study found.

17,421 teens nationwide filled out surveys on their sport participation and mental state in May 2020, when sports were canceled due to Covid, and then again in May 2021 after they had returned to sports.

In May 2020, teens reported low levels of physical activity, poor quality of life and soaring rates of anxiety and depression.

A year later, after returning to sports, they were exercising far more and had a higher quality of life, with the amount of teens who said they were suffering moderate to severe anxiety or depression roughly halved.

However, the levels of anxiety, depression and quality of life are still worse than before the Covid, meaning while sport might be psychologically beneficial, the effects of the pandemic cannot be overlooked.

Study author Dr Drew Watson, physician for the University of Wisconsin Athletics, said: ‘The cancellation of sports in the early pandemic was accompanied by decreased physical activity and quality of life, as well as startlingly high levels of anxiety and depression.

‘Although the return to sports has been associated with large improvements in physical activity levels, quality of life and mental health, we are still seeing higher levels of anxiety and depression than before Covid, suggesting that this will remain a vitally important priority for years to come.’

A healthy person’s BMI – calculated by dividing weight in kg by height in meters, and the answer by the height again – is between 18.5 and 24.9.

Among children, obesity is defined as being in the 95th percentile.

Percentiles compare youngsters to others their same age.

For example, if a three-month-old is in the 40th percentile for weight, that means that 40 per cent of three-month-olds weigh the same or less than that baby.

BMI percentile did increase significantly from the beginning of Covid lockdowns to May 2021.

Children from lower income families saw the biggest rises in their BMI.

Dr John Harrington, senior co-author of the study and division director of general academic pediatrics at The King’s Daughters, said: ‘This study reinforces that the health of all communities was negatively impacted by the pandemic, especially lower income and predominantly African-American communities.’

He added that the study demonstrates how tough the lockdowns were on families as parents were anxious about their children being outside or around others in case they caught the virus.

And children missed out on team sports and physical education at school, spending more time scrolling on social media and playing video games.

The study will be presented at the 2022 American Academy of Pediatrics National Conference & Exhibition.

Almost one in five children aged two to 19 in the US are obese, according to the CDC.

Nearly a quarter of black children (24.8 per cent) are obese, compared to 16.6 per cent of white children.

Research suggests that 70 per cent of obese youngsters have high blood pressure or raised cholesterol, which puts them at risk of heart disease later in life.

And if children are overweight, their obesity in adulthood is often more severe.

Meanwhile, screen time can be detrimental to children’s brains and waistlines.

Data from ongoing studies by the National Institutes of Health (NIH) found in 2018 that children spending two hours a day on screens scored lower on language and thinking tests.

And those with excessive screen time showed a premature thinning of the cortex, the outer layer of the brain which processes sensory information.

A 2013 study by the Harvard School of Public Health in Boston found that children who spend hours in front of screens are more likely to gain weight over their life, due to the screen time leading to poor eating habits.

PROFESSOR ROB GALLOWAY: We can save lives because of the speedy use of easy expertise