Fatal drug overdoses have risen in all but eight US states in the past year, according to official data that lays bare America’s drug crisis.

The Centers for Disease Control and Prevention (CDC) estimates there were a total of 109,673 overdose deaths in the year to April — a new record.

And the provisional death count is likely to be an underestimate, the CDC said, because it is often incomplete and some causes of death may be pending investigation.

The majority of deaths were caused by opioids — an addictive class of drug the US has been grappling with for decades — and the synthetic opioid fentanyl which has been flooding American streets in recent years.

Alaska has seen by far the biggest percentage increase in drug overdose deaths between April 2021 and April 2022, rising by 44 per cent. It was the only state with an increase of more than 40 per cent year-on-year.

Alaska was followed by Idaho, which had an increase of nearly 30 per cent, and New Hampshire, with a rise of 29 per cent. Oklahoma and Washington round out the top five at 25 per cent and 23 per cent.

America’s drug crisis, which has been surging for decades, was made worse during the pandemic when lockdowns and hospital closures left people particularly vulnerable to addiction.

Officials said those who had drug habits were suddenly not able to meet with their healthcare providers face-to-face and worries about job security and lack of social contact pushed more people into drug use. 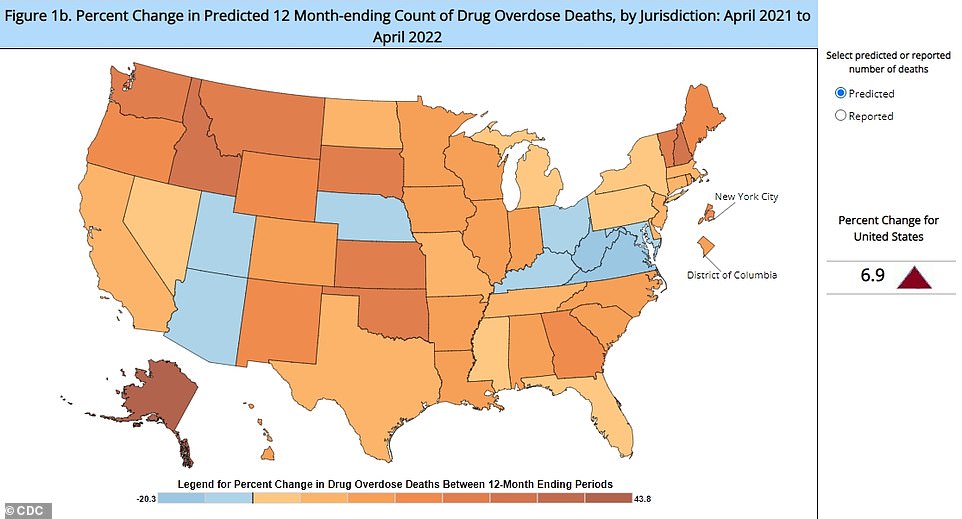 Alaska is predicted the biggest increase in overdose deaths, at 43.82 per cent (burgundy). It was the only US state to have an increase of 40 per cent or more. Eight states have predicted decreases between April 2021 and April 2022

Drug overdose deaths reached its apex between February 2021 and February 2022, when the CDC predicted 109,673 deaths were caused by people taking lethal amounts of drugs. The total count looks like it is coming down, but the CDC notes reported provisional counts may not include all deaths that occurred during a given time period, and therefore are subject to change

Alaska has seen by far the biggest percentage increase in drug overdose deaths between April 2021 and April 2022, rising sharply by 43.82 per cent

The next biggest percentage increase was Idaho, with an increase of 29.93 per cent. Idaho’s rates have steadily increased over the years

New Hampshire was predicted an increase in drug overdose deaths of 29.30 per cent

Oklahoma was also predicted a large increase of 25.22 per cent, having seen a dip in drug overdose deaths in 2019

Washington also had a significant increase of 23.22 per cent, having had its drug overdose rate consistently increase, and more steeply since January 2020

How America got hooked on opioid drugs

Prescription opioids and illicit drugs have become incredibly pervasive throughout the US, and things are only getting worse.

In the early 2000s, the FDA and CDC started to notice a steady increase in cases of opioid addiction and overdose. In 2013, they issued guidelines to curb addiction.

However, that same year – now regarded as the year the epidemic took hold – a CDC report revealed an unprecedented surge in rates of opioid addiction.

Overdose deaths are now the leading cause of death among young Americans – killing more in a year than were ever killed annually by HIV, gun violence or car crashes.

Preliminary CDC data, published by the New York Times, showed that US drug overdose deaths surged 19 percent to at least 59,000 in 2016.

It means that for the first time drug overdoses are the leading cause of death for Americans under 50 years old.

Overall, the US had an increase of 6.9 per cent for deaths resulting from drug overdoses.

Not all states recorded rises in overdose deaths, however.

The deaths include unintentional, suicide, homicide and undetermined but a full breakdown won’t be available until later in the year, the CDC said.

The number of drugs caused by different drugs was also unavailable. Last year fentanyl was by far the biggest killer, accounting for 75 per cent of all opioid deaths.

US authorities have been on high alert over the past several years during a torrent of illegal fentanyl entering the country.

An analysis last month found the opioid epidemic in the US has cost the government nearly $1.5trillion in 2020 alone after being exacerbated by the Covid pandemic and rise of fentanyl.

The economic toll of opioids for 2020 marked a 37 per cent increase from 2017, the last year the cost was measured by federal authorities. The latest figures were revealed in a report by the Congressional Joint Economic Committee.

The committee believes society-wide upheaval during the pandemic may have prompted people to switch up dealers who were more likely to sell them fentanyl due to changing drug smuggling patterns.

‘Pandemic-related stress and additional barriers to care likely also led to increased relapse rates among those who struggle with opioid use,’ the report said.

It went on: ‘Factors like self-isolation and the economic shock of the pandemic were linked to higher levels of stress, anxiety and other mental health issues, which worsened conditions for those with substance use disorder.’