Youngsters born during the pandemic were less likely to have said their first words by their first birthday compared to babies born pre-Covid.

They were also less likely to be able to wave ‘bye’ or point at objects, researchers in Ireland found.

Bans on visiting grandparents and relatives were also blamed for depriving them of vital socializing time.

It is just the latest piece of evidence to highlight the devastating toll of pandemic restrictions on the health of America’s youth. 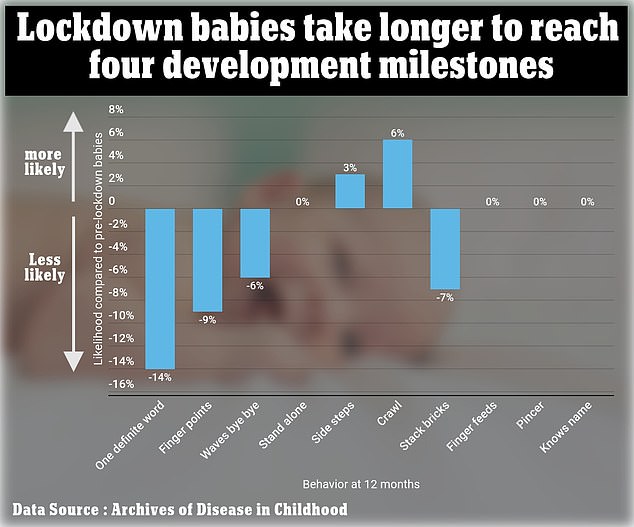 The above graph shows the likelihood of a particular behavior in pandemic babies compared to non-pandemic babies by their first birthday. Pincer refers to using the thumb and index fingure together. Pandemic babies were more likely to crawl, but less likely to be talking, pointing or waving goodbye

More than 3.6million babies were born in America over the first year of the Covid pandemic alone.

Evidence has already emerged suggesting that they suffered weakened immune systems due to the isolation, putting them at greater risk of nasty colds.

And today’s study is the latest to add to a growing body of evidence pointing to the measures as triggering delays in development for the youngest in society.

Record number of toddlers hospitalized with colds ‘due to lockdowns’

In the paper, led by the Royal College of Surgeons in Ireland, researchers looked at 309 babies born between March and May 2020.

Ireland was in lockdown for five months over that year, and spent many others under tight restrictions.

Parents were surveyed about 10 developmental milestones after their child turned one year old.

Lockdown babies were 14 per cent less likely to have said one definite word, results showed.

On the other hand, however, they were also significantly more likely to be crawling — at seven per cent.

Writing in the release, the College said: ‘Lockdown measures may have reduced the repertoire of language heard and the sight of unmasked faces speaking to [infants].

‘It may also have curtailed opportunities to encounter new items of interest, which might prompt pointing, and the frequency of social contacts to enable them to learn to wave bye-bye.

‘[But] they were still more likely to be crawling… which might be because they were more likely to have spent more time at home on the ground rather than out of the home in cars and strollers.’

The study relied on parental recall in some cases beyond a month after the child’s first birthday, which may affect the results.

It was also observational, meaning it could not confirm a definite link between lockdowns and delayed development.

Dr Lemmietta McNeilly, the chief of staff at the American Speech-Language-Hearing Association who was not involved in the research, told DailyMail.com babies may have lacked a first word because lockdowns meant they had ‘fewer needs to communicate’.

She added: ‘The need to follow the children who are in more naturalistic environments is necessary before determining if the [lockdown] children will have any lasting delays.

‘It is also important to note that the parents were living in a highly stressful environment as they dealt with the pandemic.’

The pandemic babies were from the CORAL study, or Impact of CoronaVirus Pandemic on Allergic and Autoimmune Dysregulation in Infants Born During Lockdown.

Those from before the pandemic were from the BASELINE study, or Babies after SCOPE, paper.

The study was published in the Archives of Disease in Childhood.

Cardi B celebrates her birthday in ‘F—k it’ sweatshirt

Are you a procrastinator? You’re extra prone to be depressed, unhealthy and broke, research suggests