Colonoscopy-based bowel cancer screening might not save people from dying, according to a major study.

Gastroenterologists have for decades hailed the uncomfortable procedure, which sees a small tube equipped with a camera go up the anus into the bowels to check for problems in the intestine.

But Norwegian researchers say the screening is not a ‘magic bullet’.

Offering a colonoscopy to people only prevented a fifth of cases.

And there was no significant difference in the number of deaths, the decade-long study of more than 80,000 people in their 50s and 60s revealed.

Experts said the real-world research, published in the prestigious New England Journal of Medicine, suggests colonoscopy might not be ‘as good as we always thought it is’.

They argued it is still a good screening tool because it helped spot cancers.

But the detection figures were no better than the at-home tests sent out to people aged aged 60 to 74 in the UK.

Colonoscopies for cancer are only provided to Brits on the NHS if their samples reveal blood in their stool. 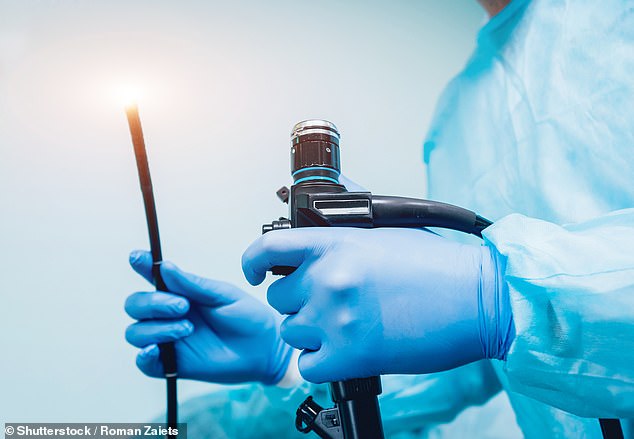 In contrast, the US Preventive Services Task Force recommends all adults aged 45 to 75 get a colonoscopy every decade, although it widened its strategy to include other tests in recent years.

Further analysis showed colonoscopies had a much clearer effect on cases and deaths when the experts looked at the fraction of people who actually came forward for a test.

But more than three in five were put off accepting an invitation to the colonoscopy. Many are put off by the tests’ invasiveness.

When researchers compared just those who had a scan to those who did not, they found coloscopies reduced cancer risk by 30 per cent and death by 50 per cent.

Colonoscopies can help spot small pre-cancerous growths that can then be cut out before they become a tumour.

This helps stops the cancer ever developing, and reduces the need for more invasive treatment like surgery, radiotherapy and chemotherapy later on.

Rates have soared over the past few decades, with experts blaming diets heavy in processed and red meat.

The first-of-its-kind random trial tracked the health records of 85,585 patients in Poland, Norway, Sweden and the Netherlands.

It was led by Professor Michael Bretthauer, a gastroenterologist at Oslo University Hospital.

Participants were aged 55 to 64 when the study began.

Some 28,220 were invited for a single colonoscopy screening, with 11,843 accepting the offer.

The others did not have the screening because it was not recommended in their country.

After a follow up of 10 years on average, there were 259 cases of bowel cancer in the screening group compared to 622 in the other cohort.

Statistical analysis suggested that colonoscopies only slashed rates of the disease by around 18 per cent.

Professor Bretthauer said: ‘It’s not the magic bullet we thought it was. I think we may have oversold colonoscopy.’

Dr Samir Gupta, a gastroenterologist at the University of California, San Diego, who was not involved in the study, told Stat: ‘This is a landmark study.

‘I think we were all expecting colonoscopy to do better. Maybe colonoscopy isn’t as good as we always thought it is.’

WHAT IS A COLONOSCOPY AND WHY IS IT IMPORTANT TO GET ONE EVERY 10 YEARS?

A colonoscopy is an exam that detects abnormalities and changes in the large intestine and in the abdomen.

How is it performed?

Patients are either sedated or, in rare cases, given general anesthesia, to dull the amount of pain they feel.

A long, flexible tube is inserted into the rectum. A tiny video camera is attached to the tip so the doctor can view the inside of the colon.

If necessary, the doctor can remove polyps or other types of abnormal tissue, as well as take tissue samples.

A colonoscopy will generally take about 30 to 60 minutes.

How do I prepare the day before a colonoscopy?

Doctors recommend that patients eat low-fiber foods that are easy to digest starting three to four days before the colonoscopy.

The day before the procedure, patients are not allowed to eat anything solid and can only consume clear liquids.

The night before the colonoscopy, patients have to take laxatives to make sure the digestive tract is clear.

When should I get a colonoscopy?

The U.S. Preventive Services Task Force recommends that all adults between ages 45 and 75 get screened for colon cancer.

Patients between ages 75 and 85 are recommended to speak to their doctors about when to get a colonoscopy.

If the colonoscopy doesn’t find any signs of cancer, it should be done every 10 years.

Why is it important to get a coloscopy?

Aside from skin cancers, colorectal cancer is the third most common cancer diagnosed in both men and women in the U.S.