Despite the steady decline of Covid viruses and deaths since the summer, Dr Fauci said Americans ‘should not be surprised’ if a highly transmissible variant emerges as the months get colder.

Fauci, who is set to retire from his post as director of the National Institutes of Health in the coming months, has become famous for his grim warnings about Covid surges, although this is the first such forecast he has issued in months.

People spend more time indoors with less ventilation during the winter months, making it easier for Covid to spread. The more the virus spreads and replicates, the greater chance it has at mutating to a new, more transmissible strain.

‘We should anticipate that we very well may get another variant that would emerge that would elude the immune response that we’ve gotten from infection and/or from vaccination,’ Dr Fauci added.

Dr Fauci has been painted by critics as a pessimist with little hope for the US’ recovery from the pandemic.

He did not identify a specific variant, but Dr Fauci said past winter surges should be an indication that the US is at risk of enduring another one.

The cases of Covid have consistently ticked up in the colder months when people spend more time indoors with less ventilation and less personal space than when outdoors in the summer months.

‘We are entering into the winter months, where no matter what the respiratory disease is, there’s always a risk of an uptick,’ Dr Fauci said. 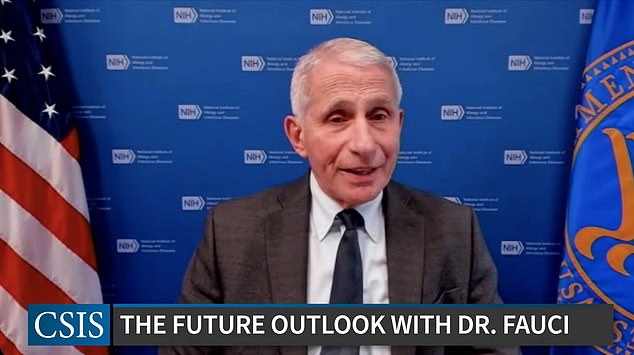 Fauci warned that a new, more transmissible variant with the ability evade immune protections could be on the horizon for the US, which has recorded huge surges for the past two winters. 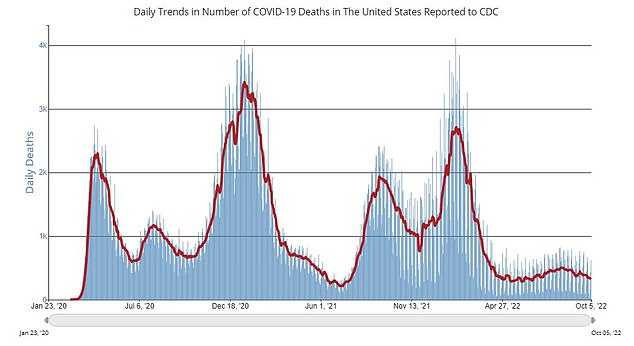 The CDC keeps track of the seven-day average number of deaths due to Covid, which is currently hovering around 330. 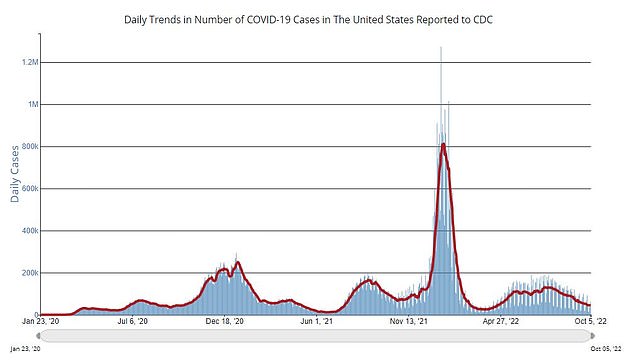 Covid case rates are nowhere near as high as they were during the winter 2021 omicron surge. The seven-day average number of new cases is roughly 44,500.

The likelihood of a winter surge is based on trends over the past two and a half years. The summer of 2021 saw a relative lull in case rates, creating a sense of security nationwide.

The summer lull was the calm before the storm that was the devastating omicron outbreak last winter.

The omicron variant was the most transmissible one recorded at the time due to an unusually high number of mutations on its genome.

What did Fauci get wrong? From telling people not to wear masks to claiming vaccines stopped infections

Dr Anthony Fauci is due to step down from his position as one of America’s top infectious disease advisors at the end of this year.

His career in public health spans decades, and includes advising the Trump and Biden Administrations on handling the Covid pandemic.

In March 2020 when concern was rising globally over Covid Fauci told Americans that there was ‘no need’ to wear a face mask.

He insisted at the time that they may only help people ‘feel a little better’, and ‘might even block a droplet’ — but would not provide good protection.

Less than a month later, however, he was forced into an embarrassing climbdown after it emerged the virus spread via droplets in the air.

Face masks were later mandated across indoor places and on public transport for more than two years as America rode out the Covid pandemic.

No states currently have the restrictions in place, but there are concerns they could return this winter.

Dr Fauci later suggested he advised people not to wear masks to ensure there were enough available for hospitals and healthcare centers.

Dr Fauci has also repeatedly insisted that Covid did not leak from a lab in China.

In April 2020 he dismissed the theory as a ‘shiny object that will go away’, and later brushed aside claims from other top experts as an ‘opinion’.

But evidence since built up that Covid may have leaked from a lab, rather than jumping from animals to humans as thought.

A US intelligence and WHO investigation have both failed to rule out the theory.

And Beijing has repeatedly frustrated attempts to access the Wuhan lab to investigate whether the virus did leak from the location.

Dr Fauci himself has also now backpedalled, saying instead that he keeps an ‘open mind’ although insisting that it remains ‘most likely’ that the virus spilled over from animals to humans.

When the Covid vaccine roll-out was in full swing, Dr Fauci told White House officials that there was little chance the double-jabbed would catch Covid.

He said the immunity from vaccines made them a ‘dead end’ for the virus, and even suggested they may no longer need to wear masks.

But when Omicron struck the US at the end of November it quickly became clear that two jabs did not block infection, although they did slash the risk of hospitalization and death.

America has now run several programs to ‘top up’ people’s immunity from jabs, including another this fall and winter.

At its peak predominance in January, omicron had accounted for nearly 1.3 million infections.

Cases and deaths have maintained downward trends since the summer. about 43,700 cases were reported daily during the week ending October 5, federal tracking shows.

The seven-day average number of deaths have hit 330, down from about 1,670 daily this time last year.

Several omicron subvariants have arisen since the surge began in December 2021. BA.5 currently accounts for more than 79 per cent of cases.

Another omicron cousin, BA.4.6 is becoming more prevalent, now making up for 13.6 per cent of cases.

The fear among infectious disease experts is that a new variant will prove capable of evading the protection conferred by vaccines, recovery from previous infection, or a combination of the two.

The BA.5 subvariant was determined to be about four times as effective at evading vaccine protection and is more likely to cause breakthrough infections than the BA.2 omicron subvariant.

But the omicron surge last winter did not result in an overwhelming wave of fatalities like that of previous surges due to a general population immunity that has been gained from vaccines and exposure to the virus.

Still, Dr Fauci said the current seven-day average number of deaths is unacceptable and must be brought down.

A new variant could become more adept at skirting the acquired immunity.

Federal officials are urging Americans 12 and older to get the new bivalent Covid booster shot that specifically targets the BA.5 subvariant.

It’s also believed to be effective against the BA.4.6 subvariant.

But booster rates are lagging as pandemic fatigue grips America. Statements like President Biden’s last month that ‘the pandemic is over’ has also undercut the vaccination campaign’s message.

Preliminary data shows that roughly 11 million Americans, only 5.3 per cent of the 215.5 million people aged 12 or older who are eligible for the bivalent booster, have received one.

SARAH VINE: As somebody who has been taking semaglutide for 2 years, I can attest to its advantages

Birth management made with compounds from LOBSTERS blocks 98% of sperm