Dr Anthony Fauci is warning of a twindemic this winter as cases of the flu surge in the US – quadrupling over the past two months – but Covid numbers falter. 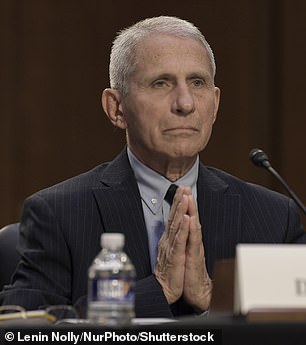 Latest official data shows there were more than 1,000 patients with flu in the week ending October 1 — up 303 per cent compared to the first week of August.

This is a vast underestimate because the US does not routinely test for influenza in the same way as Covid and many that catch the virus do not seek medical care.

Test positivity — the share of swabs for the virus that are coming back positive — has risen from 0.49 per cent to 2.5 per cent in the same time.

Dr Fauci said Monday that the nation should keep its guard up in the coming months as cases of both the flu and COVID-19 are expected to rise.

The flu largely vanished in recent years as viral interference from COVID-19 and pandemic-related restrictions and mask orders stopped its spread.

Covid cases are plummeting in the US. The nation is averaging 42,000 daily cases, dropping more than 60 per cent from the 100,000 per day average in early August. 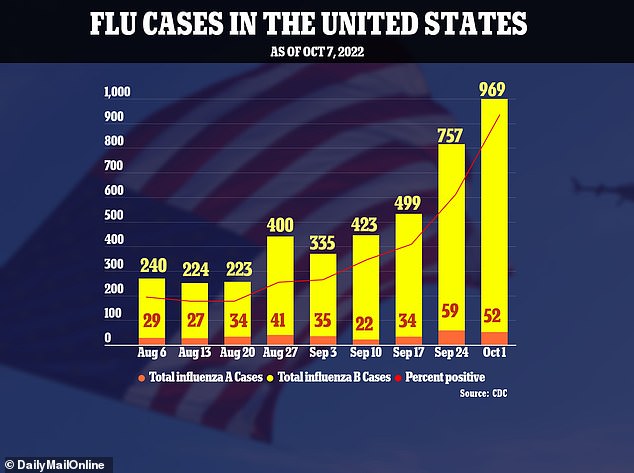 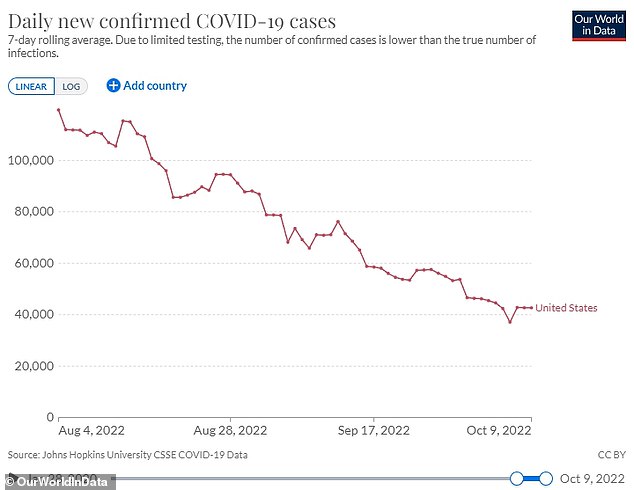 Daily Covid cases have tumbled in recent months, dropping from over 100,000 per day to 42,000 per day from August to October 9

‘We have a ways to go, particularly as we enter the winter, which will be complicated by the influenza season,’ Dr Fauci told CNN Newsroom.

‘So there’s no time, ma’am, to let down our guard right now, for certain.

‘As we get into the colder months, where any respiratory disease, COVID or anything else, always has the risk of an uptick as you enter into the late fall/winter months. … Influenza is a problem.’

As a result, many did not build up natural immunity to the virus in the past two years and have neglected getting their yearly jab

Dr Anthony Fauci, the nation’s top infectious disease expert, issued a warning about the rampant spread of the flu in the Southern Hemisphere last month

Some southern states like Texas, Georgia and New Mexico are already experiencing surges of the virus in September – before flu season even officially starts in October

Experts are on high alert about the virus after it made a resurgence in the southern hemisphere – which typically has a flu season that runs from April to October.

Dr Fauci issued a warning about the rise of the flu in the southern hemisphere nations at the end of August.

This is not the first warning of a twindemic that US officials have issued.

Many feared the flu would make an imperious return in 2021 after being near-non-existent in 2020. This was not the case, though.

An uptick of the common flu is already starting to be felt in late September, though.

The CDC reported 969 cases during the week ending on October 1, and 757 the week before.

Only 223 cases were recorded during the last full week of August, ending on August 20 – marking a massive shift in prevalence of the flu.

Hospitalizations caused by the flu, while rare, are largely among the elderly and children under-four – the groups that usually face the highest risk from the virus.

Dr Luis Ostrosky, chief of infectious diseases with UTHealth Houston and Memorial Hermann, told DailyMail.com in September that peak figures often reached in late-January were instead being detected in early fall.

‘We’re in for a rough flu season this year,’ Dr Ostrosky told DailyMail.com

‘We haven’t peaked yet. We are starting to see the numbers rise up very early.’

Dr Ostrosky says that while the twindemic may have not come in previous years, early data shows this will be the year in comes to fruition.

Less viral interference from Covid, an absence of pandemic mitigation measures and a lack of immunity in the population after little spread of the virus last year and low vaccine coverage have left Americans vulnerable to the flu this year.

While the flu returns this fall, Covid seems to be receding.

The virus has had devastating surges during the fall in winter months of recent years, but has so far failed to show any growth in September and October.

An expected summer surge, fueled by the BA.5 variant that now makes up nearly every case in the nation, failed to materialize as well.

Eye injections hailed by consultants as ‘huge step’ in preventing sight loss for 50,000 Britons a 12 months

Experimental HIV vaccine being developed by Janssen is scrapped