Demand for vasectomies in the US surged after Roe v Wade was overturned in June — as men start to take precautions now abortion is less accessible.

Clinics in parts of the country say they are seeing up to four times as many patients coming forward for the operation now compared to before the ruling in July.

Planned Parenthood of St Louis Region and Southwest Missouri performed 42 vasectomies in July 2022, compared to just ten in the same month the year prior.

The American College of Obstetricians and Gynecologists has been hearing similar reports from around the country.

Google trend data also shows surges in interest in the procedure both when a draft of the decision was leaked in early May and when it was made official next month.

Searches for vasectomies were up eight-fold during the week of May 7 compared to data a week earlier.

When the decision was officially revealed a month-and-a-half later, searches surged again.

While some men go into these procedures believing they are reversible, doctors warn that any man getting the procedure is damaging his fertility forever. 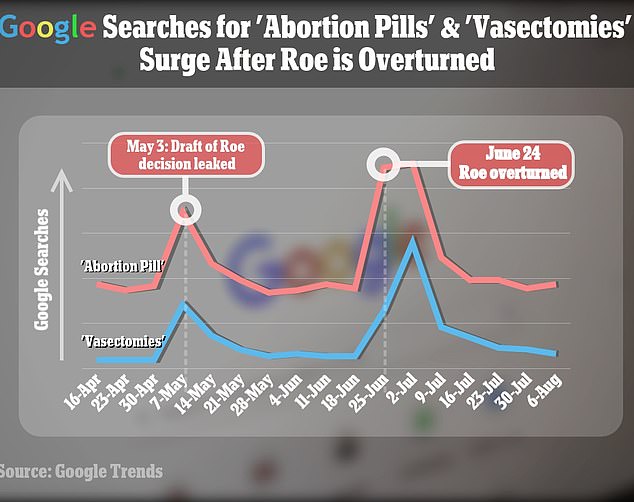 Google searches for both vasectomies and abortion pills surged after a draft for the Roe decision leaked in May, and again when the court made it official on June 24

In response to the surge in demand for vasectomies, the St Louis Planned Parenthood chapter is offering free vasectomies throughout the area next month.

Sixty vasectomies will be offered over three days in and outside Planned Parenthood clinics in St. Louis, Springfield and Joplin, Missouri to uninsured patients.

The non-profit group describes the current situation as a surge in demand for the usually over-looked procedure in fertility care. 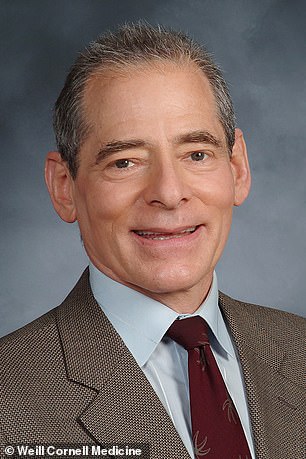 Dr Mark Goldstein (pictured), director of the Center for Male Reproductive Medicine at Cornell University, said that this type of demand is usually seen at times of financial hardship

What is a vasectomy?

Vasectomy is a procedure that stops sperm from entering the semen supply.

As a result, a man’s ejaculate will not contain the substance that allows it to impregnate a woman, making him infertile.

The procedure snips the tube that carries a man’s sperm into its semen.

It is a relatively low risk procedure and a man who receives one will usually recover within a matter of days.

While the procedure is reversible, experts consider it to be a permanent form of birth control.

Only around 90 per cent of men who want to reverse their vasectomy will be able to successfully do so.

Around 300,000 men receive a vasectomy each year. Between three and ten per cent seek to reverse the procedure.

Dr Esgar Guarin then plans to take his mobile clinic on the road the following week to offer 40 more free vasectomies in several towns across Iowa.

Dr Guarin also plans to offer discounted vasectomies that month at his regular clinic in the Des Moines area.

The efforts are part of World Vasectomy Day, originally a single-day event that now includes a year-round focus and a host of activities in November.

‘It’s a very particular moment in reproductive rights in the United States. And we need to we need to talk about it,’ he said.

A vasectomy involves cutting and sealing the tube that carries sperm, preventing it from entering ejaculate fluid. Most patients fully recover in a couple of days.

Experts say that it is too early for any national numbers for vasectomies around the country to have been gathered yet.

But anecdotal evidence from around the country shows that there has been a surge in interest in the procedure.

Planned Parenthood said it had seen a 53 per cent increase in traffic nationally to vasectomy information on its website since the Roe V Wade reversal.

Dr Philip Werthman, a Los Angeles-based urologist, reported a 300 to 400 per cent increase in consultations in the weeks following the decision to the Washington Post.

Dr Mark Goldstein, director of the Center for Male Reproductive Medicine at Cornell University, said demand for the procedure has now eclipsed demand for reversals.

‘It’s been a dramatic shift. And this [decision] is only going to further impact that in terms of increasing requests,’ he told the newspaper.

He added that similar trends were seen after the 2008 recession and at the start of the COVID-19 pandemic in 2020.

Widespread financial stress at the time of both events had many men fearing a child would lead to even more hardship.

Lawmakers are responding to the growing demand.

A California law will take effect in 2024 to make vasectomies cheaper by allowing patients with private insurance plans to get the procedure at no additional cost.

Many men believe these procedures are reversible, and could use them to put off having children until a later time in life where they are better prepared.

Around three to six per cent of of vasectomy patients – of which there are around 300,000 each year – want it reversed, studies suggest.

While they usually are, around 10 per cent of men seeking to have their fertility restored will fail to, according to research published in 2021.

Nets’ Kevin Durant on Draymond Green punch: ‘I’ve never seen that until the other day on camera’