DNA revolution ‘to save thousands of young lives’ A ‘revolutionary’ test which can quickly identify thousands of deadly diseases in babies is being rolled out on the NHS.

In a world first, doctors will use the genetic screening tool to diagnose illnesses in children from cancer to cystic fibrosis, with results within days rather than weeks.

Health experts say the simple blood test which looks for genetic faults in a patient’s DNA will speed up treatment for the seriously-ill, saving thousands of young lives every year.

Today, the head of the NHS will hail it as the start of a ‘new era of genomic medicine’. 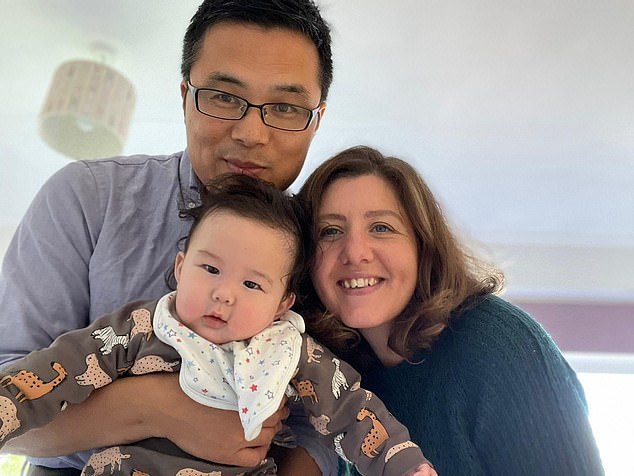 Seven-month-old Reuben, from Cheltenham, Gloucester, was saved by the service while it was being trialled in March ahead of it being offered nationally. Reuben is pictured with his father Atsushi, 32, and mother Eleanor, 38

Speaking at the inaugural genomics healthcare summit in London, Amanda Pritchard will say she has seen how ‘these simple blood tests can change the lives of babies and their families’.

‘This global first is an incredible moment for the NHS and will be revolutionary in helping us to rapidly diagnose the illnesses of thousands of seriously ill children and babies — saving countless lives in the years to come,’ she will say.

‘When a child comes to intensive care timing is everything, so finding the right diagnosis and treatment as quickly as possible is absolutely vital, and I am delighted that the pioneering work of the NHS’ Genomic Medicine Service is transforming the way we diagnose and treat patients in England.’

More than 1,200 children and babies end up in intensive care every year and up until now had to undergo extensive tests, with results often taking weeks to come back.

But the new test will be able to determine if a child has any of 6,000 genetic disorders by checking their DNA for faults.

Scientists use a process, known as whole genome sequencing, which involves extracting patient DNA from a sample of blood and running it through a machine for analysis. 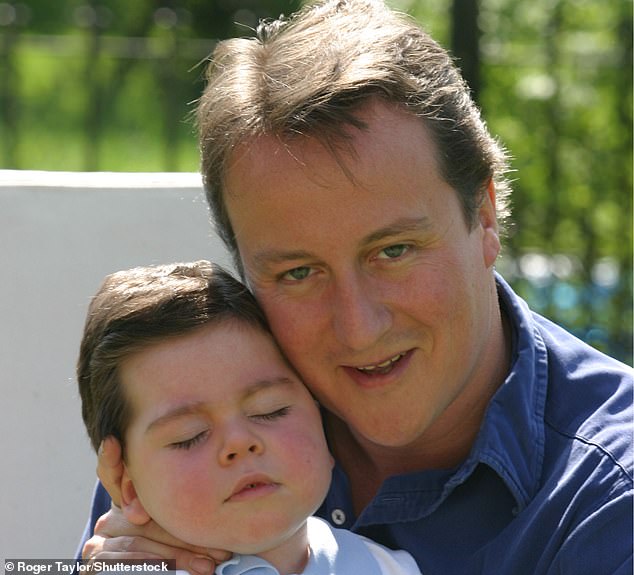 David Cameron’s eldest son, Ivan, was born in 2002. He was forced to undergo dozens of painful tests before he was eventually diagnosed with rare neurological disorder Ohtahara syndrome. The pair are pictured together

The seven-year-old boy who was saved by the service

With potentially lethal levels of ammonia in his blood, doctors faced a battle to keep Reuben Tanaka alive.

But thanks to the trial of the rapid whole genome sequencing service, a simple blood test was able to avoid an invasive and potentially dangerous liver biopsy.

Mutations in the CSP1 gene were found, meaning his body could not break down nitrogen which in turn caused toxic levels of ammonia in the blood.

Dad Atsushi, 32, said: ‘When the doctor came out and told us that they were doing everything they could keep him alive, what we were facing really dawned on us.

After he was diagnosed with the rare disorder, Reuben was quickly given life-saving medication.

He spent 2.5 months in hospital before finally going home to Cheltenham, Gloucester.

Now, seven months, he is doing well while waiting to have a liver transplant that would cure his condition.

Mum Eleanor, 38, said: ‘All the care Reuben received would not have happened as quickly and his early diagnosis meant we knew what to expect.

‘We’re so grateful for everything the NHS has done to enable this to happen and the incredible genomic testing we have had.’

Atsushi added: ‘We’re so grateful that despite the difficult times, we never felt alone and we knew we had the NHS teams with us at every step and now we look to the future with hope.’

They examine the DNA for genetic mutations, which are then checked against a database of thousands of genetic conditions – with results returned to local doctors within a week.

Around three quarters of rare genetic disorders first show signs in childhood and are responsible for almost a third of neonatal intensive care deaths.

The NHS will continue to check for nine rare conditions in all babies, by collecting drops of blood from their heels when they are a few days old.

But those who show signs of being seriously unwell can be given the new DNA test as well.

Many of the conditions can be treated or even reversed when dealt with early enough, with medics able to use tailormade drugs and treatments.

Doctors are hopeful the breakthrough will both save lives and improve the quality of countless others, with fewer invasive tests and more personalised care.

She said: ‘We know that with prompt and accurate diagnosis, conditions could be cured or better managed with the right clinical care, which would be life-altering – and potentially lifesaving – for so many seriously unwell babies and children.

‘This new service, which has been over five years in the making, is a huge step-change in what we can do for these children and their families, and it is an absolute privilege for us to play a part in helping to give children up and down the country the best care possible.’

The national rollout follows the 100,000 Genomes Project, launched by David Cameron in 2012, in memory of his son Ivan, who died in 2009 from a rare neurological disorder.

Since then, the NHS has started offering whole genome sequencing routinely for children and some adults, with certain cancers.

Successive Health Secretaries have vowed to put advances in genomics at the heart of UK healthcare, with Matt Hancock wanting all children to undergo tests as part of a genomic revolution.

But this led to ethical concerns around the storage and use of the data collected with questions over whether patients could regret learning they have or are likely to develop a terminal illness in the future.

The first NHS Genomics Strategy – a five year plan to step up the use of genomic medicine within the NHS – will be unveiled today which will include the establishment of a GMS Ethics Advisory Board to consider the introduction of new technologies, return of results, data protection and genomic research.

What IS whole genome sequencing?

Whole genome sequencing allows researchers to read all the little bits of code that make us who we are.

The human genome is composed of more than three billion pairs of building-block molecules and grouped into some 25,000 genes.

It contains the codes and instructions that tell the body how to grow and develop, but flaws in the instructions can lead to disease.

Chief medical officer Dame Sally Davies wants to set up a central genetic database within the next five years to aid research.

She said genetic testing should become as routine as an MRI scan, although patients would have the opportunity to opt out.

Pregnant girls in authorized hashish states 4 TIMES extra possible to make use of it, elevating well being dangers

Counting energy IS king with regards to reducing weight – NOT fasting, examine finds