Why are so many men, like my doctor husband, reckless about getting sunburnt? DR JUSTINE HEXALL reveals her husband gives absolutely no consideration to sun protection

By Dr Justine Hexall For The Daily Mail

Anyone observing my husband and I returning from a fortnight in France last week could have been forgiven for thinking that we’d been holidaying in different places.

While I had the same pale, white skin as at the start of our trip, Sebastian was sporting a deep mahogany tan.

In fact, whenever we get back from holiday, friends often ask: ‘Did you two actually go away together?’ Our tans — or lack of one, in my case — tell such different stories.

The thing is, we have very different attitudes to the sun. I’m a dermatologist and have devoted my life to treating and diagnosing skin cancer.

To me, the sun is the enemy. I wake up on a sunny day and think: ‘Yes, it’s nice, but this is going to do so much damage to people’s skin.’ 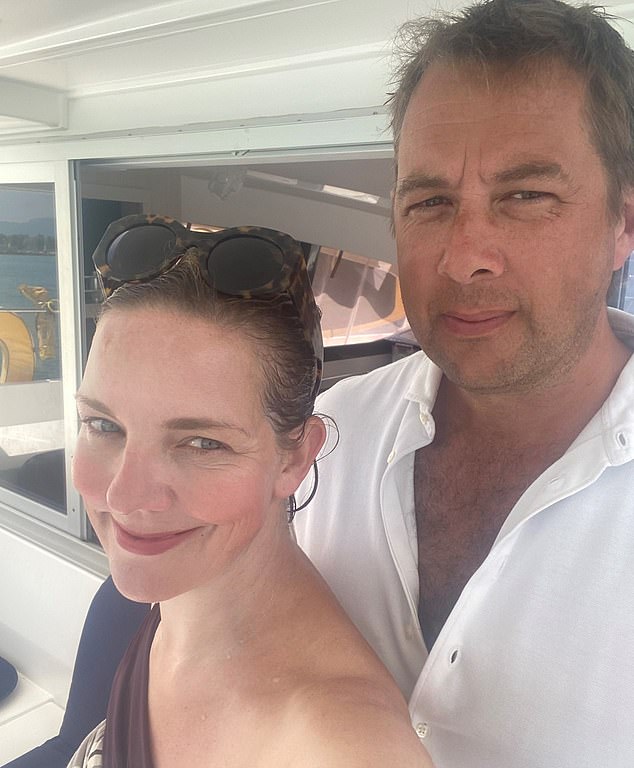 Anyone observing my husband and I returning from a fortnight in France last week could have been forgiven for thinking that we’d been holidaying in different places. While I had the same pale, white skin as at the start of our trip, Sebastian was sporting a deep mahogany tan

Even when it’s still dark outside, I never leave the house without a thick layer of factor 50. If I have make-up on, I put a layer over the top — and I do that all through the year. (I also make sure I supplement with vitamin D between October and April to ensure my lack of sun exposure doesn’t leave me deficient.)

On holiday, I’m the type who wears a factor 30 serum underneath factor 50 sun cream, and I put zinc sunblock on my nose and ears. I also wear a UV protective shirt and a Panama hat. And even then, I sit in the shade and never face the sun. I don’t want any sun on my face.

Sebastian, on the other hand, loves the sun. He says it’s good for you and being out in it gives him a boost.

On holiday, he can’t wait to get out in it. He won’t lie on a sun lounger, but he wants to get straight out on to the water. He’ll swim off into the distance or go sailing or climbing — all in blazing sunshine.

And back in the UK, when he isn’t working, he will again be out in the sun, playing cricket or sailing.

Yet despite loving the sun, and even though he is a doctor, too — in fact, an oncologist — he gives absolutely no consideration to sun protection. I’m not sure he’d consider it at all were it not for me nagging him.

Does he listen? In truth, I think I’ve said the same thing so many times over the years (we are now both 51 and got together in our 20s) that it has become like white noise.

It falls to me to make sure he doesn’t burn. I follow him with my factor 50 spray as you might a young child. And as with a child, I get ten seconds at most where he will sit still long enough for me to spray him.

Very occasionally he will wear a UV protection T-shirt — often because he can’t be bothered to apply sunscreen. I don’t think he’s ever bought sun cream in his life.

And while Sebastian loves to wear his Lock & Co Panama hat, he considers it far too nice to wear by the sea. 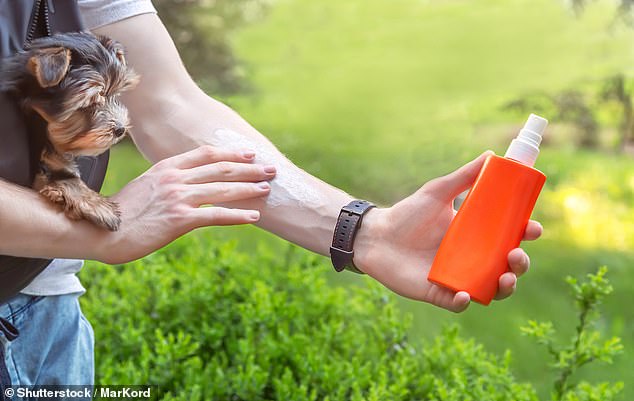 On holiday, he can’t wait to get out in it. He won’t lie on a sun lounger, but he wants to get straight out on to the water. He’ll swim off into the distance or go sailing or climbing — all in blazing sunshine. And back in the UK, when he isn’t working, he will again be out in the sun, playing cricket or sailing

Of course, this approach to sun protection isn’t failsafe and occasionally he burns. A few years ago, we went to the Caribbean in the winter. Pale, winter skin is especially prone to burning and he was on the water a lot — which intensifies the amount of damaging UV rays you are exposed to by up to 30 per cent.

He’d been out all day with no T-shirt and without re-applying sunscreen, and spent much of the next couple of days complaining about how much his burn hurt.

It’s not even that he likes the aesthetics of a tan: it’s just he doesn’t consider the dangers of the sun. This laidback attitude to the sun is part of him — but it does worry me.

I spend every working day seeing people with skin cancers — the vast majority of which (unlike many other cancers) are preventable, simply by taking steps to protect yourself in the sun.

This message is starting to get through to many women, including younger ones, and most women I see now have clearly protected their faces from the worst of the sun, although they often forget their hands, chest and neck.

But I fear this isn’t the case with men. And that’s especially true of men in their 50s and 60s, who, by the time they see me, show lots of signs of having sun damage.

There may be sun spots, areas of pigment change and, yes, sometimes skin cancer.

I often think: ‘If only I could have talked to you in your 20s, before this damage was done.’

This isn’t only anecdotal, however; it’s reflected in the figures. Take malignant melanoma — the most serious kind of skin cancer. This forms in the melanocytes, the pigment cells that give skin its colour, and often, though not always, starts in moles.

According to the latest Cancer Research UK figures, since the early 1990s cases of malignant melanoma have doubled in women — but have tripled in men.

Now, one in 47 women and one in 36 men will develop this cancer, and more than 2,000 people now die each year in this country as a result. While some cases are down to genetics, 86 per cent of these cases could be prevented.

Unfortunately, the symptoms can be very nuanced — there can be subtle changes that can be hard to spot in the early stages. In my NHS clinic, we found 18 per cent of cases are picked up by chance as I tend to give all patients a full body check for skin cancer.

For men, I typically find them on their back — a result of them walking around with no T-shirt on. Women are more likely to develop them on their legs. 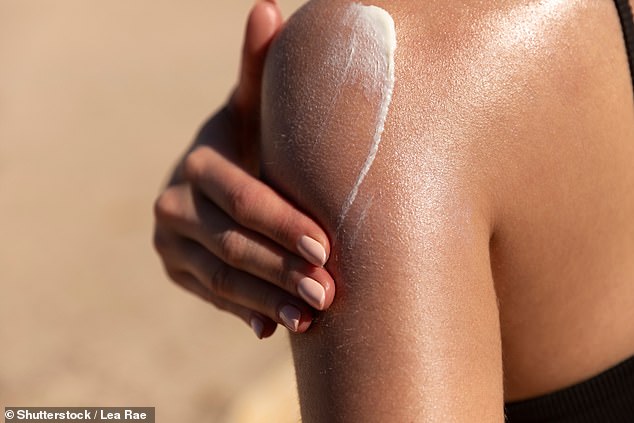 According to the latest Cancer Research UK figures, since the early 1990s cases of malignant melanoma have doubled in women — but have tripled in men. Now, one in 47 women and one in 36 men will develop this cancer, and more than 2,000 people now die each year in this country as a result

Why are men so resistant to using protection? I think it’s multifactorial.

For a start, some men take the macho view that they shouldn’t bother about their skin — or, for that matter, their health. But also, they aren’t used to wearing cream like women are — so to them it feels awkward and unnatural, especially as they have more hair on their bodies than women do.

I always advise men to use a really liquid sunscreen that rubs in easily. (So many men, like my husband, won’t make the effort to rub in a really thick cream.)

But I also think that men underestimate the risk. Sebastian thinks he doesn’t need to worry about skin cancer because he has naturally pigmented skin and looks mildly tanned even in the winter.

However, some research suggests that those with this darker skin type tend to spend long periods in the sun and this cumulative exposure may put them at increased risk of melanoma.

I think a lot of people think the same way as Sebastian.

I have always been fastidious about our children in the sun. And while our eldest, Grace, who’s 20, and our youngest, Augustus, 13, are very good at wearing sunscreen and limiting their time in the sun, Bede, who is 17 and the only one with Sebastian’s colouring, also thinks he doesn’t have to worry as much as the other two.

Another factor at play here is that people underestimate skin cancer. I think most people think that as it isn’t hidden inside them, it isn’t as sinister as some cancers.

But that patently isn’t true — and unfortunately I have lost more patients than I would like to the disease.

And while most skin cancers won’t kill you, the most common forms, basal cell carcinoma and squamous cell carcinoma, can be horribly disfiguring. I have seen people need large areas of their skin cut away in order to get rid of the cancer.

Squamous cell carcinoma forms in the outer layers of skin and often appears as crusty, sometimes tender areas of skin with an inflamed base. (It can, albeit rarely, spread elsewhere in the body.)

Both of these skin cancers occur as a result of cumulative sun damage over the years.

I would hope that such considerations would encourage everyone — both men and women — to take more care in the sun.

But there is another reason to do so — and that is because of how ageing sun exposure can be.

Early in my medical training, I spent some time in Australia, and it opened my eyes to this. More than 80 per cent of the ageing that occurs to the skin — by which I mean the development of wrinkles and the loss of elasticity — occurs as a result of sun damage.

In Australia, I met people who would look years older, sometimes decades older, than they actually were because they’d had so much sun exposure.

From then on, I’d be covered in sunscreen and wearing a long-sleeved T-shirt and hat, and I would always sit in the shade. This was 30 years ago — it wasn’t fashionable to be sun-safe then — and people would point at me and ask my friend: ‘Is she OK?’

It’s paid off, as people do sometimes comment that I look younger than I am. Sebastian, amazingly, doesn’t look too sun damaged now. It usually becomes more apparent from your 50s onwards, so time will tell.

I haven’t left the house without factor 50 since Australia. I wish more men — including my husband — would follow suit.

Dr Hextall is a consultant dermatologist at University Hospitals Sussex and the private Tarrant Street Clinic in Arundel.

As told to: Lucy Elkins

The surprising causes of head pain. This week: Cooking smells

Osmophobia, a sensitivity to smell, is experienced by 95 per cent of migraine patients, according to the American Headache Society, and is known to trigger, or worsen, headaches.

Certain smells — particularly cooking, cigarette smoke and perfume — ‘may cause stress in your olfactory nerves in the upper nasal passages’, explains Dr Andy Dowson, a headache specialist at King’s College Hospital in London. One theory is that the olfactory nerves then over-stimulate areas of the brain known to be involved in migraine, leading to the release of inflammatory substances such as CGRP (calcitonin gene-related peptide), according to an analysis of studies in the journal European Neurological Review in 2017.

Southerly states like Louisiana, Mississippi as well as Alabama called the very least healthy and balanced in the United States

EVE SIMMONS: The quack solutions being pitched by NHS midwives

Dr Michael Mosley: How to have a longer as well as much healthier life many thanks to these straightforward way of living adjustments