A national Adderall shortage has been declared across the US — after at least half a dozen drug makers said they were running out.

The Food and Drug Administration (FDA) finally acknowledged the problem following months of anecdotal reports of desperate patients rationing the drug or shopping around up to 40 pharmacies for the drugs.

Some ADHD sufferers have already signaled they considered turning to the black market, where drugs could be spiked with dangerous substances like fentanyl.

The FDA said it was assisting manufacturers with ‘anything needed’ which may include signing off on new production lines faster. It may also be looking for new suppliers for the US market.

Demand for the drugs rocketed during the pandemic when the move to telephone appointments made it easier to get prescriptions.

The drug is meant to be prescribed to treat ADHD or narcolepsy. But more and more otherwise healthy people are getting hold of the drug to help them ‘power through’ work and studying. 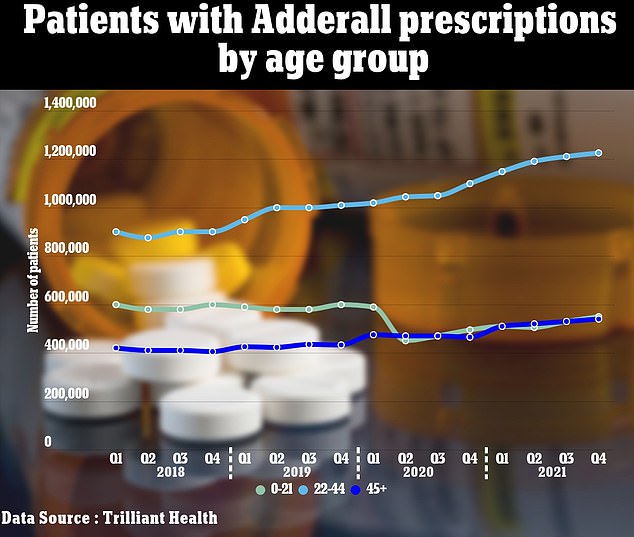 The above shows the number of prescriptions for Adderall given to age groups by year. It shows under-21s (light green), 22 to 44 year olds (light blue) and over-45s (dark blue) 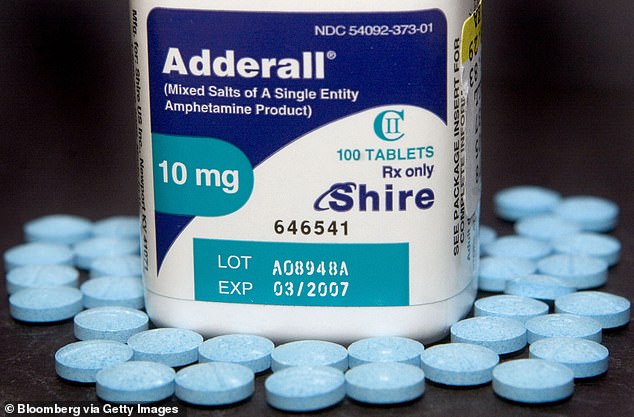 Patients have been raising concerns over Adderall shortages since August, but the FDA only recognised the shortage this week. (file image)

Adderall — a mix of four amphematimes — was heralded as a ‘game-changer’ for ADHD sufferers when it was approved in the US in 1996.

It is taken as either a fast-acting pill two to three times a day, or a slow-acting version which patients swallow once a day.

It works by boosting levels of the hormones dopamine and norephinephrine in the brain —  known as ‘feel good hormones’ — to help ease ADHD symptoms.

But coming off the drug leads to a heightened state of agitation, a slowed brain and body movements, higher appetite and unusual levels of tiredness.

It was heralded as a ‘game-changer’ when it hit the market back in 1996.

Who takes the drug?

The drug is prescribed for people who are diagnosed with ADHD.

But addiction centers say many otherwise healthy people are taking the drug to help with their work or social life.

How does it work?

It works by boosting levels of ‘feel good hormones’ dopamine and norephinephrine in the brain.

How is it taken?

It is available as a fast-acting pill, taken two to three times a day.

Or it can be taken as a long-lasting pill, taken once a day.

People who come off the drug are left in a heightened state of agitation.

They also have slowed brain and body movements, a higher appetite and unusual levels of tiredness.

Shortages of the drug were first reported by suppliers in August.

But the FDA did not raise the alarm until yesterday — with supplies expected to be disrupted until March 2023.

It says there is a shortage of the fast acting pill at present.

Teva Pharmaceuticals — believed to be the biggest US supplier — started running out last year, which it blamed on heightened demand and labor shortages at its factories.

But a sixth declared last week that it was also struggling to meet demand.

Patients are already very concerned over the shortage — and looking for alternatives.

Ian Wrobel, a 33-year-old public service worker, told Vice he had even considered turning to the black market.

The Missouri resident has been unable to fill his prescription since the end of August, leaving him relying on an ‘unholy’ amount of caffeine.

He considered using the black market for about ’30 seconds’ after visiting more than a dozen pharmacies to find none had the drug available.

Another patient told the Insider they had to visit more than 40 pharmacies before getting their prescription.

Doctors in Pennsylvania told CBS that some of their patients were trying to ration the drugs.

Declaring the shortage, the FDA said it was in ‘frequent communication’ with manufacturers.

‘Other manufacturers continue to produce amphetamine mixed salts,’ it added, ‘but there is not sufficient supply to continue to meet the US market demand through these producers’.

It suggested that patients should consider ‘alternatives’ including switching to longer-lasting Adderall.

Half of the pills manufactured by Teva — or seven out of 14 — are currently experiencing supply issues which are not expected to abate until March.

Revealing the labor shortage back in August, the company claimed: ‘We expect full recovery for all inventory orders in the coming weeks, at which point we expect no disruption at pharmacy level.’

Novartis Sandoz — the second-biggest supplier — said it was also struggling to meet demand this week but did not explain why.

Others struggling to fill orders are Alvogen, Epic Pharma, Rhodes Pharma and SpecGX.

Adderall is a schedule two drug in the US — because of the risk of addiction — meaning there are limits on production.

This has left suppliers struggling to ramp up manufacturing amid the rising prescriptions and delays at factories.

Data from companies shows prescriptions for Adderall have rocketed in the Covid pandemic.

Figures from Trilliant Health — a claims analysis site — shows among 22 to 44 year olds prescriptions rose from a million to more than 1.2million over the pandemic.

They have remained flat among those under 21 years and over 45 years old.

Statistics suggest 2.5million adults in America are prescribed stimulants like Adderall every year.

Addiction centers suggest that this is in large part because more people are seeking the pills rather than more people having ADHD.

The Lighthouse Recovery Institute in Florida blames the rise in large part on more prescriptions being handed out due to telemedicine.

They say it can help people ‘increase productivity on a stressful day’ or ‘power through studying sessions during college’.

‘Some people even use it instead of other daily stimulants, like coffee,’ they added.

But all of these higher prescriptions are leaving patients with ADHD in the lurch as they struggle to get hold of their medication.

Sam Escobar wrote in the Insider today that she had to visit over 40 pharmacies just to get hold of her standard prescription. There is no suggestion that she has ADHD.