Food study that turns our understanding of snacking on its head: Chocolate ICE CREAM is more nutritious than a granola bar, bacon is better than couscous and McDonald’s pancakes are healthier than an omelette

If you thought you were up to date with the latest science on healthy eating — think again.

US researchers have created the Food Compass which turns common assumptions about snacking on their heads.

The results are bad if you thought you were being good to your body by opting for a granola bar over sugary chocolate ice cream in a cone.

And couscous, popular among the health conscious for years, scores lower than bacon — which has previously been linked to cancer.

The team at Tufts University in Boston spent three years looking at more than 8,000 foods and drinks, from melon to a McDonald’s, and used cutting-edge science to rank them according to 54 different attributes.

They say they have created the most comprehensive system to date to assess the nutrition content of what we eat.

As it stands, food labelling in the UK and US highlights calories, fat sugar and salt. But scientists say this only takes into account a handful of ingredients and ignores important ones.

The Tufts researchers developed a scoring system which considers how healthy foods are across nine metrics — including ingredients, additives and protein.

As expected, sweet deserts and fizzy drinks scored extremely low — while nutrient-packed fruit, vegetables and nuts scored achieved some of the highest scores.

But there are some very unexpected results. Take a cheese and ham omelette, for example. With healthy fats and proteins from eggs and meat, you’d be forgiven for thinking it is a great breakfast choice.

According to this chart, it scores a measly 26 points — while pancakes from a fast food restaurant get a whopping 50 points.

MailOnline looked at some of the other most surprising findings: 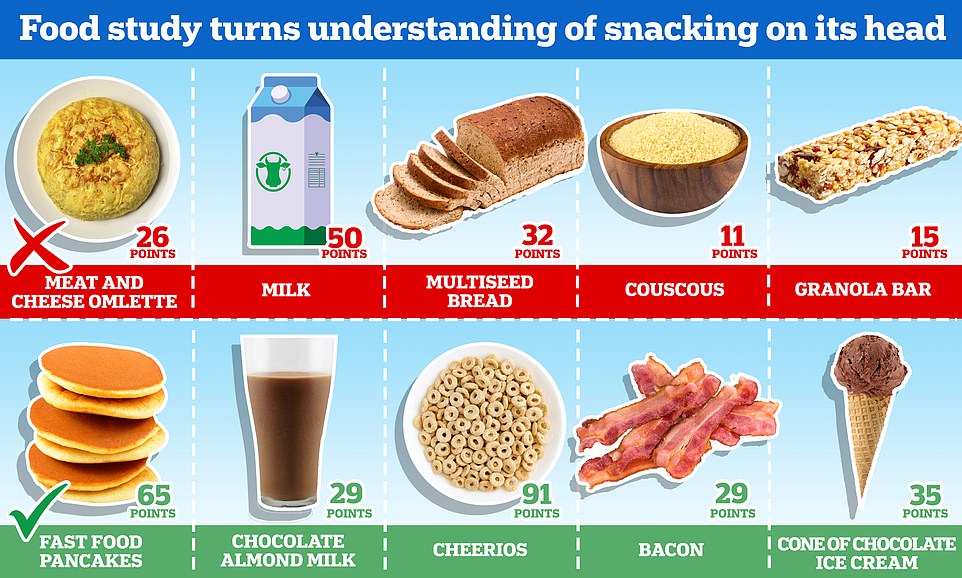 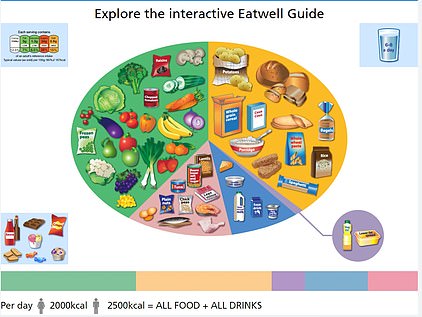 Meals should be based on potatoes, bread, rice, pasta or other starchy carbohydrates, ideally wholegrain, according to the NHS

• Base meals on potatoes, bread, rice, pasta or other starchy carbohydrates, ideally wholegrain

• 30 grams of fibre a day: This is the same as eating all of the following: 5 portions of fruit and vegetables, 2 whole-wheat cereal biscuits, 2 thick slices of wholemeal bread and large baked potato with the skin on

• Eat some beans, pulses, fish, eggs, meat and other proteins (including 2 portions of fish every week, one of which should be oily)

• Choose unsaturated oils and spreads and consuming in small amounts

When choosing what side to have with a main meal, many would assume that rice was a healthier option than fries.

But the Food Compass shows that fries get eight times more points than white rice.

While rice is the central food in many cuisines, white rice has had the inner and outer parts of the grain removed — both of which are packed with nutrients.

This process makes it quicker to cook than wholegrain rice but makes it less valuable. It has also been linked with high blood sugar levels and weight gain.

But the refined carbohydrate is easy on the digestive system for those with stomach issues and are also a source of quick energy, especially after exercise.

But the researchers gave white rice that is made with margarine just eight points, while chips gained 64.

However, they defined chips as freshly prepared potatoes that are fried. While they don’t count towards one of your five a day, potatoes are rich in iron, fibre and potassium.

This has led some researchers to say you can eat French fries daily — although they recommended it was best to get a variety of vegetables and potatoes.

Those stuck in an afternoon lull and seeking sugar may assume that a granola bar would be a healthier option than ice cream.

But the Food Compass suggests otherwise, with a coconut and chocolate granola bar getting just 15 points.

Meanwhile, chocolate ice cream in a cone with nuts clocked up more than twice as many — 35 points.

Experts have long warned that cereal and granola bars can be packed with fat, sugar and salt and low in fibre and protein, despite often masquerading as a healthy snack.

While many may assume an ice cream cone offers no health benefits, the dairy-rich sweet treat is packed with calcium.

And when one scoop is served in a cone — which can have as little as 15 calories — and topped with nuts, it becomes a snack that is not too bad when consumed in moderation. The added nuts provide healthy fats and vitamins.

Professor Mozaffarian told MailOnline that the granola bar is made from ‘mostly refined starch and sugar’ while the ice cream has protein and nutrients from dairy.

In recent years, a huge variety of healthy savoury treats have hit supermarket shelves as people shun traditional crisps (chips) over fear of salt and oil.

But the Food Compass suggests that not all swaps may be beneficial.

Those trading a packed of lightly salted for multigrain crackers are getting less than half the nutritional benefit, it suggests (22 points vs 56 points).

While both items have around the same calories and salt, crackers often contain more fat and sugar.

An omellete for breakfast one of the favourites among professional athletes and gymgoers.

They’re packed with protein, vitamin D and vitamin B12, which many struggle to get into their diets. And yolks are full of healthy fats.

However, a meat and cheese omelette gets just 26 points on the new Food Compass.

And ‘wholegrain fast food pancakes’, often deemed as empty calories due to their lack of nutrition, scored 50 points.

For example, McDonald’s pancakes with syrup contain 477 calories and a huge 41g of sugar and 1.5g of salt.

However, they do contain 10g of protein.

Professor Dariush Mozaffarian, a nutrition expert and study co-author, told MailOnline that the whole grains in the pancakes offset the negatives, giving them a higher food score. 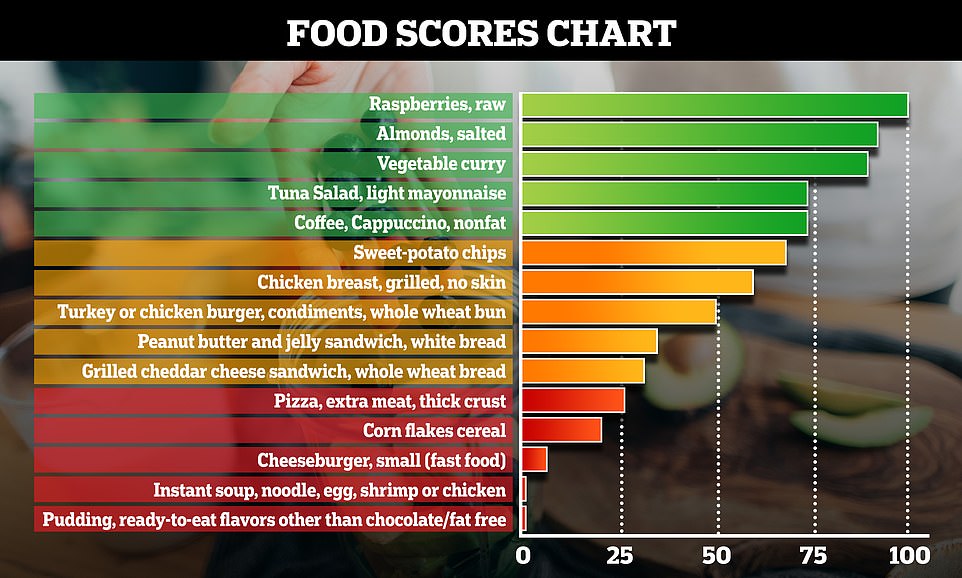 Food Compass scoring system: Examples of the best and worse

Food Compass Nutrient Profiling System claims to give a better picture of which food and drinks are healthy compared to other systems.

The method is to assess foods by 54 aspects as they relate to human health both positively and negatively, and come up with a total score.

The system advises consuming food and drink that scores over 70 frequently, over 31 moderately, and under 30 in moderation.

Many will be surprised to learn regular milk scores much lower than chocolate almond milk.

The dairy version provides essential nutrients, such as calcium, protein and vitamin B12.

But it gets a measly score of 50 points on the food scale.

This may be because it contains saturated fat and cholesterol which, in excess over time, can harm the heart.

As well as being naturally dairy free and vegan, it is also low in calories — a 200ml glass has around 30 calories, compared to 100 for the same amount of traditional milk.

While milk alternatives naturally lack in some of nutrients found in the original version, almonds are a good source of vitamin E, which maintains healthy skin and eyes.

They are also often fortified with calcium, vitamin D and vitamin B12.

Toast is another popular option to start the day and most would think that a multi-seed bread would be packed added benefits.

But the Food Compass gives it just 32 points. This may be due to the high-fat nature of seeds or because bread often has added salt.

However, cheerios scores a massive 91 points. The breakfast cereal is full of wholegrains and doesn’t have much added sugar, so it doesn’t lose many points, the study authors said.

While they might look similar, other cereal like Kellogg’s Coco Pops (24), Corn Flakes (17), Frosted Flakes (13) are far more unhealthy, according to the Tufts researchers. These options are packed with added sugar and salt.

Couscous may be perceived by some as one of the biggest health foods going.

While those opting for couscous for lunch may think their meal has a so-called health halo, the points system deems it to be in the lowest tenth (11 points).

The grain is not dissimilar from pasta, so is high in simple carbohydrates. These are broken down into sugar during digestion, which causes blood sugar to spike.

Couscous also contains few nutrients. So while it may be good as a base for vegetables and lean meat, on it’s own, it doesn’t perform well.

Meanwhile, bacon clocks up 29 points — nearly three times as many.

The red meat is recommended only in moderation due to its high-fat nature and the preservatives used in the manufacturing being linked with cancer.

But it also has some essential micronutrients, such as potassium, magnesium and iron, that support bone, heart and muscle health, respectively.

Those looking for a light and healthy supper may be tempted to run to a can of vegetable soup. It clocks up 58 points on the food compass, so isn’t ranked badly. But chicken curry does better at 65 points.

While tinned soups can be low in calories, the nutritional content can drop dramatically if it is heavily processed and packed with salt.

Meanwhile, chicken is one of the healthiest meats — being high in protein and rich in vitamins and minerals that support bone and muscle health. And a well-made sauce can include vegetables and spices that bring further health benefits.

While coffee purists may assume a shot of espresso is healthier than a milky coffee, the Food Compass suggests otherwise.

While an espresso is given 55 points, it isn’t the best choice. The healthier option is a skimmed milk cappuccino (73). It has some protein and, unlike the full-fat version (58), not too many saturated fats.

Skimmed milk also adds calcium to the morning cup of Joe, which is essential for bone and teeth health.

While neither pizza or instant noodles are healthy options, the Food Compass gives them vastly different scores.

Instant noodles with egg and shrimp or chicken gets a measly one point, while a think crust pizza with extra meat is granted 33, more than an omelette, cereal and white rice.

While the researchers do not explain this discrepancy, dried and preserved packet food like instant noodles are known to be so heavily processed that they can contain none of the benefits of the fresh version of the same meal.

Professor Mozaffarian told MailOnline that the soup is mostly made from salt, broth, processed noodles and ‘little actual egg, shrimp or chicken’.

And while pizza is recommended as an occasional treat, cheese offers calcium, vitamin D and zinc which boost bone health and reduce inflammation, while added meat provides iron and protein.

Most snackers may assume that there is little difference between the sugar-based sweet treats they eat.

But the Food Compass suggests that not all are made equal.

While M&M’s Almond Chocolate Candies gain 40 points, a Milky Way bar is given just one.

Milky Way bars have fewer calories (97 vs 220) and sugar (13g vs 21g) per serving. But the M&M option is an almond, dipped in chocolate and encased in a sugar shell.

As the nut is the main ingredient, snackers will get magnesium, vitamin E and fibre from the sugary food, rather than just empty calories from Milky Way bars.

LIV Golf: Tiger Woods ‘to meet with influential PGA Tour members who have not joined LIV’

Exposed: Drinking a glass of milk and also consuming a yoghurt on a daily basis ‘might aid fend off kind 2 diabetes mellitus’