Girls with brothers are no more likely to grow up as ‘tomboys’, study finds

Scientists have rubbished the theory that a child’s personality is influenced by the gender of their siblings.

Many think that children who grow up around multiple siblings of the opposite sex are influenced by them in terms of personality well into adulthood.

But a new study suggests this way of thinking is a misconception – and that sibling gender ‘does not systematically affect personality’. 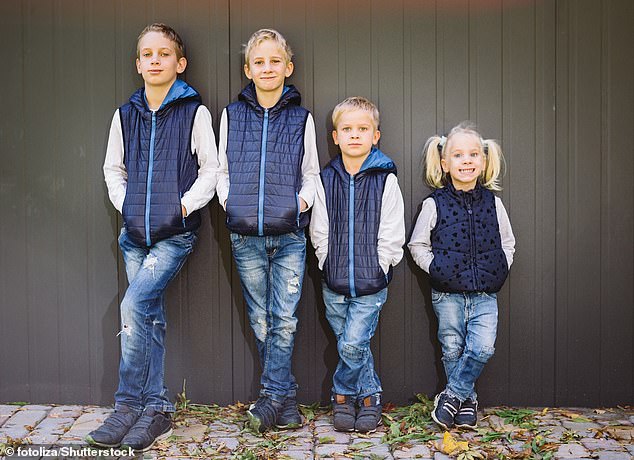 Our personality as adults is not determined by whether we grow up with sisters or brothers, the new study claims. So girls with multiple brothers no more likely to grow up as ‘tomboys’ (file photo)

Many think that children who grow up around multiple siblings of the opposite sex are influenced by them in terms of personality.

The ‘social learning’ theory states that siblings learn from each other and assimilate to each other through social interactions.

From this, it follows that children with an opposite-gender sibling will have fewer gender-stereotypical characteristics compared with those with a same-gender sibling.

The new study was conducted by researchers from Leipzig University, the University of Zurich and Victoria University of Wellington, New Zealand and published in Psychological Science.

‘Our findings refute the idea that growing up with brothers or sisters causes us to develop certain personality traits in the long term that are considered “typically female” or “typically male” in a society,’ said study author Dr Julia Rohrer.

‘Overall, current research suggests that siblings have a surprisingly small impact on personality in adulthood.’

The researchers analysed data from more than 80,000 adults from nine countries, including the UK, the US, Germany, Australia, Mexico and China.

They used national longitudinal studies that systematically collect information about people over decades, including their living conditions, personality traits and sibling genders.

They investigated the following personality traits: trust, patience, ‘risk tolerance’ (the amount of risk they can take) and ‘locus of control’ (if they feel they have control over the outcome of events in their lives).

The ‘big five’ personality traits are the best accepted and most commonly used model of personality in academic psychology.

In addition, the researchers looked at something called a typical female personality (TFP) index, which was generated using five personality traits for which they observed ‘systematic gender differences’.

Statistical analysis of this data showed across national borders that the personality traits are not systematically related to sibling gender.

Therefore, personality as adults is not determined by whether we grow up with sisters or brothers, they claim.

However, the results of the new study do not mean that sibling gender does not play a role at all in long-term life paths. 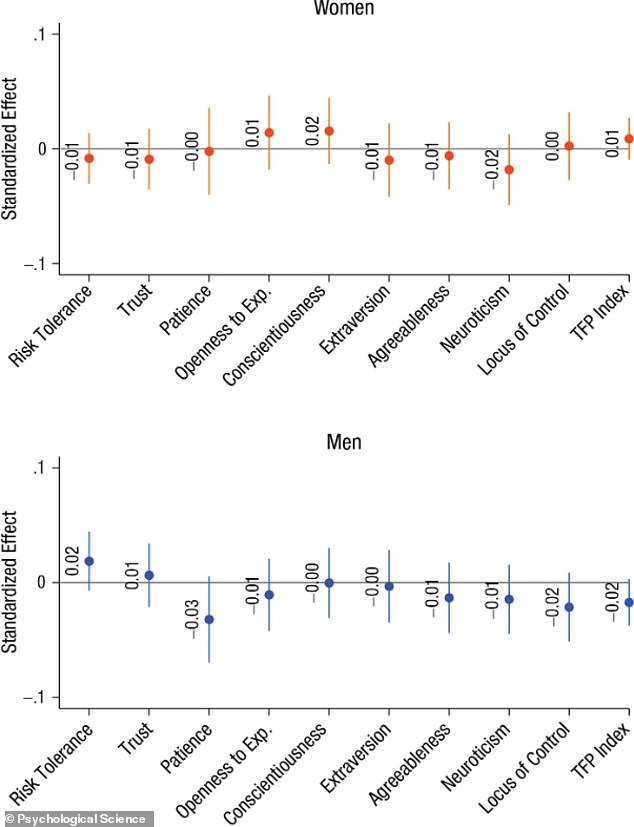 Across all surveys, researchers found that the gender of the next younger sibling has no meaningful effects on women’s or men’s personality (risk tolerance, trust, patience, openness to experience, conscientiousness, extraversion, agreeableness, neuroticism, locus of control, and the TFP index. Pictured, the effect of having a next younger sister (as opposed to a younger brother) on an older sibling’s personality

Economic studies have shown that in the US and Denmark, women with brothers earn less when employed.

‘So there do seem to be some interesting dynamics here that are related to gender, but personality is probably not part of the explanation for such effects,’ said Dr Rohrer.

Previous studies by Dr Rohrer and colleagues also show that sibling position – that is, whether a person is a firstborn, lastborn or a middle-born ‘sandwich child’ – also does not play a major role in personality.

Their 2015 study found who we become only marginally correlates with our birth position amongst siblings.

According to public perception, firstborns are supposedly perfectionists, while middle children develop a talent for diplomacy and last-borns are expected to be rebellious.

OLDEST SIBLINGS ARE MORE LIKELY TO BE OBESE, STUDY CLAIMS

Younger sisters are more likely to be slimmer than firstborn girl, a 2015 study found – suggesting birth order may play an important role in determining weight.

And the international team of study authors warned that firstborns could be at risk of other health problems too.

The findings back up similar research on men that found firstborn males were more likely to be overweight than younger brothers.

The 2015 research examined data from pregnant Swedish women, gathered between 1991 and 2009. Weighed when they were between ten and 12 weeks pregnant, firstborn women were 1lb 4oz heavier on average than second-born sisters.

This meant their body mass index (BMI) was 2.4 per cent higher. Firstborn sisters were only negligibly taller, measuring an additional 1.2mm on average.

The researchers also noted a considerable increase in average weight over the 18-year period, rising by four ounces per year.

The experts, from the University of Auckland in New Zealand and Uppsala University in Sweden, said it was unclear why older sisters seemed to be heavier. But they said the findings could explain why obesity figures appear to be soaring.

Since families are shrinking, with fewer parents having more than two children, a greater proportion of people today are firstborns than in the past. So if firstborns are more likely to be overweight, that will push up obesity rates.

The scientists also said there is mounting evidence that firstborns are more at risk of health problems such as diabetes and high blood pressure in later life than their siblings. But the underlying causes for these differences are far from clear, they added.

Writing in the Journal of Epidemiology and Community Health, the team said: ‘Our study corroborates other large studies on men, as we showed firstborn women have greater BMI and are more likely to be overweight or obese than their second-born sisters.

Broadcaster Joan Bakewell opens up about colon most cancers analysis, picked up throughout routine examine

My coronary heart fee is 100 beats a minute once I get up. Would an ablation assist? DR MARTIN SCURR solutions