Why it really IS important to get your daily steps in: Study finds getting at least 8k a day cuts risk of high blood pressure, sleep apnoea and depression

By Xantha Leatham Deputy Science Editor For The Daily Mail

Some days it can feel all too easy to stay in bed or lounge on the sofa.

But meeting your daily step goal really does work to prevent important illnesses, according to new research.

A team from Vanderbilt University Medical Centre asked more than 6,000 participants to wear Fitbit activity trackers for at least 10 hours a day.

The study lasted four years and during this time participants’ health records were also recorded. 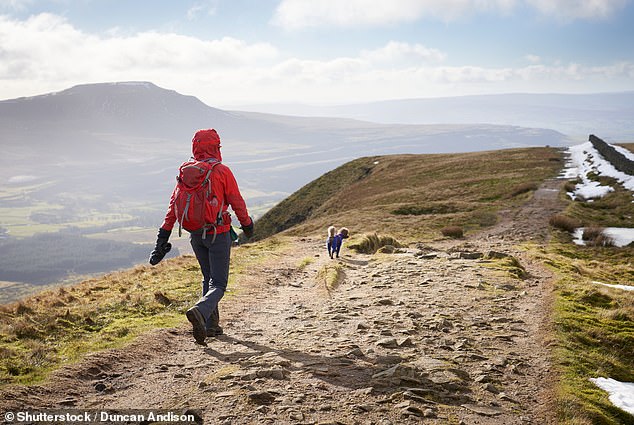 A team from Vanderbilt University Medical Centre asked more than 6,000 participants to wear Fitbit activity trackers for at least 10 hours a day

Analysis revealed taking more than 8,200 steps a day – the equivalent of walking around four miles – was found to protect against the likes of obesity, sleep apnoea, high blood pressure and major depressive disorder.

The results also suggested that overweight individuals can reduce their risk of becoming obese by 64 per cent if they increased their daily steps from 6,000 to 11,000.

As the number of steps increased, risk declined for most conditions.

However the risk of hypertension and diabetes did not decline further after participants reached around 8,000-9,000 steps per day.

The authors said people who wear Fitbits tend to be more active than the average adult.

Yet ‘the fact that we were able to detect robust associations between steps and…disease in this active sample suggests even stronger associations may exist in a more sedentary population’.

The team said their findings provide a necessary first step toward the development of personalised activity prescriptions.

Writing in the journal Nature Medicine, they said: ‘We examined the association between step count volume and intensity across the entire spectrum of human disease using commercial activity monitors linked to an individual’s electronic health records.

‘Taking more steps each day was related to lower risk of developing these chronic diseases.

‘Higher step counts were associated with protection from obesity in a high-risk population.’

Polls suggest more than a quarter of UK adults now own an exercise tracker of some kind, with a third of those in possession using theirs every single day.

Figures are similar in the US.

In this study, the data showed that participants took on average 7,731 steps per day.

In 2018 Public Health England and the Royal College of GPs said people should focus on walking briskly rather than just counting steps to improve their health.

As part of a push to get adults doing more moderate intensity physical activity, they said just 10 minutes of brisk walking a day could reduce their risk of early death by up to 15 per cent.

HOW MUCH EXERCISE YOU NEED, ACCORDING TO THE NHS

To stay healthy, adults aged 19 to 64 should try to be active daily and should do:

A good rule is that 1 minute of vigorous activity provides the same health benefits as 2 minutes of moderate activity.

One way to do your recommended 150 minutes of weekly physical activity is to do 30 minutes on 5 days every week.

All adults should also break up long periods of sitting with light activity.

Do you understand the place the clitoris is? Try this interactive quiz