The gadgets, sold for £3 online, constrict flesh around the penis — trapping blood in the genitals.

This can help men maintain erections for longer, with some also claiming the devices make their penis bigger sand enhance sexual pleasure.

But the rings don’t come without risk. They can get stuck — effectively strangling the penis.

Apart from an embarrassing trip to A&E, this can also cause parts of the penis to die from a lack of oxygen if they are not treated quickly enough. In rare cases, men can need their member amputated.

Metal rings have less elasticity — which is why they’re more likely to get stuck.

In comparison, rings made of less robust material, like rubber, can be cut off easily in an emergency.

Medics have been forced to use drills directly on men’s genitals in an attempt to cut off metal rings and release their vice-like grip.

In one horrifying clip circulating online, medics resort to using an angle grinder and then bolt cutters to sever a metal penis ring from his genital.

The man’s dangerously engorged member appears to have escaped unscathed from the heavy-duty machinery used to free it.

WHAT IS PENILE RING ENTRAPMENT?

Penile ring entrapment is a rare but often dangerous urological emergency that could cause mechanical and vascular complications.

According to medics, a prolonged entrapment of more than 30 minutes could lead to irreversible damage.

They have devised a grading system to indicate the severity of penile ring entrapment:

‘Made for purpose penile constriction rings will always have an elastic quality to them,’ he said. ‘This allows for their ease of deployment and removal.

‘Non-elastic materials such as metal or hard plastics should be avoided.

‘The danger with these is that they will interfere with the natural drainage of blood from the erect penis in such a way that it swells excessively beyond the ring.’

This, he explained, could then make it impossible to remove the ring by hand, with the parts of the penis past the ring then starting to die off due a lack of fresh blood.

Dr Viney added that even the removal of such hard rings wasn’t without risk, due to the heavy duty equipment needed to cut through them.

‘The emergency removal of such rings are very challenging and not without risk of significant penile injury,’ he said.

‘These complications can span from minor, such as trauma to the skin and the subcutaneous tissues to major, such as loss of the penis following strangulation by the ring,’ he said.

He added this was particularly the case for ones made of materials like metal.

‘Certainly rings made of non elastic materials are more likely to cause problems, as if they get stuck at the base of the penis, are more difficult to be removed,’ he said.

‘In my 20 years experience in this field I have encountered a number of patients attending A&E with a penis strangulated by a metal ring where a metal cutting tool was required to free their penis.

‘It was not uncommon for these patients to experience a degree of permanent damage to the penis and in some cases to loose the penis completely or need extensive reconstructive surgery.’

Online retailers like Amazon, eBay and Etsy sell dozens of toy rings, made of a variety of materials. 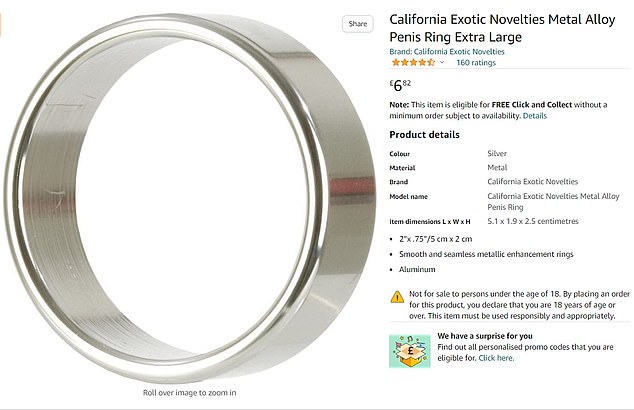 Online retailers have dozens of metal penis rings online with some like this one from Amazon selling for just £6.82 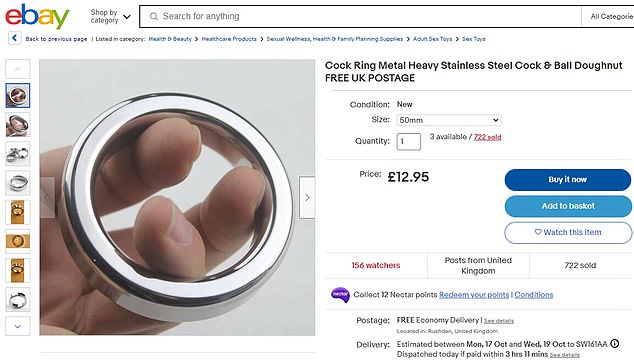 Stainless steel versions — sold in an array of different sizes — can go for as little as £3.29, and be up to 2 inches in diameter.

Ads brag that they are ‘great for extending the duration of your erection’ and ‘help you last longer in bed’.

Others promise to enhance the pleasure of both men and their partners, by providing ‘more intense orgasms’ and ‘stimulation’.

Popular sex shops, such as LoveHoney, also sell their own versions, some of which advise men to slip their testicles through.

Experts warned this is particularly dangerous, however, because it can cause the testicles to be strangled, too.

Dr Viney said there was no urological reason to put testicles past the ring because it wouldn’t help maintain an erection.

‘This show boating is purely down to personal preference,’ he said.

‘But if a metal ring is used in this setting, it’s not only the penis that is at risk but the testicles are also in jeopardy.’

Professor Garaffa said there was case for the sale of metal penis rings to be banned over the potential dangers.

‘There is an argument for non elastic rings such as the metal ones to be banned, as the risk of causing damage to the penis and/or the testicles are higher when compared to rings that can stretch and can therefore be more easily removed in case of strangulation,’ he said.

Men often use penis rings ‘to sustain’ an erection.

However, prolonged entrapment of more than 30 minutes could lead to irreversible damage, experts warn.

Keeping the ring on for too long — also known as penile strangulation — can lead to gangrene, when body tissue turns black and dies.

In the most extreme cases, amputation may be needed.

Each case of penis ring entrapment is unique due to the difference in where the ring has been placed on the penis, the material it is made of and how long the patient has been wearing it.

Some cases involve ‘home-made’ penis rings which can further complicate the situation. 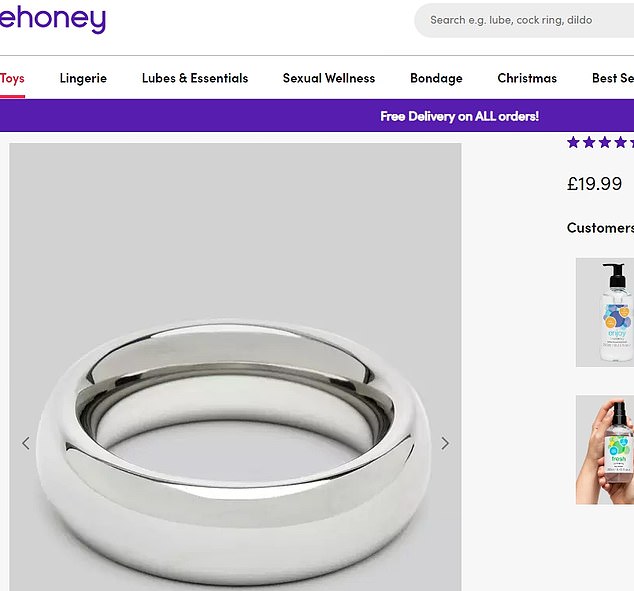 This metal penis ring, sold by adult toy seller Lovehoney is also designed to go past the testicles, a type that sexual health experts warn doesn’t noting to address impotency and risks damaging the testes 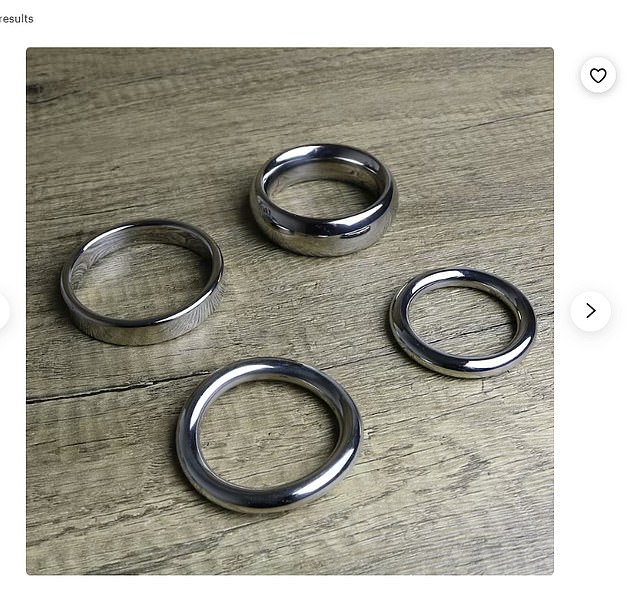 Another key factor is how long a patient waits before going to A&E and any potential damage from attempts to pry themselves loose without proper medical training.

There have been cases where men have waited several hours before seeking medical attention due to embarrassment or shame, which has led to a poorer outcome than if they rushed to an emergency department.

While there is no official record of the number of penis rings incidents, official NHS data shows there were 13 emergency penis amputations performed in England between April 1, 2021 and March 31 this year.

Penis rings made of softer more flexible material are generally considered safer by sexual health experts, because they can stretch compared to their metal counterparts.

This reduces the risk of the penis or testicles suffering a dangerous restriction in blood flow and they are also easier to cut free in an emergency.

Dr Viney said penis rings can be helpful to men suffering from erectile dysfunction alongside other treatments.

But he urged men to talk to their GP first, not only for safety, but because a change in erectile function can also be sign of diabetes, heart disease, or prostate cancer.

‘Good quality and fit for purpose rings are easily available online and are not expensive,’ he said.

‘Please avoid the urge to use a metal curtain pole ring or something similar as the results can be catastrophic.’

Professor Garaffa agreed that men suffering from erectile dysfunction should talk to medical professional rather than attempt to self-medicate with a penis ring.

‘There are many solutions available for the management of erectile dysfunction that are more effective than the penis ring,’ he said.

An Amazon spokesperson said safety was important to the company and that all products offered on its website are required to comply with applicable laws and regulations.

MailOnline approached LoveHoney, eBay and Etsy for comment but did not receive a response.