NHS nurses unhappy with their pay are free to leave, Thérèse Coffey has claimed as the threat of devastating strikes inch closer.

The Health Secretary has already said the Government will not cough up extra cash to prevent the first ever UK-wide nursing walk-out.

Doubling down on her position with another explosive jibe, Dr Coffey said No10 has ‘already’ helped the public cope with the cost-of-living crisis. She added that nurses have also been offered £1,400, in reality.

Union bosses are demanding nurses get a salary uplift of at least five per cent above inflation, which currently sits at 12.3 per cent.

This would grant the average nurse, who earns roughly £35,600 each year according to the Government, an extra £6,150. But bowing to the union could cost taxpayers an extra £1billion.

When asked about British nurses leaving the UK to places such as Australia in search of better pay, Dr Coffey told the Evening Standard they are welcome to go and that the UK can recruit more from overseas.

‘It is their choice of course if they want to do that,’ she added. ‘But then we also have an open route for people to come into this country who are professional staff.’

Last week the Royal College of Nursing (RCN) began balloting its 300,000 members working in the NHS, urging them to vote for strike action for the first time in its 106-year history. 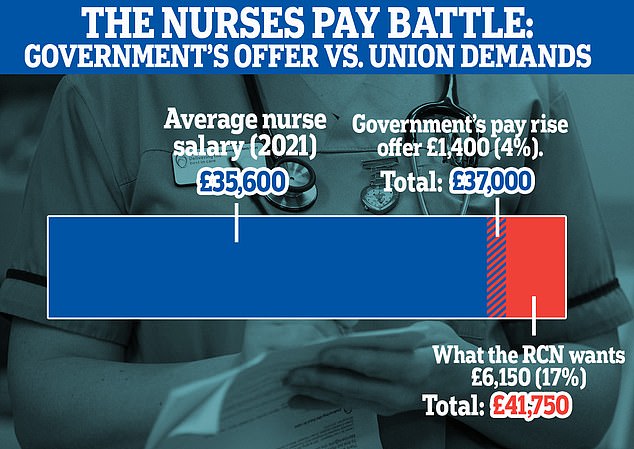 The Royal College of Nurses wants nurses to get a pay rise 5 per cent above inflation, far above the around 4 per cent being offered by No10 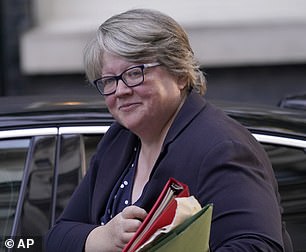 WHAT PARTS OF THE NHS COULD STRIKE?

The Royal College of Nursing (RCN) is urging its 300,000-plus members to vote in favour of strike action when ballots open next month.

The chair of the British Medical Association has warned strike action is ‘inevitable’.

The Royal College of Midwives will put putting industrial action to a vote to its 50,000 members.

Two-thirds have already said they would be willing to strike in a preliminary poll.

The Chartered Society of Physiotherapy (CSP) said more than eight in 10 of its 60,000 members are prepared to strike.

Members will be balloted for the first time in the CSP’s 100-year history over pay.

‘The Government has intervened in a number of different ways to help with the cost of living,’ Dr Coffey said.

‘There was already a package focused on helping people on low incomes and we’ve enhanced with the energy price guarantee.’

The RCN has repeatedly argued that higher wages are needed to stop thousands of nurses leaving the NHS for better paid work, as well as address record staffing shortages.

While the NHS has used international recruitment to shore up nursing numbers for decades, experts have warned the UK is now over-reliant on sourcing nurses from overseas.

Data from the British nurse regulator, the Nursing and Midwifery Council (NMC) who nurses must register with to work in the UK, shows the number of international recruits has skyrocketed in the last five years.

From April 2021 to March this year, 23,367 internationally-trained nurses joined the NMC.

Shockingly, the number of international nursing recruits is now almost reaching parity with the number of British trained joiners for the first time.

Between April 2021 and March this year, 25,028 British trained nurses joined the NMC nursing register for the first time, just 2,000 above their internationally trained colleagues.

But experts warm this seemingly bottomless well of recruitment is starting to run dry.

They estimate there will be a global shortage of 13million nurses by 2030, with levels particularly short in South East Asia and Africa, two of the UK’s biggest areas for nursing recruitment.

UK international nursing recruitment goals could also be scuttled by the crumbling pound, with Britain’s currency having recently tumbled on the international stage as part of the economic fallout from Liz Truss Government’s ‘mini-budget’.

Many internationally trained nurses send some of the money they earn back to family members, meaning how much their salary is worth when converted to their native currency can be critically important to tempting them to the UK.

A record 40,000 nurses left the NHS in the past year — one in nine of the workforce, according to research by the Nuffield Trust.

Health leaders have warned that staff are resigning in order to earn better wages in pubs, restaurants and coffee shops to cope with the cost-of-living crisis.

Earlier this year hospitals were forced to set up food banks and voucher programmes to help healthcare workers who cannot afford rent, fuel or food. 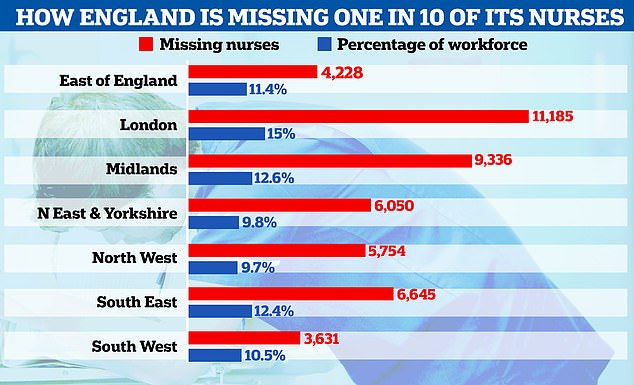 The latest NHS data recorded that about 45,000 nursing posts in England are vacant as of the end of June. London has highest percentage missing, with 15 per cent of nursing posts unfilled 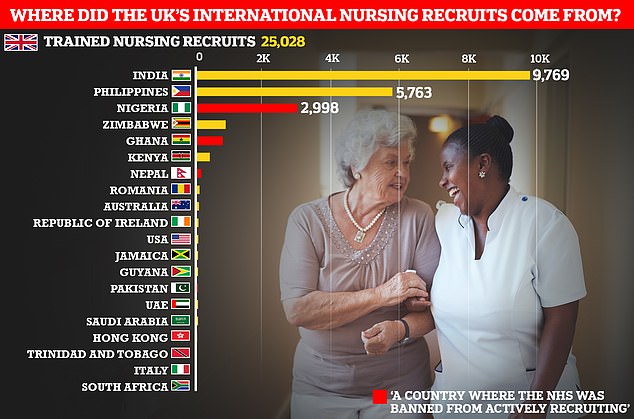 India and the Philippines account for the lion’s share of international nurse recruits for 2021-22 but a fifth came from ‘red listed’ countries where the NHS is banned from actively poaching nurses. These were Nigeria, Ghana, Nepal, and Pakistan. This data, from the UK’s Nursing and Midwifery Council, covers the period before Britain struck a special deal with Nepal to allow the NHS to recruit nurses from the country 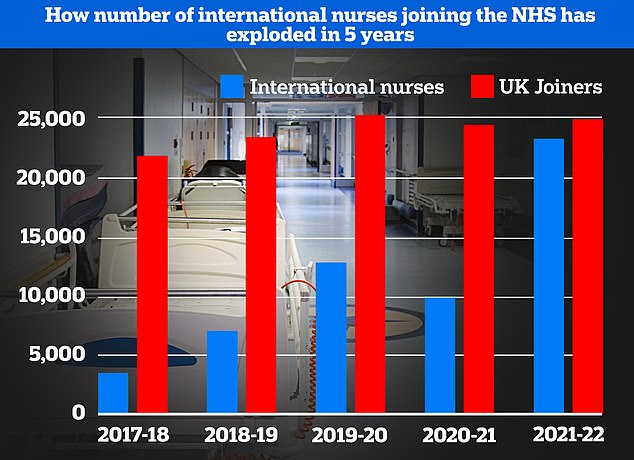 As with other workers, nurses cannot legally be sacked if they participate in official and lawful industrial action.

However, unlike other sectors, some nursing staff will continue to work.

This is carefully negotiated with NHS bosses before the strike takes place to ensure patient safety.

For example, an entire service — such as an intensive care unit or night duty — may be exempt from the industrial action and continue working.

The specific exemptions are negotiated between each NHS trust and the local RCN strike committee so it won’t be clear which services could be impacted until nearer the time. 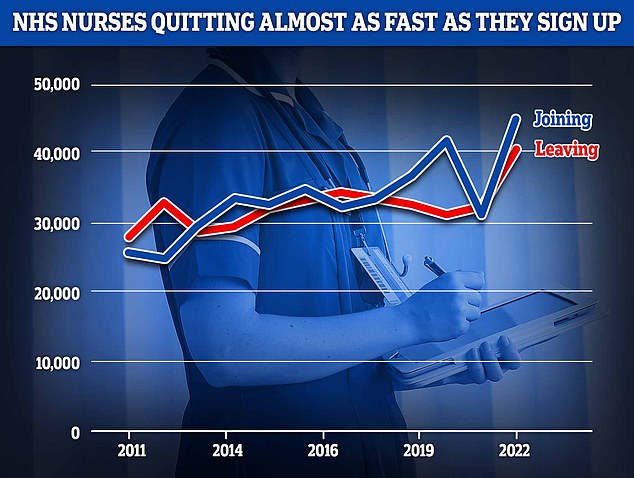 But a minimum staffing level would be in place to ensure patients have access to emergency care, urgent diagnostic procedures and they are not at risk of death or disability.

Many NHS nurses, such as those in entry level positions, earn significantly less than this, currently about £25,500, whereas senior professionals will earn more.

DR ELLIE CANNON: Does my clotting situation imply I can’t go on HRT?