Polio is continuing to spread across New York in the first outbreak to hit the state in more than half a century.

Dozens more samples have been picked up in wastewater over the past month including within New York City in Brooklyn and a ‘small area’ of Queens.

Overall there have been cases detected in five counties across the state, with the total number of positive samples now standing at 70.

Not all positive samples are a new case, because one person can shed the virus multiple times.

Only one man has been diagnosed with the virus so far, a patient in his 20s from Rockland County who fell ill in June and was left paralyzed.

He is thought to have caught the virus in the US making him the first patient to do since 1979.

Polio is highly contagious spreading through droplets from sneezes and coughs — just like Covid — or through water, objects or food contaminated with faeces.

Most people who catch the virus experience no symptoms, but in rare cases it can infect the spinal cord and cause paralysis. There is no effective treatment, but highly effective vaccines are available.

New York health chiefs say there is ‘expanding community spread’ of polio within the state. Dr Adam Ratner, a pediatrician at NYU Langone, told DailyMail.com that polio was now spreading in the state and ‘probably’ within New York City.

About one in five children under two years old have not been vaccinated against polio in New York state, posing the risk of onwards transmission.

The above map shows the five counties in New York that have detected polio in their wastewater. These are Rockland, Sullivan, Orange, New York City and Nassau

The polio being found across New York state is known as a vaccine-derived strain.

This is a virus that spreads when someone who is vaccinated with a live virus uses a piece of virus sheds some of the pathogen and it spreads to other people.

It is less likely to cause severe disease than the wild-type, but if it is allowed to spread it could evolve to become more like the original form.

The US stopped using the live jab in 2000 in favor of the inactivated polio vaccine, but other nations — such as Pakistan and Afghanistan — continue to use this jab.

Wastewater surveillance has been running in New York state since the start of the Covid pandemic, initially to help keep an eye on infections.

But 70 polio samples have been detected so far across five counties in the south of New York state, according to latest data up to October 7.

Health chiefs said the mounting positive tests put an ‘exclamation mark’ over the need to get vaccinated.

‘This underscores the urgency of every adult and child, particularly those where poliovirus has been identified, getting immunized and staying up to date with their polio immunization,’ they said.

Asked whether the virus was spreading in New York, Dr Ratner told DailyMail.com: ‘Yes, that is the evidence that we have so far.

‘We have only had one case of paralytic polio from a while back so far, but there are 70 positive samples from wastewater.’

Asked whether it was spreading in New York State he said: ‘Probably, It is certainly in the wastewater. The fact we have not seen more paralytic cases doesn’t mean that it is not spreading in the population because paralysis is a rare event.’

Health officials fear it is only a matter of time before more cases are diagnosed due to the ongoing detections in wastewater.

Most detections have been in Rockland county (37 positive samples), which is about 37 miles from New York City.

But the second-highest number of positive samples are in neighboring Orange County (16) and its neighbor Sullivan County (8).

It has been picked up in sewage water since May, and risen more than six-fold from June to August this year.

Six samples from September have tested positive so far, but this data is incomplete as more testing is being carried out at the Centers for Disease Control and Prevention (CDC).

The virus has not been detected in neighboring Connecticut or New Jersey, both states confirmed to DailyMail.com today.

A total of 63 cases have been linked to the one confirmed case, although health chiefs say he was likely not the source.

It is not clear whether the other samples are just too small to get genetic information or if they are different to the known case. 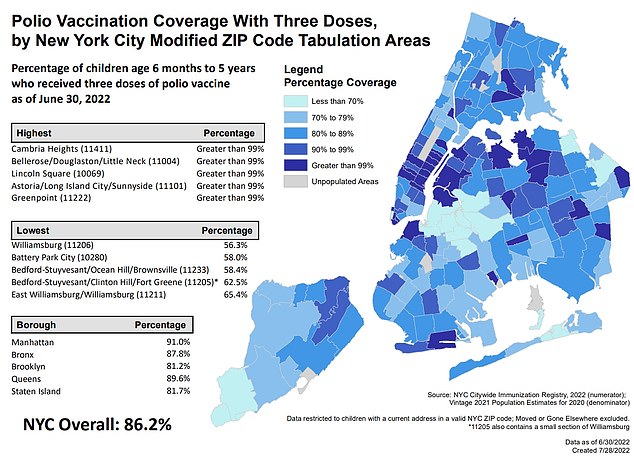 The above map shows polio vaccination rates across the city of New York for children aged six months to five years. The World Health Organization says at least 80 per cent need to be inoculated to stop the virus from spreading 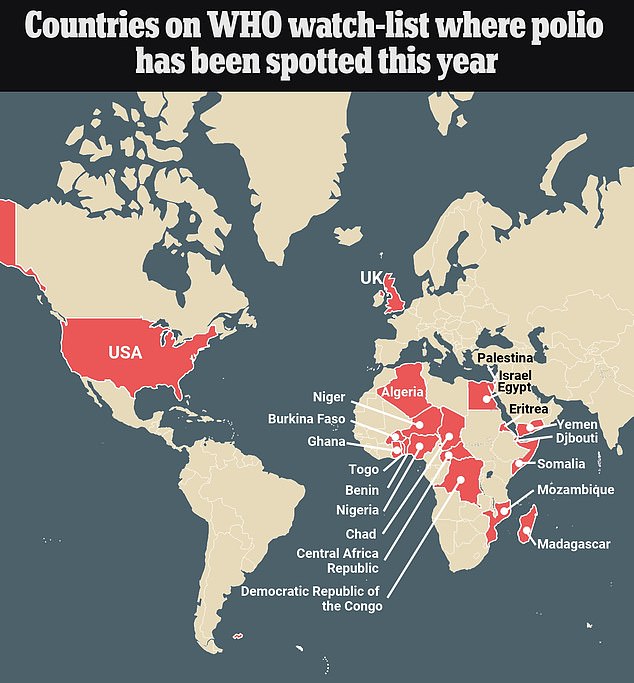 This graphic shows every country that has detected polio in 2022. It only shows nations that reported vaccine-derived strains, or weakened forms of polio from a jab no longer used in the United States that spread to other people

They said in a statement: ‘These findings put an alarming exclamation point on what we have already observed: Unvaccinated people are at a real and unnecessary risk.

‘We have seen more New Yorkers getting vaccinated.

‘These latest results are a searing reminder that there is no time to waste, especially for young children, who must be brought up to date with vaccinations right away.

‘Paralysis changes life forever. Fortunately, the response is simple: Get vaccinated against polio.’

At the end of August New York had detected just 43 positive samples of polio from wastewater.

New York has declared a state of emergency over the spread of the virus, which has seen 28,000 come forward for the jab so far.

The US has now been added to the World Health Organization’s polio list alongside the Congo, Yemen and other countries.

The polio vaccine is given in a course of three doses with one booster.

Children are called for their first jab at two months old, their second at four months, and third between six and 18 months.

The booster dose is administered between the ages of four and six years.

The World Health Organization (WHO) says at least 80 per cent of people need to be vaccinated against polio to prevent its spread.

But rates are below this in Rockland, Orange, Sullivan and Nassau counties where the virus has been detected.

Polio: Once the most feared disease in America that has now become a rarity

Polio is a serious viral infection that used to be common all over the world.

The virus lives in the throat and intestines for up to six weeks, with patients most infectious from seven to 10 days before and after the onset of symptoms.

But it can spread to the spinal cord causing muscle weakness and paralysis.

The virus is more common in infants and young children and occurs under conditions of poor hygiene.

How deadly is it?

Most people show no signs of infection at all but about one in 20 people have minor symptoms such as fever, muscle weakness, headache, nausea and vomiting.

Around one in 50 patients develop severe muscle pain and stiffness in the neck and back.

Less than one per cent of polio cases result in paralysis and one in 10 of those result in death.

Of those who develop symptoms, these tend to appear three-to-21 days after infection and include:

How does it spread?

People can catch polio via droplets in the air when someone coughs or sneezes, or if they come into contacted with the feces of an infected person.

Are there different strains?

There are three strains of ‘wild’ polio, which has been largely eradicated throughout Europe, the Americas, Southeast Asia and the Western Pacific.

Types 2 and 3 were eliminated thanks to a global mass vaccine campaign, with the last cases detected in 1999 and 2012 respectively.

Wild polio has been eliminated in almost every country in the world thanks to vaccines.

But the global rollout has spawned new types of strains known as vaccine-derived polioviruses.

These are strains that were initially used in live vaccines but spilled out into the community and evolved to behave more like the wild version.

Is polio still around in the U.S.?

The last case of person-to-person transmission in the U.S. was in 1979, which was also marked the last wild polio case.

But there have been several dozen cases of vaccine-derived polioviruses since, although they have been one-offs, with no onward transmission.

Am I vaccinated against polio?

Americans have been offered the inactivated polio vaccine (IPV) since 2000.

It is given as four doses, with the first jab at two months old. It is also administered at four, six to 18 months, and four to six years old.

Uptake has fallen slightly but remains above 90 per cent nationally.

There are concerns vaccine hesitancy has risen during the Covid crisis due to misinformation spread about jabs for that virus and school closures.

Why you actually NEED to do the Daily Mail’s crossword, in line with science

Elon Musk’s Neuralink has been ‘mutilating and killing monkeys’