A man who weighed 22st 6lbs and spent £350 a week on takeaways has shared his amazing transformation after discovering the gym when his girlfriend ended their relationship.

Nith Puvi, 26, from London, turned to comfort eating when he began suffering from depression in 2020 and started spending huge sums on restaurant meals and high-fat takeaways.

The university student soon saw his weight balloon and had to buy XXXL clothes to fit his larger body.

After his relationship ended, Nith went on a mission to get a ‘revenge body’, buying dumbbells online and doing home workouts. 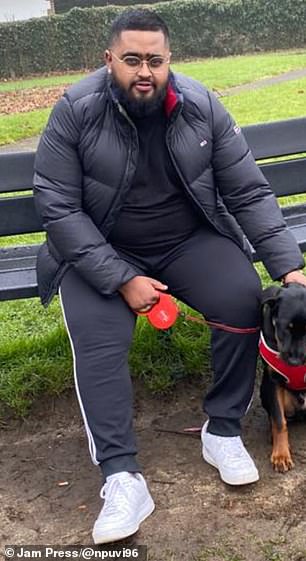 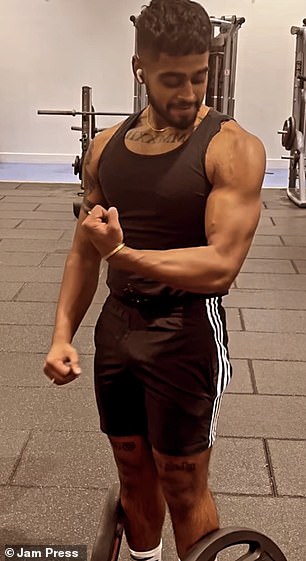 Nith Puvi, 26, from London,  who weighed 22st 6lbs at his heaviest and spent £350 a week on takeaways has revealed how the gym saved his life – sharing his incredible transformation (left and right) 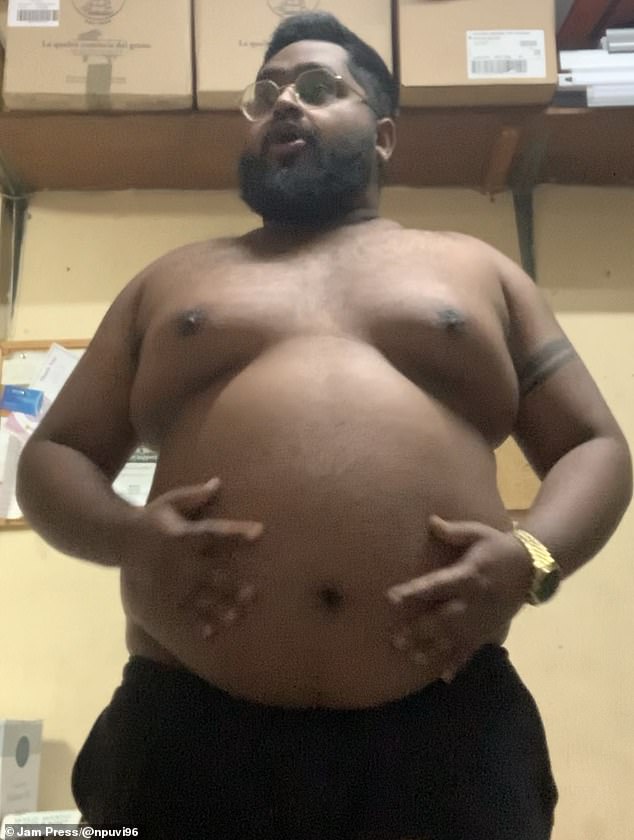 Before his incredible transformation, Nith weighed 22 stone 6 pounds, and would spend £350 a week on take-aways

He began working out five times a week, and swapped his unhealthy eating habits for more nutritional options – and within 18 months, Nith lost 11 stone and now wears a size S.

He said: ‘After losing the weight, I feel alive again. I haven’t spoken to my ex since and don’t intend to, we parted ways for a reason but she was right to split up with me because I wasn’t in a good place.

‘I was in terrible shape and just abusing myself why would you want to stick around for that?’

The turning point came when his relationship broke down.

‘I was constantly eating at home and whilst I was at work,’ he revealed. ‘Every day, I was ordering takeaways.

‘Food was my only hobby and passion at the time, it was like I was obsessed. 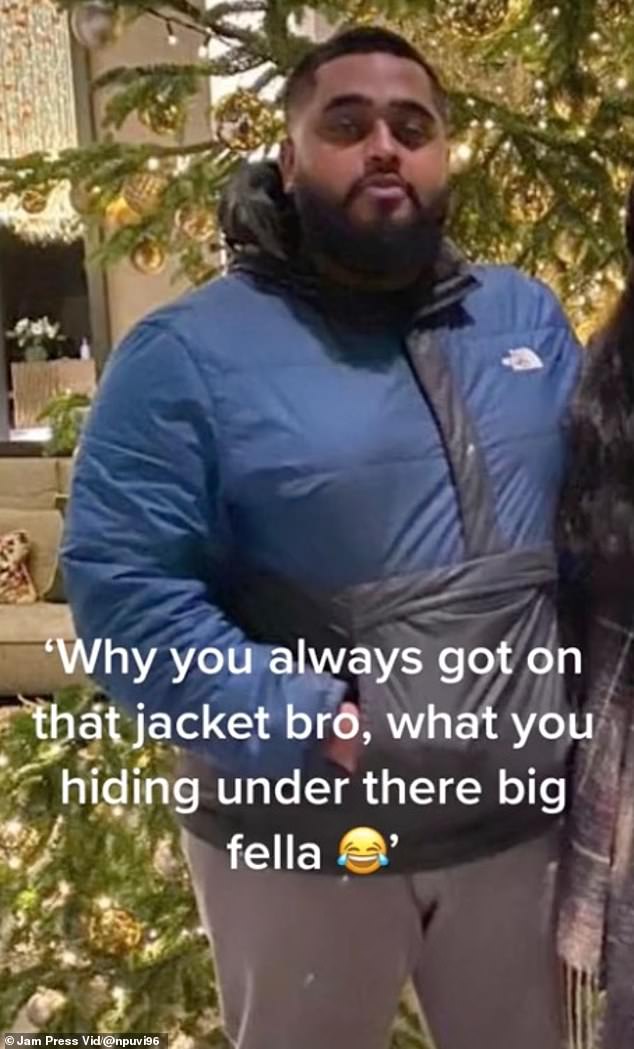 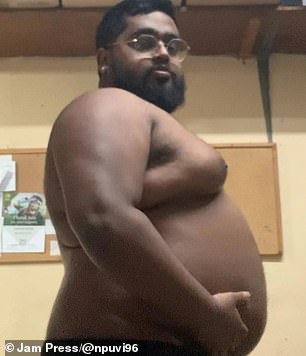 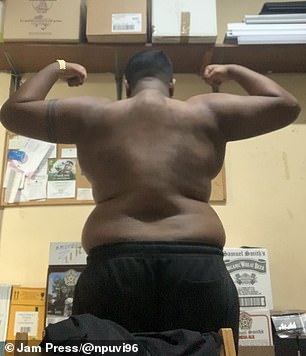 At 22 stone and six pounds Nith’s weight was dangerous, his girlfriend implored him to lose weight but instead he would eat to hide his feelings 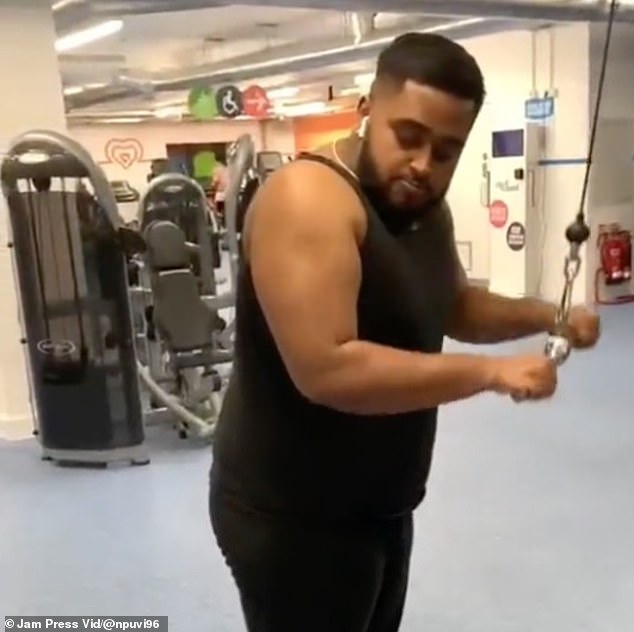 The Londoner decided to lose weight and said that the decision has ‘saved his life’ (pictured, hitting the gym) 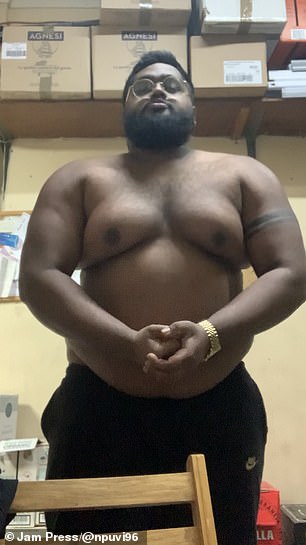 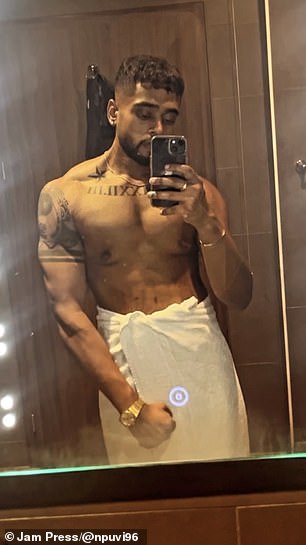 A radical transformation:  After Nith decided he would try to lose weight, he began lifting weights five times a week and practicing skipping and boxing

‘My girlfriend at the time was saying I was getting too big, so ironically to deal with that stress I would eat even more.’

‘My girlfriend at the time tried to make me change my ways, but I wasn’t happy and because I was so badly addicted to food I didn’t want to listen.

‘It always hurt when in public when we went to see friends or even her friends she’d always ask, ‘who’s punching’ or just try and insinuate I should be lucky to have her because I’ve gained weight.’

After the relationship ended, Nith went on a mission to get a ‘revenge body’ and conquer his insecurities, which ultimately saved his life.

He purchased a set of dumbbells online and started doing at-home workouts in his garage. 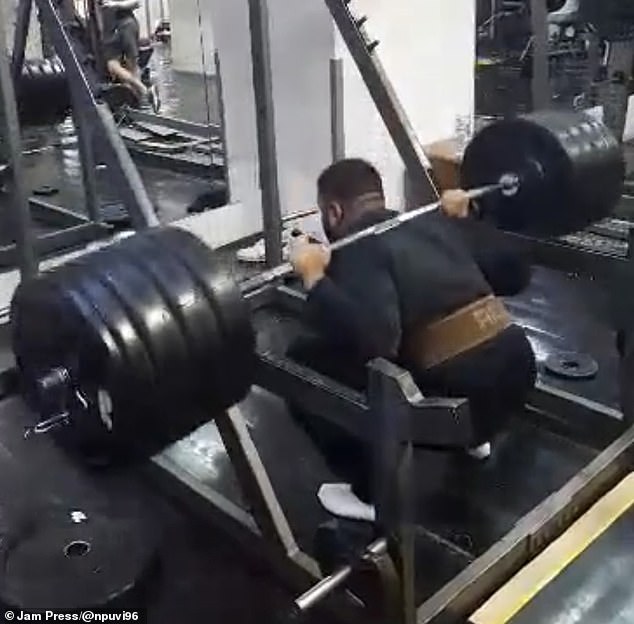 After the relationship ended, Nith went on a mission to get a ‘revenge body’ and conquer his insecurities, which ultimately saved his life (pictured) 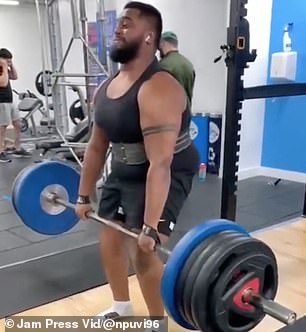 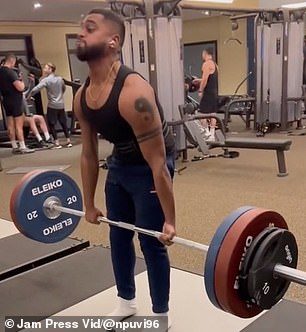 Nith during his weight loss journey, where he began weight training at the gym (left) and now, 11 stone lighter than he was a year ago (right) 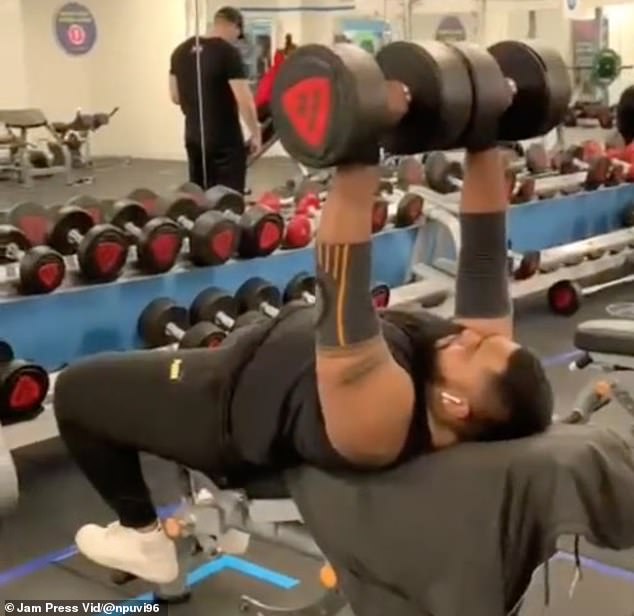 Nith began working out five times a week for up to an hour and a half each day, and started to see results in three months

He also worked on his diet, cutting out takeaways entirely and cutting his portion sizes to recommended amounts.

He said: ‘I worked out five times a week for up to an hour and a half a day.

‘I started seeing good results after 3 months. I was lifting weights up to five times a week as well as some skipping and boxing workouts.

‘I invested in some dumbbells, a bench, a barbell, resistance bands and started working out at home, also used a skipping rope and a second hand boxing bag for cardio. 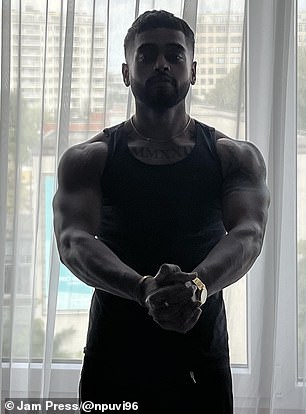 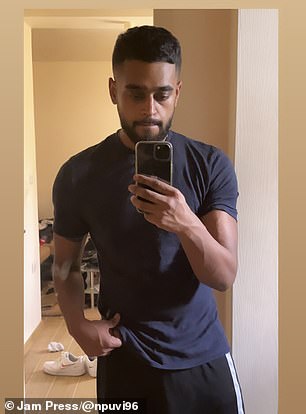 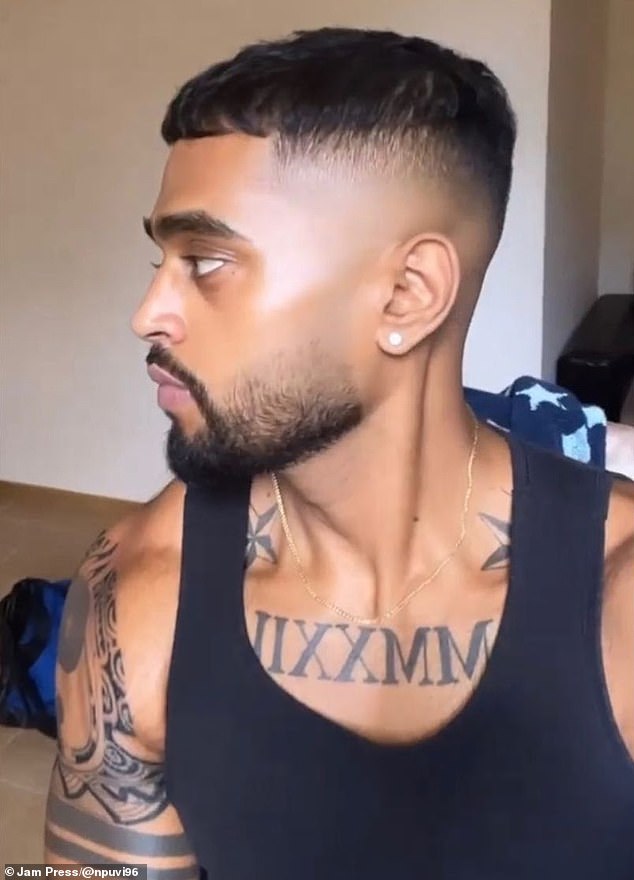 The university student totally removed his beloved take-aways from the menu, saving money in the process 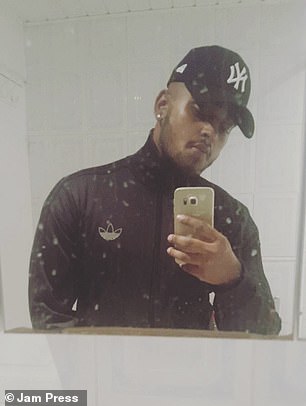 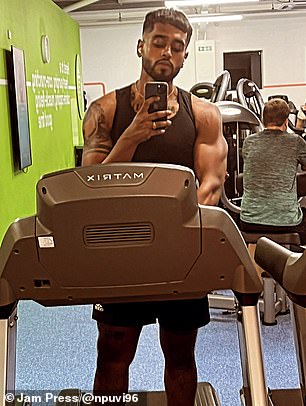 In 18 months, Nith lost 11 stone and now wears a size S – and said his friends and family have been totally shocked by his transformation

‘If I had to eat out or when I went grocery shopping, I always looked at the nutritional content and tried to avoid foods with high calories.

‘I also cut down on my carbs and tried to get in more protein instead.

‘[That’s] not to say I completely cut out carbs, but I made my diet more balanced.

‘I stayed away from adding sauces like ketchup or mayo to my meals as they had more calories, and started using hot sauces – my go-to is the Nandos Peri Peri hot sauce.’

In 18 months, Nith lost 11 stone and now wears a size S, saying: ‘I can finally look in the mirror and take pictures of myself.

‘My friends and family are all shocked of course – I’m basically a different person.

‘For the first time in a long time I feel good about myself.

‘I’m still insecure at times but definitely not as insecure and disgusted with myself as when I was 144kg.’

And speaking of his broken down relationship, he said: ‘How can you expect someone to love you if you don’t even love yourself. 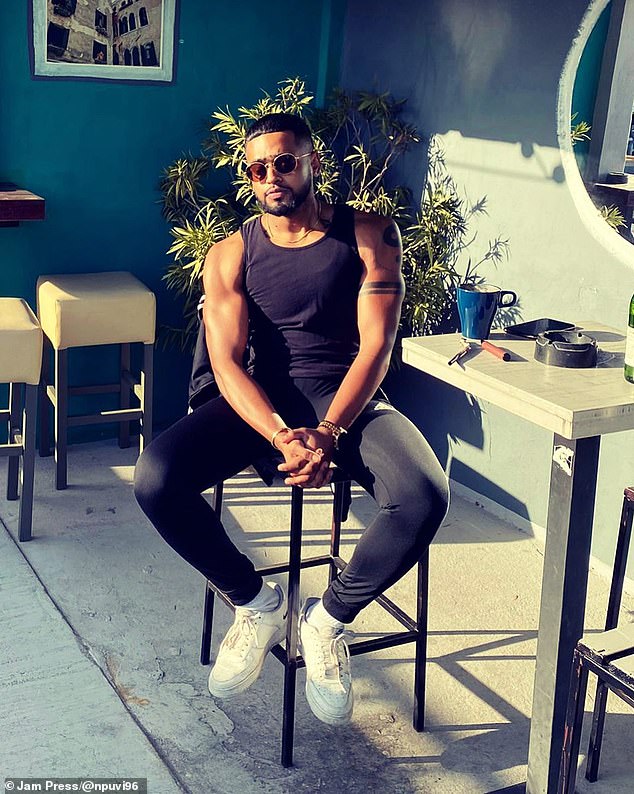 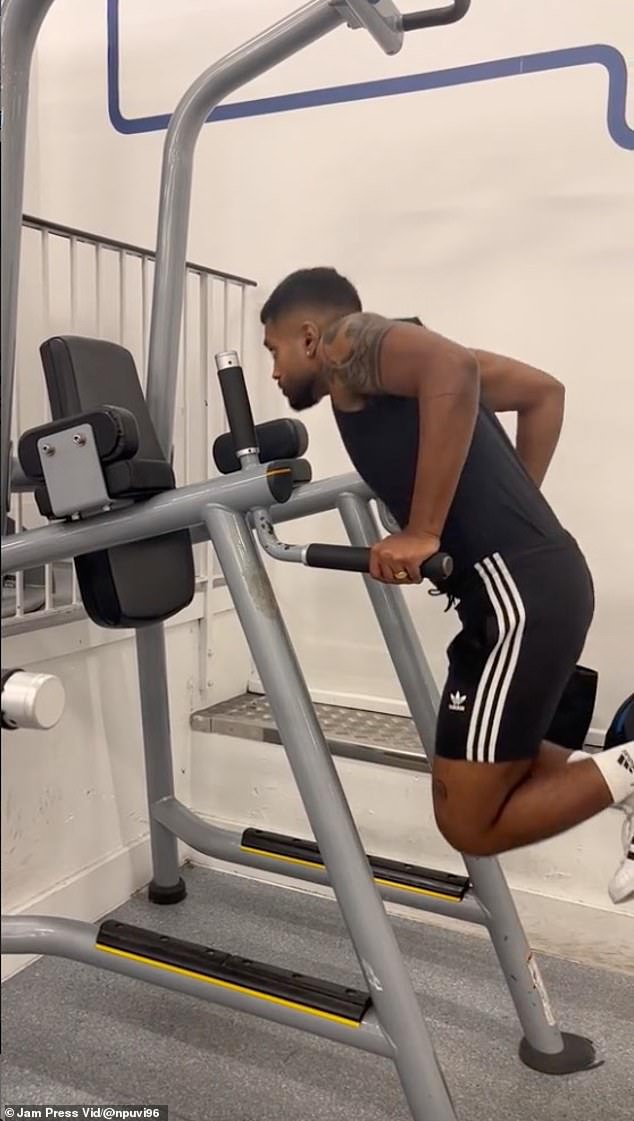 Nith is now keen to prove that anything is possible and wants to motivate others to get in shape.

He said: ‘I want to share my story in the hopes that it inspires even one person to make the change and join the gym, eat clean and train consistently.

‘Life has so much more to offer and I feel good, my health is good, my mindset is good.

‘Everything just fell into place.’

He has documented his incredible weight loss journey to his 101,000 followers on TikTok, sharing tips and tricks as well as exercise videos.

His mental health has also improved over the past year.

In one post, which has been viewed 16.6 million times and racked up two million likes, clips of Nith shares clips from his journey, culminating in his now-buff physique.

‘This is probably one of the best transformation videos I’ve seen on TikTok, you should be proud! that’s an unreal transformation,’ wrote one user.

‘From DJ Khaled to Drake,’ another viewer said.

Someone else added: ‘If it was not for that arm tattoo I wouldn’t have recognized you. Awesome job buddy.’

In another clip, which has been viewed 2.5 million times, Nathin demonstrates how he always wore a big coat to hide his body.

One viewer wrote: ‘No way is this the same person, maddd transformation.’ [sic]

‘If you can do it bro so can I,’ said another user followed by a thumbs up emoji.

‘Omg. You look handsome either way,’ said someone else.

Another stunned user wrote: ‘This motivated me to get up and work out, thank you!’