By Kate Pickles, Health Editor (medical) For The Daily Mail

Thousands of patients are dying early because pancreatic cancer is being missed on scans, a damning study has warned.

More than a third of pancreatic cancer cases (36 per cent) were potentially avoidable if they had been picked up sooner, researchers found.

But the UK study found many patients were being denied potentially curative surgery because signs were not being picked up after scans.

Researchers examined 600 scans of people diagnosed with pancreatic cancer at two NHS trusts in England between 2019 and 2021. 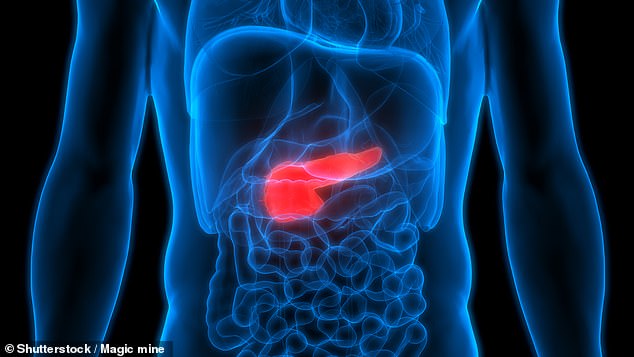 More than a third of pancreatic cancer cases (36 per cent) were potentially avoidable if they had been picked up sooner, researchers found

They found almost one in 12 were categorised as post-imaging pancreatic cancer (PIPC) cases – when a patient undergoes an MRI or CT scan that fails to pick up cancer before later being diagnosed.

In almost half (48 per cent) of PIPC patients examined, there were signs of cancer that had been missed when scans were reviewed by a specialist hepatobiliary radiologist.

More than a quarter (28 per cent) signs associated with pancreatic cancer, such as dilated bile or pancreatic ducts, were not recognised and investigated further.

Dr Nosheen Umar, lead author of the study, from the University of Birmingham, said the oversights were costing lives.

‘There is often only a very short period for curative surgery in pancreatic cancer, meaning it is vital that patients are diagnosed with the disease as early as possible to give them the best chance of survival,’ he said.

‘This will help to standardise future studies of this issue and guide quality improvements efforts, so we can increase the likelihood of an early diagnosis of pancreatic cancer, increase the chances of patient survival and, ultimately, save lives.’

Pancreatic cancer kills around 9,600 people in the UK every year, with around 10,500 newly diagnosed.

The disease kills roughly 50,000 in the US annually, with around 62,000 people getting diagnosed.

As one of the hardest cancers to spot and treat, only a quarter survive beyond a year after diagnosis.

The review, presented at United European Gastroenterology (UEG), found 48 patients failed to have their cancer picked up through their first scan but were diagnosed between three and 18 months later.

Experts said more needs to be done to spot tumours at an earlier stage before the cancer has spread.

Chris Macdonald, head of research at Pancreatic Cancer UK, said: ‘Pancreatic cancer is hard to diagnose, however detecting this devastating disease at an earlier stage, where treatment is most like to be effective, is crucial.

‘It is worrying to see the results of this study, which has shown that 36 per cent of pancreatic cancer tumours in the study group could have been diagnosed earlier.

‘We know that because of cancer location, imaging pancreatic cancer, especially at its earliest stages when small, is very challenging.

‘This study clearly illustrates that challenge and highlights the need for improvements in imaging techniques.

‘It also demonstrates that radiologists need more tools and support to ensure that we increase the likelihood of tumours being identified at the earliest possible stage.’

WHAT IS PANCREATIC CANCER?

Pancreatic cancer is one of the most lethal forms of the disease, and around 95 per cent of people who contract it die from it.

It is the sixth most common cause of cancer death in the UK – around 10,000 people are diagnosed with pancreatic cancer each year in the UK, alongside about 55,000 in the US.

WHAT IS THE CAUSE?

It is caused by the abnormal and uncontrolled growth of cells in the pancreas – a large gland in the digestive system.

WHO HAS THE HIGHEST RISK?

Around half of all new cases occur in people aged 75 or older.

One in 10 cases are attributed to genetics.

Other possible causes include age, smoking and other health conditions, including diabetes.

WHY IS IT SO LETHAL?

There is no screening method for pancreatic cancer.

Pancreatic cancer typically does not show symptoms in the early stages, when it would be more manageable.

Sufferers tend to start developing the tell-tale signs – jaundice and abdominal pain – around stage 3 or 4, when it has likely already spread to other organs.

WHAT ARE THE TREATMENT OPTIONS?

The only effective treatment is removal of the pancreas.

This proves largely ineffective for those whose cancer has spread to other organs.

In those cases, palliative care is advised to ease their pain at the end of their life.