Are YOU living in a toxic neighborhood? Map reveals 57,000 areas in the US with unsafe levels of ‘forever chemicals’

Huge swathes of the American population are living in areas contaminated by toxic ‘forever chemicals’, a study has warned.

The dangerous substances are thought to be in more than 57,000 neighborhoods across the country — with hotspots in every state.

They are used to make thousands of everyday items including food packaging, carpets, clothing and cooking pans.

The toxins are dubbed ‘forever chemicals’ because they do not break down in the environment and can take years to degrade in the body.

They have been linked to cancer, birth defects, and infertility.

Dr Phil Brown, director of Northeastern University’s Social Science Environmental Health Research Institute and paper co-author, said: ‘While it sounds scary that there are over 57,000 presumptive contamination sites, this is almost certainly a large underestimation.’ 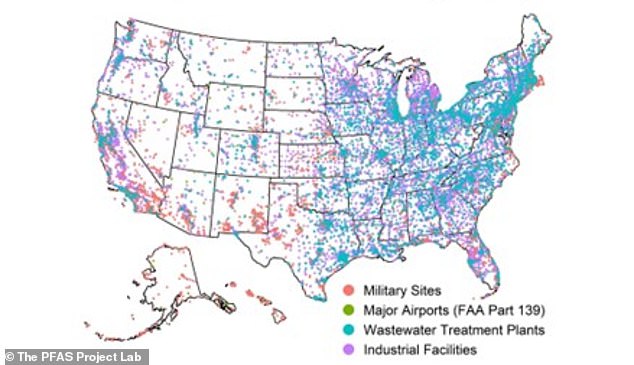 Huge swathes of the American population are living in areas contaminated by toxic ‘forever chemicals’, a study has warned. The dangerous substances are thought to be in more than 57,000 neighborhoods across the country — with hotspots in every state. They are concentrated near industrial facilities, wastewater treatment plants, military bases and major airports 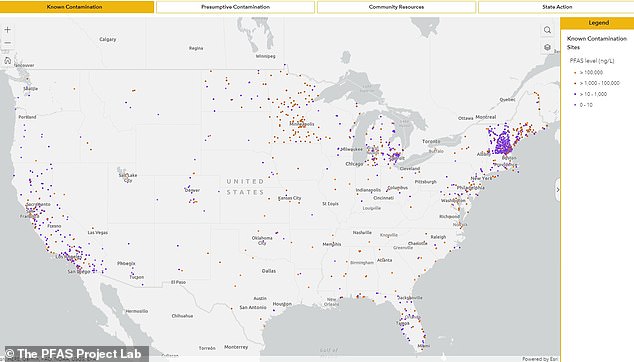 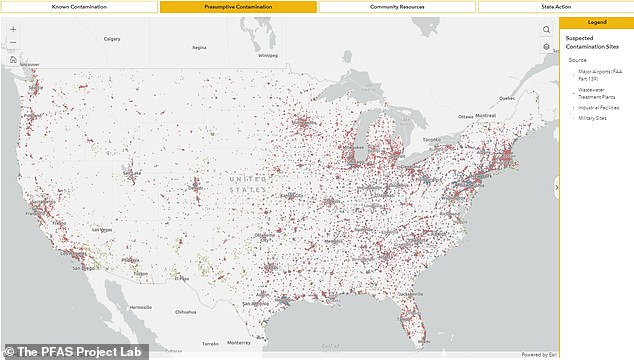 What ARE ‘forever chemicals’?

‘Forever chemicals’ are a class of common industrial compounds that don’t break down when they’re released into the environment.

Humans are exposed to these chemicals after they’ve come in contact with food, soil or water reservoirs.

These chemicals — known more properly as per- and polyfluoroalkyl substances, or PFAS — are added to cookware, carpets, textiles and other items to make them more water- and stain-repellant.

PFAS contamination has been detected in water near manufacturing facilities, as well as at military bases and firefighting training facilities where flame-retardant foam is used.

The chemicals have been linked to an increased risk of kidney and testicular cancer, and damage to the immune system, as well as birth defects, smaller birth weights, and decreased vaccine response in children.

The researchers did not actually test samples from all 57,000 sites in the US.

Their estimates were based on a computer model that drew on data from previous testing at confirmed contamination sites and extrapolated the findings to the rest of the country using precise coordinates.

To check whether it was accurate, they applied the model to 500 places where they knew PFAS contamination had been confirmed.

The program picked up on 72 per cent of the sites were picked up by their technique, which led the researchers to believe they have underestimated the scale of contamination.

Dr. Alissa Cordner, co-director of the PFAS Project Lab and senior author of the study, said: ‘Testing for PFAS is essential in order to understand the scope of PFAS contamination across the globe, and it also is necessary to protect public health in specific communities.

‘There can be disincentives for PFAS testing – for example, testing is expensive, there are currently no federal regulatory levels for PFAS in drinking water and so it’s not always clear what action should be taken when PFAS are detected, and remediation can be extremely costly.

‘However, we also know that PFAS appear to be toxic at extremely low levels of exposure, so it is essential that more testing is done to identify where PFAS contamination poses a risk to the public.’

The findings were published in Environmental Science & Technology Letters.

In June, the Environmental Protection Agency (EPA) lowered its recommended limit of PFOS in drinking water from 70 ppt to 0.02 ppt, showing that no amount of exposure to the substance is safe.

Intermittent fasting can reverse sort 2 diabetes in in MONTHS

Strep A contemporary: How ‘tripledemic’ is making sickness WORSE