An ex-NHS worker may be forced to have her hip, part of her pelvis and the rest of her leg removed after doctors dismissed a cancerous lump in her foot.

Sharon Walker, of Nant-y-moel, Wales, noticed the lump on her left foot in January last year and decided to visit her GP after becoming concerned.

The mother-of-two was diagnosed with lymphoedema — a chronic tissue-swelling condition — but she knew something wasn’t right and asked a colleague to have a look at it.

They told the 53-year-old to have a scan, which in June revealed that she had a soft-tissue sarcoma — a rare form of cancer.

In August that year, she had surgery to remove the 7cm (2.75in) lump and had a skin graft from her arm attached to the foot.

But doctors did not get all of it and the disease continued to spread up her leg. She found another lump in the lymphnodes in her groin around Christmas.

Ms Walker had to have her foot amputated — but even that did not slow the spread, despite having chemotherapy.

She had to leave her role as a secretary in a hospital diabetes department because of her condition, which has left her wheelchair-bound.

Ms Walker moved back in with her ex-husband because he has a downstairs toilet and her student daughter Ffion, 23, acts as her full-time carer. 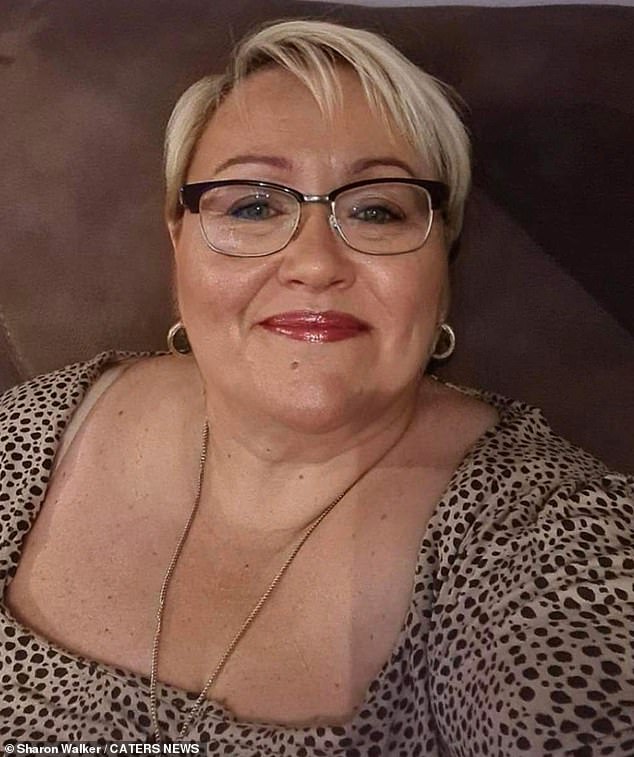 Sharon Walker, 53, from Nant-y-moel, Wales, noticed the lump on her foot in January last year and decided to visit her GP after becoming concerned. It turned out to be a soft-tissue sarcoma 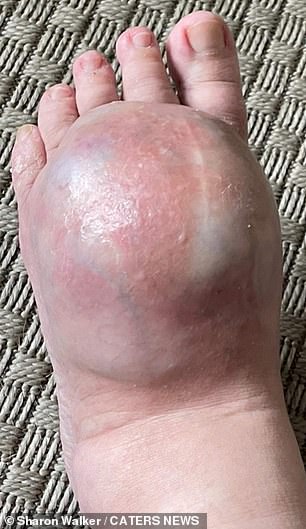 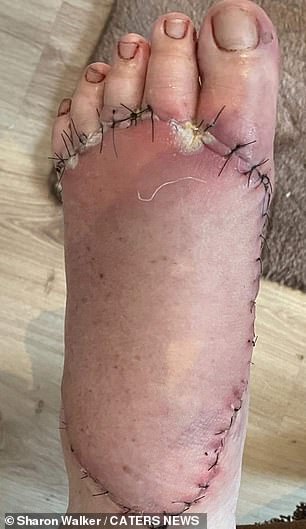 A former NHS worker from Nant-y-moel, Wales, may be forced to have her hip, part of her pelvis and the rest of her leg removed after doctors initially thought cancer in her foot was just swelling (left). she had surgery to remove the 7cm (2.75in) lump and had a skin graft from her arm attached to the foot (right) 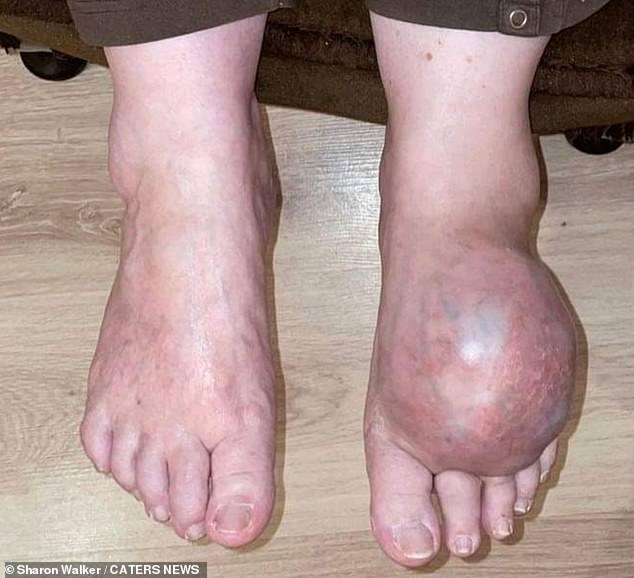 Sarcomas are uncommon types of cancer which can grow anywhere in the body – on muscle, bone, tendons, blood vessels and fatty tissue.

Bone sarcomas are rare and affect approximately 670 people per year – but there are other types of bone cancers.

There are around 100 different types of sarcomas and about 5,300 people are year are diagnosed with them in the UK.

Sarcomas can be treated well if people catch them early, but many people do not get diagnosed until their tumours are about the size of a tin of beans.

Only slightly more than half of people with sarcomas (55 per cent) survive for five years or more after their diagnosis.

Symptoms of sarcomas can include bone pain, swellings or lumps, and restricted movement if it is growing near a joint.

Treatment may involve typical cancer therapies such as surgery, chemotherapy or radiotherapy.

Now, she faces the terrifying possibility of having the rest of her leg, hip and part of her pelvis removed if her last chemotherapy sessions in December do not prove successful.

Around 4,300 people in the UK and 13,000 in the US are diagnosed with soft-tissue sarcomas every year.

They can be caused by genetic conditions like neurofibromatosis type 1 and retinoblastoma, as well as previous radiotherapy for a different cancer.

Exposure to some herbicides also increase the risk, while the chance of developing one also increases with age.

Treatments include having surgery to remove the tumour, as well as radiotherapy and chemotherapy to kill off any remaining cancer cells.

Recalling her ordeal, Ms Walker said: ‘One day I went to put my shoes on, and one felt quite tight, so I visited my GP who diagnosed me with lymphedema [a tissue swelling] but I knew it wasn’t that.

‘He recommended I keep resting it and told me to make sure it was elevated above my heart to reduce the swelling, I just looked at him like “what the hell”.

‘During this time, I worked for the NHS, so when I was at work, I got one of the podiatrists to have a look and they said I needed a scan. I was referred and had one the following week.

‘When I got the results, they diagnosed me with a sarcoma which really scared me.

‘By this point it was very swollen, so they referred me to a plastic surgeon at the Morriston Hospital in Swansea.’

Ms Walker had a CT scan, biopsy and ultrasound before finding out an operation was needed because the lump was continuing to grow.

Surgeons took a flap of skin from her arm to cover the part of her foot where the tumour was taken out from in August.

She said: ‘It was at least seven centimetres when the doctor’s performed the surgery and skin graft.

‘During surgery I had all the muscles taken out of my toes so I couldn’t move them, and I’m now left with a massive scar on my arm from where they removed flesh for the skin graft.’ 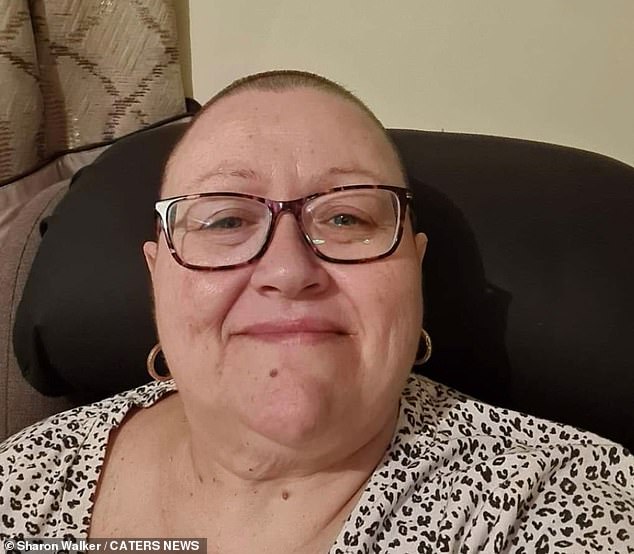 She had to have her foot amputated — but even that did not slow the spread as agonising, pus-filled lumps formed up her leg despite having chemotherapy

She said: ‘They decided to amputate my foot. I couldn’t believe it, but I just knew I had to do it if it would save my life.’

Despite being petrified of the possibilities she faces, Ms Walker states she’d rather live a life disabled than think about the morbid alternative.

She said: ‘The thought of this operation scares me, but I would have it if it would save my life.

‘I have another scan coming up which will tell me if the cancer has spread so fingers crossed it hasn’t.’