By Ben Palmer For The Scottish Daily Mail

First Motherwell in Ireland, now this abject humiliation in Holland. Dundee United’s trip to Alkmaar quickly became the sort of occasion watched through the cracks of the fingers.

After the optimism that followed last week’s 1-0 win at Tannadice, Jack Ross’ team were pulled to bits by AZ. A seven-goal hiding – it could and should have been more.

Welcome to the city of cheese? The Tangerines simply melted away, the 7-0 scoreline matching Barcelona’s hammering of Celtic and Malmo’s demolition of Hibs as the worst-ever defeats by Scottish sides in Europe. 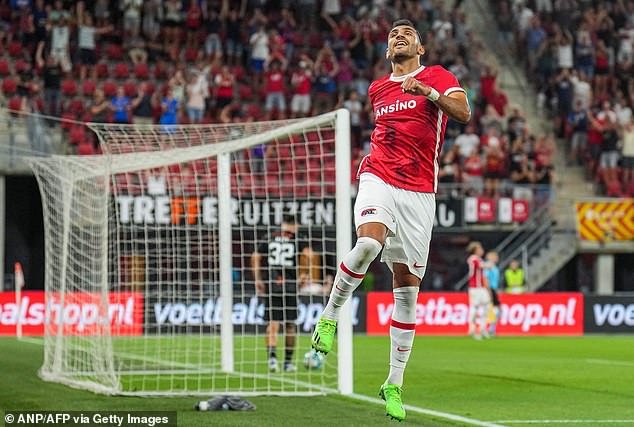 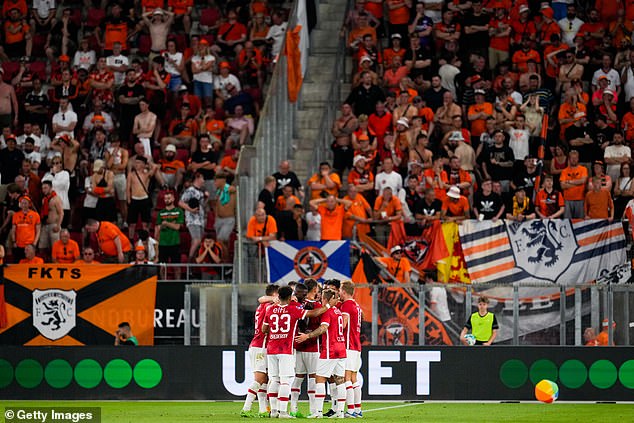 The visitors were five ahead inside the first half on one of those nights that makes Scottish football cringe with embarrassment. Sligo was awful all right, but this was horrendous despite the undoubted pedigree of the Dutch side, and the inquest will now begin into how it went quite so spectacularly wrong for United in the Europa Conference League.

There was not one player in the visiting team deserving of pass marks. Aziz Behich made his debut at left back and will hope this was a one-off. Charlie Mulgrew was torn apart. Goalkeeper Mark Birighitti turned in a performance that will give him nightmares for the rest of his career.

Any notion that United could progress from this third qualifying-round tie after Glenn Middleton’s wonder goal in the first leg was rapidly extinguished.

AZ were tidy on the ball and played some great football, but even they must have been stunned at just how easy it was for them.

Vangelis Pavlidis and Tijjani Reijnders both hit doubles in the first period, before Hakon Evjen scored a fifth before the interval.

They took their foot off the gas after Dani de Wit scored their sixth just moments after the second half had started, prompting a mass exodus of disgusted United fans. 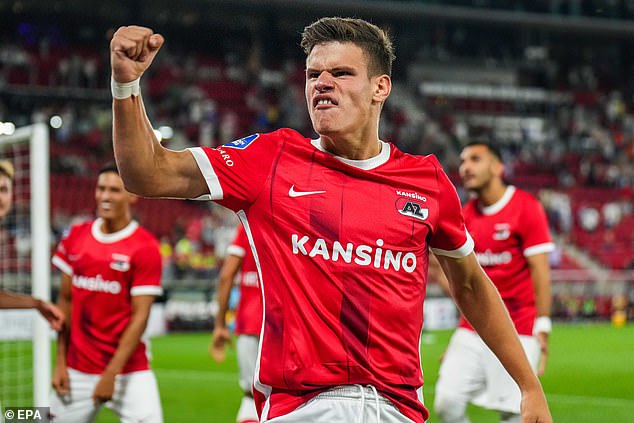 Mayckel Lahdo scored a seventh after 74 minutes and, if the home side had kept going, they could have easily hit double figures.

Ross’ men travel to face Hearts on Sunday and there is now a very different perception around the club from a week ago.

The weekend defeat to Livingston was disappointing, yet how they respond to this hiding has become vital. They can’t allow their campaign to get away from them before it has even begun.

Over 2,000 United supporters made the short trip over the North Sea but only 1,300 had tickets for the fixture. They lapped up the local culture during the day and, despite reports of minor scuffles with home fans, were largely lauded for their behaviour.

How rosier the picture had seemed earlier on the trip with a jovial pre-match party at the Nieuwmarkt area of Amsterdam on Wednesday evening, with a post-bash clean-up operation by the fans welcomed by local cops.

For United fans, it was their first European trip since their side suffered a 5-0 thrashing at the hands of Moscow Dynamo ten years ago. It was also their first visit to Holland since Jim McLean’s side beat PSV Eindhoven 2-0 in 1982. The pre-match talk of following in the footsteps of Wee Jim’s team on the continental stage was to sound sickeningly hollow.

The travelling fans were treated to a pre-match rendition of club anthem Love is in the Air before kick-off but the pleasantries ended once they finished singing John Paul Young’s 1977 anthem. 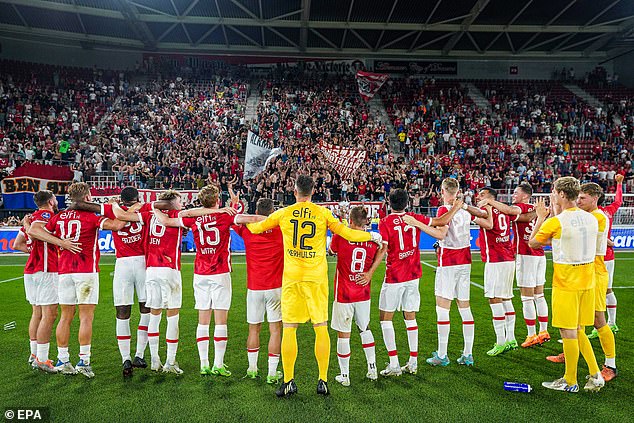 AZ had the first chance of the evening in the sixth minute when De Wit sent a low cross into the box towards Pavlidis. The Greek cap could only shoot straight at Birighitti from close range.

Evjen followed that up shortly afterwards with an ambitious effort from 25 yards that floated harmlessly over the crossbar. United actually appeared to be settling well and a couple of deliveries at set-pieces by Dylan Levitt had the home defence scrambling.

An Evjen shot slid just wide of the post, but it took an important stop from Birighitti to deny the midfielder in the 20th minute, the Australian getting down well to his left to claw the ball away from goal. It was clear the hosts were beginning to go through the gears.

Quite how quickly became apparent in the 21st minute. Pavlidis, who had previously tasted defeat in Europe to Celtic and Rangers before the loss at Tannadice, was on hand to finish a fine move. It was the type of goal typical of Dutch teams, with Reijnders displaying great awareness as he sent a piercing pass through the United defence into the path of Milos Kerkez, whose first time cross was tapped into the net by Pavlidis.

Ian Harkes forced a good save from Hobie Verhulst with a stunning overhead kick as United looked to restore their lead in the tie but, after 31 minutes, they were two behind and chasing the game. 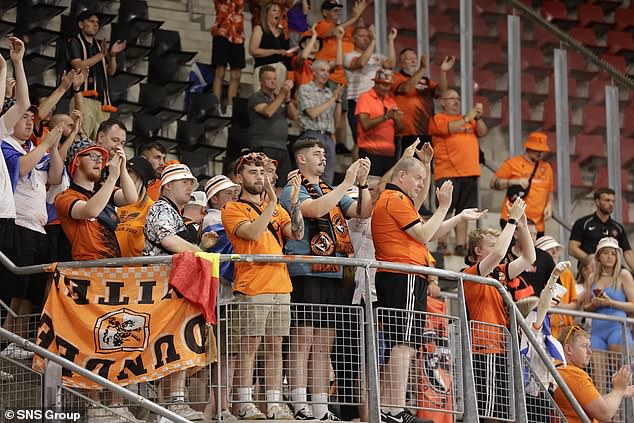 Around 1,300 Dundee United fans had tickets but many left when it was 6-0 at 46 minutes

There was a degree of fortune in the way the ball broke to Reijnders from Craig Sibbald’s attempt to intercept a flowing AZ move, but there was nothing lucky about the finish with the ball flying into the bottom corner from 20 yards.

Five minutes later, it was three and game over. Evjen swung in a corner which saw Birighitti attempt to punch clear and then completely miss the ball, allowing Pavlidis to nod in at the back post.

The fourth came in the 41st minute. Pantelis Hatzdiakos was afforded far too much time in the box and his cutback was dispatched by Reijnders for his second. By half-time, it was five and Birighitti could only look on as Evjen lashed the ball into the top corner from the edge of the box.

The second half was 50 seconds old when Se Wit scored the sixth. The United fans who headed out the stadium had the right idea, as they missed the ignominy of Lahdo scoring the seventh to consign the visitors to a historic defeat.

Pierre-Emerick Aubameyang attacked in terrible theft at his house